Share All sharing options for: Wondolowski strikes again for the San Jose Earthquakes in 4-1 defeat to the Kansas City Wizards 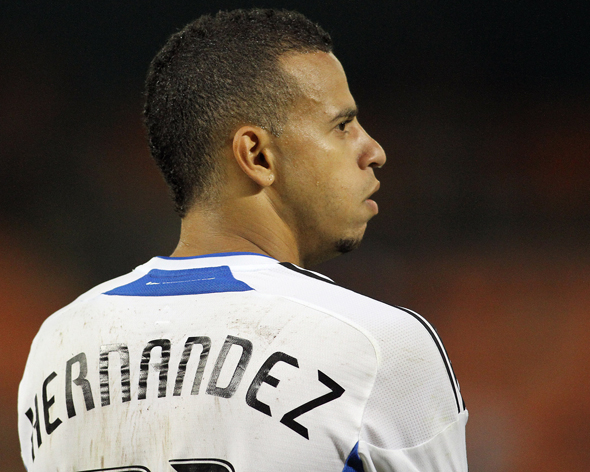 Jason Hernandez and the San Jose Earthquakes defense suffer their worst loss of the season to the Kansas City Wizards by a score of 4-1. Photo: Tony Quinn, isiphotos.com

Often times when you think of the Great Plains, images of flat expanses of land stretching in all directions come to mind. Maybe the San Jose Earthquakes had those very thoughts Saturday night at CommunityAmerica Ballpark, as they seemingly mailed in a flat performance in a 4-1 loss to the Kansas City Wizards.

A hat trick from forward Birahim Diop highlighted a Wizards attack that made the Quakes sturdy defense look rather ordinary. Add on a stoppage time own-goal from defender Jason Hernandez, and the nightmare of a match for the back four was complete.

The Earthquakes lone goal came courtesy of, you guessed it, Chris Wondolowski. He tapped in a sitter off a beautiful cross from Geovanni that was set up by fellow forward Ryan Johnson. Wondolowski’s goal was his 18th of the season, and moved him ahead of the Galaxy’s Edson Buddle in the race for the MLS Golden Boot award. The Wondo goal was also the 10th in a row for the Quakes, which sets a new MLS record for consecutive team goals scored. The plaudits on the night may still continue for the league’s feel good story, as Wondolowski’s exploits completed an MVP-worthy season.

The Earthquakes starting line-up featured the usual cast of characters favored by head coach Frank Yallop — and possibly signaled the eleven players he will select to face the New York Red Bulls in next weekend’s playoff match-up. Johnson looks to have earned the right to start up top with designated player Geovanni in Yallop’s preferred 4-4-2 formation. Chris Leitch and Tim Ward were the outside backs against Kansas City, while veteran Ramiro Corrales entered the game as a substitute to start the second half. Khari Stephenson made the start in midfield, but was spelled by Scott Sealy in the 62nd minute. Both Substitutes proved to be more active than their predecessors after taking the field, possibly giving Yallop something to think about as he plans his starting XI for Saturday’s match against the Red Bulls.

The Earthquakes began the first half like a team with nothing to play for — a sentiment that would have made more sense coming from their opponent. Missed passes, a lack of offensive continuity, some suspect positioning on defense: nothing like the team has shown during previous road matches where the Quakes have collected 6 victories and 22 overall points.

“Typically we are very difficult to break down away from home,” said Yallop after the match, “although tonight it looked pretty easy. We prepared the team exactly as we have all season, you play to win and we just didn’t show well tonight. Getting beat is one thing, but getting beat 4-1 never feels good and we will just have to move forward.”

The first goal from Diop in the 36th minute was an unusual giveaway for the Quakes, but a just reward for the effort of the Wizards in the first half. With the back four trying to keep the forward in an offside position, they were out of place to prevent Diop from heading the free ball over an onrushing goalkeeper Jon Busch and into the back of the net for the 1-0 lead.

The second half was not much better for the Quakes, as some lethargic defense in the 60 minute allowed Diop to beat Busch one again. With Brandon McDonald marking the Senegalese forward in front of goal, he was first to a deflected cross just outside the six-yard box that he netted for the 2-0 lead.

The Earthquakes, who had been showing more life in the second half, were finally able to respond to the Wizards one-sided play when Wondolowski scored in the 70th minute. After taking an outlet pass from Johnson on the left side of the area, Geovanni sent a smooth cross toward the far post that found the unmarked Wondolowski. He coolly tapped the ball past goalkeeper Eric Kronberg to halve the deficit 2-1.

Any momentum the visitors hoped to earn from the goal was quickly erased when Diop scored his third on the night from an elegant piece of skill. Collecting the ball while in stride toward the Quakes area, he half-volleyed a shot from 25 yards that dipped over Busch and into the goal. It was a remarkable effort that rewarded the forward for a remarkable evening.

“I thought after our goal we were really pushing hard for the next five minutes,” said Wondolowski to describe the sequence of events, “then Diop hits a wonder strike, and they get the momentum right back. Soccer is a funny game like that sometimes.”

Perhaps it was funny for the home side, as they added another goal in stoppage time when a miscue from Hernandez gifted the Wizards a 4-1 final score. However, this was not exactly the kind of performance the Earthquakes wanted to give leading up to the postseason.

“Plain and simple, we just got beat,” stated Busch in a very somber postgame locker room. “What else can you say, credit to them. Hopefully for us it’s a wake up call for the playoffs. We are a good team, but we can’t just show up and play. In this league no one can just do that, we have got to be better, everywhere. Every single one of us, it just wasn’t good enough. We just have to take this one and throw it away.”

With a week to prepare for the New York Red Bulls and the start of the MLS Cup playoffs, the Quakes will be happy to leave the Kansas City loss in the proverbial trash can and get ready for Saturday’s 7 p.m. match at Buck Shaw stadium.