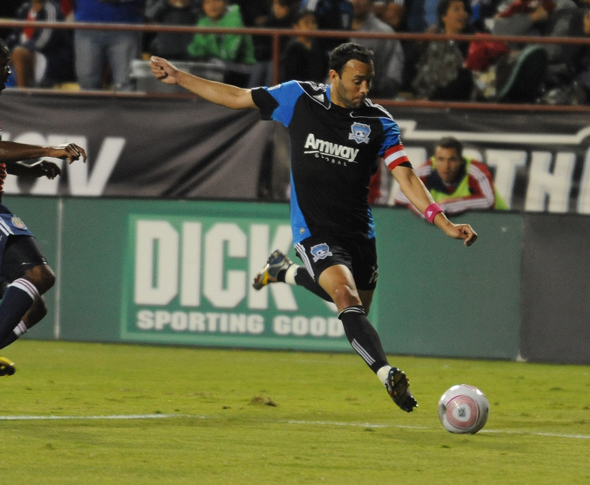 It was sunny and breezy over at the NTF Tuesday morning, as the San Jose Earthquakes continued their preparations for their MLS postseason opener this Saturday night against the New York Red Bulls. And while I often am lucky to be joined by one or two other media members, this training session featured TV cameras and other reporters lining the eastern sideline. For everyone in attendance, the Quakes put on a spirited and intense workout and scrimmage in their first meaningful after season practice since returning to MLS in 2008.

Looking to distance themselves from the embarrassing performance put up against the Kansas City Wizards last weekend, the players did not let up over the nearly two hour practice as they went through passing drills and a full 11 v. 11 scrimmage. The defenders in particular were vocal during the run of play, with Jon Busch at his part barking out direction and encouragement. Tim Ward was back out on the right side where his clearances and crosses were more effective. Ramiro Corrales worked the left side of the field with midfielder Bobby Convey in a fashion not seen since the early part of the regular season. Corrales still looks less than 100% fit — evident on the weekend as well during his second half appearance against KC — but looks more and more ready to contribute significant minutes in the two-game series with New York. Coach Frank Yallop suggested that if Captain Corrales continued to show well during the week, he would be in line to make the starting XI this Saturday at Buck Shaw Stadium.

Other highlights from the low scoring scrimmage were Geovanni’s two beautiful crosses for assists in the first half, and Jason Hernandez and Brandon McDonald locking things down for the entirety of the match and giving up little for Busch to worry about in goal. Scott Sealy continued to distinguish himself in the center of midfield with excellent distribution and toughness just below Chris Wondolowski and Ryan Johnson. Sealy integrated very well into the Wondo-RJ-Geovanni offensive triumvirate as the withdrawn forward/attacking midfielder — much like he was able to show in the Chivas USA and KC Wizards matches — and looks to have the inside track on significant minutes in the Red Bulls series.

Brazilian striker Eduardo featured for the second XI, as he has often done during Quakes training sessions late this season. He worked well with Khari Stephenson to share possession, but was never given enough space to work with by a motivated defensive side. Still, he is healthy and fit, providing Yallop with a first offensive substitute off the bench. Overall, the eleven starters and three substitutes that played in Kansas City are clearly in line to do the same against New York. I suspect that the starting line-ups will be slightly different — Corrales starting over Leitch for example — but those players in form will earn the minutes.

Other news and views from the NTF to share: goalkeeper Joe Cannon was back on the training field — for the first time without a walking cast and crutches. The Quakes favorite kept his workout to the side, but showed that the ankle is feeling much better. He even broke a sweat on the day, and looked pleased to be able to participate with the team in training once again. Andre Luiz was there as well, walking around and interacting with his teammates, but he remains shut down for the season and was just lending moral support. No updates on Cornell Glen and his injured right hamstring, but I would not expect to see him on the field this weekend against New York.

Lastly, Wondolowski was all smiles on the day, as was to be expected, and the preponderance of unfamiliar television cameras were there to interview the 2010 MLS Golden Boot winner. After running that gauntlet, Wondo still had the energy to talk with myself and the other beat reporters, where he refused to get into a war of words with Landon Donovan over the Galaxy midfielder’s comments about teammate Edson Buddle being more deserved of MLS recognition and being at a disadvantage while away for U.S. National Team duty. The Quakes leading scorer refused to take the bait, and responded that he would gladly trade the Golden Boot trophy for a trip to play in the FIFA World Cup. Well played Wondo, and so very true.