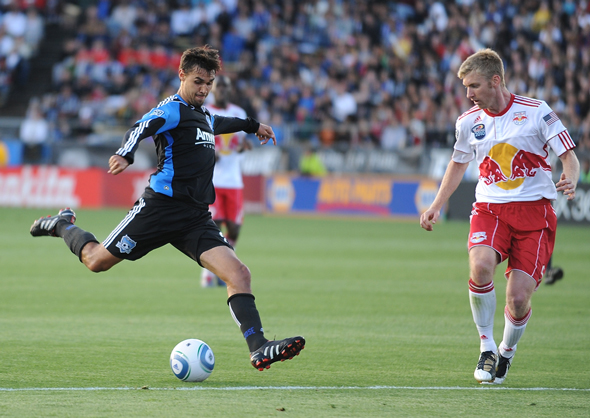 The Playoffs are coming! The Playoffs are coming! In case you haven’t heard, the New York Red Bulls are in town tonight, minus some important players, to take on the San Jose Earthquakes in the first leg of their home-and-home first round playoff series. Kick-off is at 7 p.m. tonight at Buck Shaw stadium, and gates open early for the festivities. In fact, show up early wearing all seven of your win pins from the season, and get a chance to watch the two teams warm-up from the field. Just be careful not to stick a leg out and trip up Dane Richards or Rafa Marquez…

As I am sure you have already heard, Center Line Soccer put out two podcasts this week in preparation of the weekend. First off was an enlightening conversation with long-time New York Times soccer columnist Jack Bell. If you just want the outline of that conversation, JB sums it up for you in this feature article. The second show focuses on the Earthquakes players and head coach Frank Yallop. You’ll hear lots of talk with the defenders, as Jay and I saw this two game series shaping up to be a defensive battle. In fact, given how poorly both teams have fared this season when giving up the first goal of the game, neither side will want to concede early. At the same time, both offenses take advantage of their wing play and sniper-like accuracy from the striker position — that’s you Wondo — and will not be shy about racing forward when in possession.

Being as you can never read enough pre-game chatter to get psyched up for tonight’s match-up, I bring you a compilation of articles to distract you from watching college football all day long:

Starting us off is a primer from local reporting legend Elliott Almond over at the San Jose Mercury News. I’ll even give you an additional link for EA — his take this week on the success of Chris Wondolowski and its origins.

Center Line Soccer alum Jeff Carlisle always delivers the goods, so much so that ESPN snatched him away from our cadre of writers in an effort to legitimize their own publication. JC stays the neutral in his preview, even going so far as to pick the Red Bulls to win the series. We’ll see if I buy you a drink, Jeff, in Toronto…

Back on the East Coast, Michael Lewis at Big Apple Soccer keeps it real by actually writing that the Red Bulls could be upset by the Quakes. Maybe he is hedging his bets, but I like his reasoning. And remember this: each of the past two seasons, a #8 seed has defeated a #1 seed in the first leg of the MLS Cup playoffs.

Local press box denizen Nicholas Rosano of Goal.com gives his breakdown of the match, and looks ahead to the return leg next Thursday. The short turnaround between games may have more of an effect on the Red Bulls given their injuries, but don’t bet out Thierry Henry returning to play in the second match.

Good friend Ray Curren at the World Soccer Reader website takes a look at the matches and comes away with the opinion that the Earthquakes will win 3-1 on aggregate. I'm sure RC will have some new fans here in the Bay Area if that scoreline comes to pass -- maybe even some of those folks in that nice picture you used for the article.

Lastly, I made the podcasting rounds this week with a couple appearances representing San Jose. First was my recurring role on CSRN’s Around the League show, and second was a guest appearance on the Seeing Red podcast out of New York. Yes, a friendly bet has been accepted, but I have no intentions of wearing an energy drink logo across my chest any time soon. Git-R-Done Quakes!

I know some of you have called me out on what I said recently about the Earthquakes, but no worries. As such, I add the disclaimer that my “expert” opinion is based on what I observe both at games and at training. While having good form in games is important, of near equal importance is good preparation and performances at the training ground. With that in mind, I believe we’ll be seeing Ramiro Corrales and Scott Sealy in the starting line-up tonight against New York, and Ryan Johnson will again get major minutes. Yallop plays to form, not favorites, and these guys are getting the job done on the field and in practice.

I’ll see everyone out at Buck Shaw tonight — I’ll be the one wearing the Quakes jersey in Section 103.