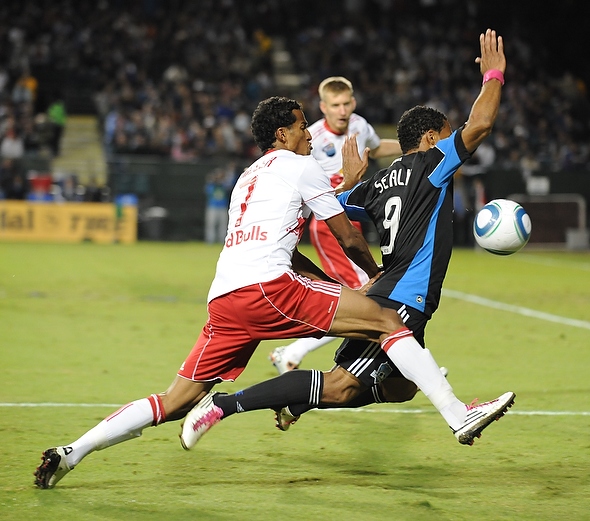 SANTA CLARA — Saturday night saw the long-awaited return to the MLS playoffs for the San Jose Earthquakes, but the boys in black struggled to look anything like a playoff side, disappointing a sellout crowd of 10,525 with a 1-0 loss to the New York Red Bulls at Buck Shaw Stadium.

Joel Lindpere’s second half goal was the difference in the match, giving New York the advantage as both teams head to Red Bull Arena for the second leg of this home-and-home series Thursday night. The goal came in the 55th minute when Rafa Marquez’s pass into the danger zone was cleared by the San Jose defense only as far Lindpere 15 yards from goal, and the Estonian international rolled a shot inside the right post.

After a lackluster first half, San Jose came close to finding the equalizer in the game's closing moments. In the 83rd minute, a bouncing shot from Wondolowski was going wide and Eduardo acrobatically tried to redirect it on goal, only to have his shot hit the right post.

“I think a draw would’ve been a fair result, I don’t think we deserved to lose tonight,” San Jose coach Frank Yallop said. “The playoffs, it’s never easy. New York came in and played well, (while) we sputtered a little bit in front of goal.”

The starting line ups for both sides were missing some famous names. Thierry Henry didn’t make the trip for the Red Bulls, so 17-year-old Juan Agudelo got his first-ever MLS start, lining up alongside Juan Pablo Angel at forward. For the Earthquakes, Khari Stephenson began the game on the San Jose bench, replaced in midfield by Scott Sealy.

San Jose did not manage a shot on goal in the first half, their offensive output limited to a handful of shots from Geovanni: two from the right side that missed wide of the target, and a free kick in stoppage time that deflected wide left.

New York had several chances in the opening period, but couldn’t find the back of the San Jose net. Five minutes into the game, Mehdi Ballouchy should have buried Chris Albright’s cross from the right wing, but his point blank header was hit right at San Jose goalkeeper Jon Busch who made a quick reaction save.

Busch did well to punch away Joel Lindpere’s 15 yarder five minutes later. At the half hour mark, Juan Pablo Angel released Ballouchy down the inside left channel, but Ballouchy missed wide right trying to bend a right footed shot to the far post.

Just before halftime, a goal mouth scramble saw the ball fall to Lindpere for an open shot inside the six yard box, but Jason Hernandez was in the right place at the right time, clearing the shot off the line to keep the game scoreless.

Busch enjoyed another solid game in goal for San Jose, making another quality save to deny Rafa Marquez in the 51st minute, but he could do little to stop the New York goal that came soon afterwards.

Ten minutes into the second half, Brandon McDonald headed down a Rafa Marquez cross, but it fell to Joel Lindpere inside the box. “The header goes right to (Lindpere’s) feet, he takes a touch, and shoots through two of our players legs,” Yallop said. “It wasn’t a contrived goal, (it was) a bit of a knock down where they took advantage of our clearance. That’s football. I can’t take anything away from New York, they did their job.”

New York almost doubled their lead five minutes later when a Scott Sealy giveaway in the Earthquakes' defensive end sent Agudelo in on goal, but Busch was able to get down to stop the rookie’s shot.

San Jose made their first substitution just after the hour mark, with Eduardo replacing Scott Sealy, and soon had their first serious scoring attempt. A well-struck shot by Geovanni forced New York goalkeeper Bouna Coundoul to get down to make the save, his first of the night,  but he gave up a rebound that Chris Wondolowski raced to take advantage of. As Wondo stretched for the loose ball, he made contact with Condoul and hit the ground. The San Jose fans screamed for a penalty, but instead saw referee Paul Ward give Wondolowski a yellow card for diving.

Jon Busch was again soon tested by Mehdi Ballouchy, punching away a blast from inside the arc to keep the game close.

San Jose made a couple more changes as they pressed forward late, Arturo Alvarez coming in for Sam Cronin, and Khari Stephenson replacing Geovanni, but the Earthquakes could not unlock the New York defense. Eduardo’s acrobatics almost tied the game in the 83rd minute, and a stoppage time drive from Bobby Convey tested Coundoul, but San Jose will go into Thursday match with a 1-0 deficit against a club that enjoyed a 10-3-2 record at Red Bull Arena this season.

“We had the chances to score. We had a great spirit and great energy and a  great commitment to try and win the game,” Yallop said.

Thursday’s game will be televised on ESPN 2, ESPN 3, and ESPN Deportes. Looking ahead to the second leg of this playoff series, Yallop summed it up by saying, “We’re 1-0 down at half time.”