Brazilian striking duo aim to start together for the San Jose Earthquakes against D.C. United

Share All sharing options for: Brazilian striking duo aim to start together for the San Jose Earthquakes against D.C. United 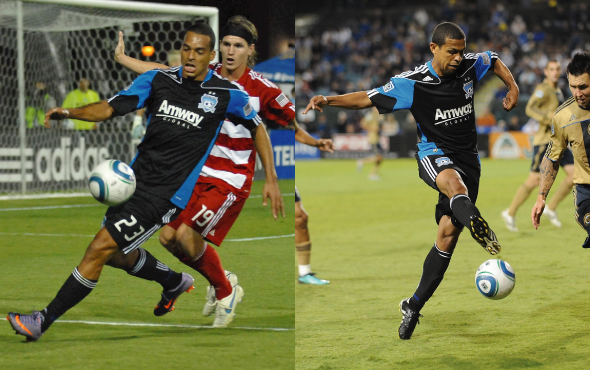 The San Jose Earthquakes Brazilian striking duo of Eduardo and Geovanni look to start together for the first time in 2010 this weekend against DC United. Photos: Joe Nuxoll, centerlinesoccer.com

Probably the most unusual roster decision ahead of last weekend’s game against the Columbus Crew was not that Geovanni was moved to the bench, but that oft-injured striker Eduardo was inserted into the starting line-up. The hulking Brazilian with the silky smooth touch has been getting more and more playing time over the last month, but always as a second half substitute. Saturday’s match at Crew Stadium marked his first MLS start of the season. For head coach Frank Yallop, he was very pleased with the striker’s effort on the night.

“I thought Eduardo did well against Columbus,” Yallop explained. “They didn’t give us a lot of chances, but we had a few. He may have tired a bit late in the game, but I still thought it was a good start for him. I thought he did fine, and was perhaps a bit unlucky not to have broken through.”

Eduardo was also pleased with his first start performance.

“First off, I am so happy to be playing,” said the forward through an interpreter, “but also glad that when I came off the field Saturday I felt completely fine. I wasn’t sore or injured after playing those 70 minutes.”

Meanwhile, seeing Geovanni on the bench was unusual, especially given that he is the Earthquakes designated player and has been asked to help lead his team to a playoff berth. However, the striker had his worst performance since joining the team in August in the midweek 3-0 loss to Chicago. Geovanni did make a late game appearance as a substitute for none other than Eduardo. For coach Yallop, it made sense to rest his star player for the team’s third match in eight days.

“He needed a break,” said Yallop, “and it made sense to bring others into the line-up in Columbus.”

This weekend in Washington D.C. the Earthquakes will be missing a trio of attacking players to international duty call-ups — Ryan Johnson, Arturo Alvarez, and Cornell Glen — leaving coach Yallop with a reduced roster to work with for the match against MLS cellar dwelling D.C. United. With that in mind, he started two players against the Crew that have not played too many competitive minutes in recent weeks in an effort to get them more match fit in Scott Sealy and Eduardo. Both forwards have been battling an assortment of ailments that stretch back into the spring, but with calendar now showing October, the two strikers are finally back to full health.

The signing of Eduardo as a free agent during the off-season was hailed as a major development for a club that was lacking a true scoring threat. With his former club in Switzerland, FC Basel, the 30-year old posted a scoring record of 17 goals in 96 matches, while helping to lead his team to a series of successful seasons in the Swiss Super League. While not always the featured striker with Basel, many believed that Eduardo could fill that role in San Jose and be the missing piece in the Earthquakes offensive puzzle.

The first five months of the season were forgettable for the Brazilian forward, as he fought to gain fitness upon his arrival to San Jose in the preseason, before dealing with a series of injuries throughout the spring and summer. As the calendar moved into fall, Eduardo had been limited to just 191 minutes in 5 appearances with no goals or assists. These were not the numbers that the coaching staff or Earthquakes supporters were expecting.

“I am really happy now to be able to support the team and contribute to the team,” said Eduardo. “When you are off the field not playing, you can’t really talk or say things about what you would do here or there on the field. By playing I really feel like I am now a part of the team and not just a bystander.”

The match this weekend against D.C. United presents an opportunity for Eduardo and Geovanni to make their first appearance together in the starting XI. Until now, the two forwards have only seen the field together for three matches and a total of 86 minutes. When they have been on the field together, the visible connections in their play they share transcend the common language that they both speak.

“In practice we are on the same team a lot together,” said Geovanni through an interpreter. “We understand each other very well. I understand him, he understands me.”

His fellow countryman echoed that sentiment.

“The major thing for us is that we share the same language,” said Eduardo. “We can talk to each other very well, and we understand each other. If I want to pass the ball we both know where to go, so it makes it easier to understand our movements on the field. We come from a background where there are some similarities to our styles; we understand just how the other wants to play.”

And while it is clear that the two forwards are hoping for the opportunity to spend more minutes on the field together, coach Yallop is not ready to commit to having both his Brazilian forwards in the starting line-up this Saturday against D.C. United.

“I expect Geo will make the start this weekend against DC United,” revealed Yallop, “but as to who he partners up with up top will have to wait. Both Eddy and Scott Sealy are feeling great and made it through the Columbus game, so they are both available for the weekend.

Both Eduardo and Sealy did well enough against the Crew that they should feel a start this weekend would be deserved. In fact, Geovanni was ready to lobby for his fellow countryman to get the nod from coach Yallop.

“I haven’t had a chance to play with Eduardo as a starter yet,” said Geovanni with a smile, “but hopefully that will come soon.”

Might we finally see the Brazilian duo together in the starting XI this weekend at D.C. United? The man to answer that question is coach Yallop, but he remained mum on the answer to that question.