Share All sharing options for: San Jose Earthquakes crash out of MLS Cup playoffs with 1-0 loss to the Colorado Rapids 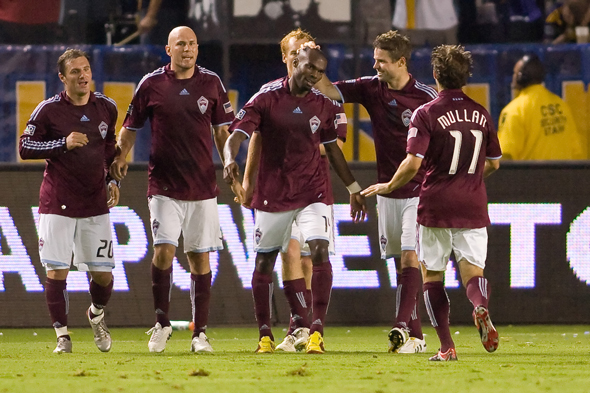 The Colorado Rapids were all smiles after defeating the San Jose Earthquakes 1-0 and earning a trip to the 2010 MLS Cup Final. Photo: Michael Janosz, isiphotos.com

The San Jose Earthquakes season came to a close after a 1-0 loss to the Colorado Rapids Saturday evening at a frigid Dick’s Sporting Goods Park. The lone goal came courtesy of a Kosuke Kimura crossing pass in the 42nd minute that eluded defender Jason Hernandez and goalkeeper Jon Busch. The victory by the Rapids earned them the Eastern Conference Championship and a visit next weekend to Toronto to contest the MLS Cup Final. The Quakes now begin their offseason knowing that a golden opportunity to make the Final was just a misfortunate play away.

The temperature on the field prior to kick-off was just below freezing, and both teams started the game with some tentativeness. With the Rapids and Quakes employing a similar tactical strategy of solid defense coupled with a speedy counterattacking offense, the match was destined to be a low scoring affair. For much of the first half, neither team really distinguished themselves, though San Jose did appear to have the upper hand in quality possession. Numerous corner kick opportunities went wanting, as the Quakes could not find the seams in a solid Rapids defensive formation.

With the match nearing halftime, the Rapids broke through in a most opportunistic way. For most of the half, the right side of the Colorado formation was making things difficult for the Quakes left winger Bobby Convey and left back Tim Ward. The chief culprit was Rapids defender Kimura, whose incessant work rate and overlapping runs prevented the Quakes from doing much damage on their own. Receiving the ball deep in the right corner in the 42nd minute, Kimura turned back toward his own half and created space away from the pursuing Quakes defense. He then whipped a crossing pass back into the penalty area that appeared destined for the outstretched boot of Rapids forward Omar Cummings. San Jose’s Hernandez was caught slightly behind the cross, and could only flail at the ball as it bounced near the six-yard box. Busch was caught guarding his line, where he anticipated a touch by the Rapids striker. Unable to react in time as the ball slipped under Cummings, Busch could only dive helplessly to his right while watching the cross slip inside the far post for a goal.

“To give up a goal like that is more fortunate for them and unfortunate for us more than anything,” explained Hernandez after the loss. “You see crosses go in for goals, but it was a dangerous ball in I couldn’t quite reach it, Omar couldn’t quite get to it and Buschy (Jon Busch) couldn’t get to it. It’s a sign of good things happening for a good team. They got a bounce that went their way.”

When the halftime whistle sounded, a still stunned Earthquakes team ventured back to their locker room to prepare for the second half of the game. Shoring up the defense on the left flank was priority number one, while finding a way through the Rapids solid central defensive pairing of Marvell Wynne and Drew Moor was action item number two. Accomplish both, plus create more shots on goal, and an equalizing goal would be a just reward.

The second stanza of the match saw the Quakes venture more into the Rapids end of the field, but disappointingly lead to a shutout for shots on goal. Too many possessions ended after long balls toward the Quakes forwards were cleared to safety by the Rapids sturdy defense. The work effort from Ryan Johnson and Geovanni which was so effective in the previous match against the New York Red Bulls suffered under tight marking from Colorado. Forced to press forward, San Jose found themselves vulnerable to the counterattack, and were fortunate not to go down a second goal through the goalkeeping exploits of Busch.

As head coach Frank Yallop swapped defenders for offensively minded players, the match became one long series of Quakes pressure and Rapids defensive resiliency. Second half substitute Arturo Alvarez was least afraid to shoot the ball, but his only efforts were well clear of the target. Chris Wondolowski nearly tied the score on a well taken header, only to see the ball slide agonizingly past the right post after beating goalkeeper Matt Pickens. Brandon McDonald had the last best chance to equalize when he created enough space in the area to meet a probing cross, but his header flash wide of goal.

As the final minutes ticked down on San Jose’s season, the team resorted to sending in numerous long balls toward Eduardo and Ryan Johnson in an effort to move possession into the Rapids area. Colorado applied pressure on every inbound ball and never once was truly threatened by the Quakes impatient attempts to find a shot on goal. When the Rapids did gain possession, they did an expert job of utilizing time wasting tactics in the Quakes corners, forcing San Jose to act more impatiently when regaining the ball. The Earthquakes never seriously threatened Pickens’ goal in the last ten minutes of the match, and could only hang their heads in disappointment at the sound of the final whistle.

With full time complete, the Rapids carried a 1-0 victory to the Eastern Conference Championship and a date with either the Los Angeles Galaxy or FC Dallas in Toronto next weekend for the right to hoist the MLS Cup. The formidable striking duo of Cummings and Conor Casey were kept at bay on the night by a determined Quakes defense, but it was the unlikely hero in Kimura that made the difference on the night. For the speedy defender, it was his first goal of 2010, and it could not have come at a better time for the Rapids.

And so the Earthquakes left the field facing a trip back to San Jose knowing that they had come ever so close to reaching the MLS Cup Final. The team will now have an offseason to rue their lack of luck in Colorado, knowing they didn’t do enough to overcome Kimura’s fortunate goal. The effort and desire were clearly evident, but the quality possession in the attacking third and the potential resultant scoring opportunities were lacking. On a whole the 2010 season should be considered a success despite the cruel manner in which it ended. With time, the bitterness of losing to Colorado will fade, and the realization of a season well played will be always remembered.