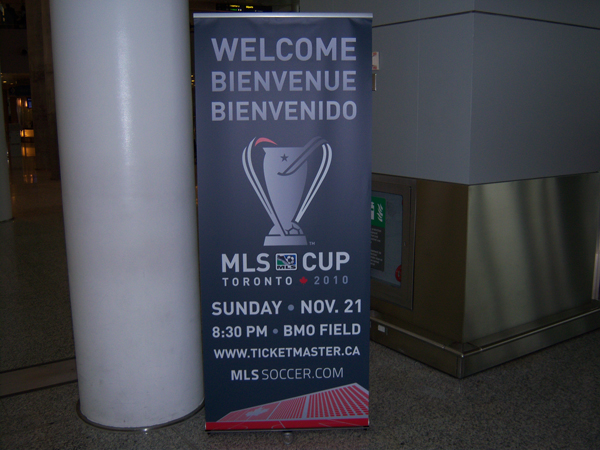 Sure, the MLS poster at the Toronto airport was nice, but where was Commissioner Don Garber to welcome me to MLS Cup weekend?

After enjoying a three-leg cross country tour courtesy of the fine folk at United Airlines, I have arrived in Toronto ready for MLS Cup weekend. While the trip would have been much more exciting if the Earthquakes were involved, I still expect an entertaining match between two of the league’s original teams. My only complaint so far — I left an 80 degree sun-bathed Bay Area for a rainy, near-freezing temperature Canada. Good thing MLS has supplied us with branded mittens and stocking caps.

The hospitality of those I’ve run across so far today has been fantastic. Mention you are here for the MLS Cup and locals have unanimously thanked me for making the trip. Even with their beloved Maple Leafs playing host to the New Jersey Devils tonight, Torontonians are geared up for a sport they refer to as football up here. I wore an Earthquakes t-shirt on the flight in — no bias there — and had some conversations with MLS supporters sharing their condolences with me. TFC fans sure can bend your ear about heartbreak.

First up on the media agenda today is the arrival of the Rapids and FC Dallas teams to Toronto. Colorado head coach Gary Smith is set to face the media scrum, where I am sure he will have plenty to say in that lovely Londoner accent. Later this evening, Schellas Hyndman gets his chance to mix words with the media — the biggest point of discussion I’ve heard so far, will he wear the now famous butter-leather jacket Sunday night. Given the projected sub-freezing temperatures expected at game time, Hyndman and the rest of us will certainly need to layer up. Hey Schellas, I can hook you up with some sweet MLS mittens.

Tomorrow begins the shortened preparations of the teams ahead of the Cup final, with their first scheduled training sessions at BMO Field. No more an artificial turf field, BMO has a state-of-the-art heated grass pitch that will no doubt be ready for whatever Mother Nature throws at it Sunday night. The match day conditions will seem very familiar to the Rapids — they played under the same conditions in their besting of the Quakes last Saturday. For FC Dallas, on the other hand, it will be interesting to see how they prepare and adjust to the winter-like forecast.

As for me, I’m off next to find an official MLS Cup Final scarf. I can’t have my neck exposed and freezing and risk the chance at whiplash watching David Ferreira or Pablo Mastroeni blasting a ball into the net. Yes, the scarf should prove to be the fashion accoutrement of the weekend, and as ever-present as those vuvuzelas were in South Africa for the World Cup. At least the scarves serve a purpose…