Share All sharing options for: Colorado Rapids and FC Dallas make their arrival in Toronto ahead of 2010 MLS Cup Final 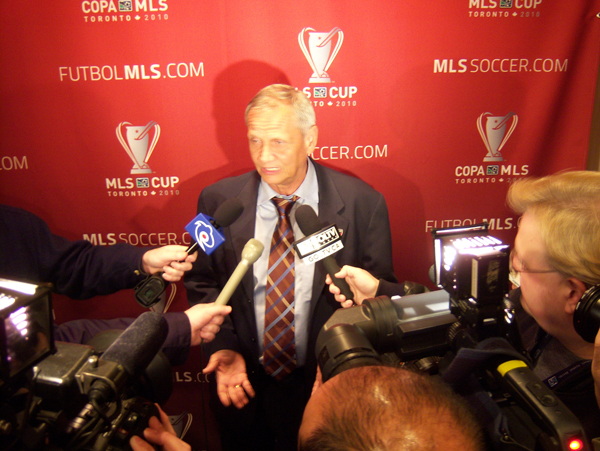 With both the Colorado Rapids and FC Dallas teams arriving in Toronto on Thursday evening, coaches and players made their first appearances for the media at their respective hotels. Rather hastily thrown together, the two pressers were executed the old fashioned way, with the reporters with the longest arms getting their microphones closest to the desired coach or player. Fortunately, a surprisingly intimate collection of media actually ventured out for these two media sessions, and no one was hurt in the resultant scrums.

First off was the arrival of the Rapids at their swanky digs right on the lakeshore. The hotel was adorned with all sorts of MLS Cup paraphernalia, so their location was certainly not a secret. However, an Avon Lady convention was also going on in the hotel, so the team did make their way inside with relative anonymity through the service entrance. Head coach Gary Smith was first to talk with reporters, braving both the TV cameras and the assembled writers in a cramped downstairs meeting room. He seemed to be sweating a bit as the questions wore on, but I chalk that up more to their being no air conditioning in the room — I was starting to feel a bit ripe myself!

Next up was an ex-San Jose Earthquakes favorite, Brian Mullan. The soft spoken midfielder seemed somewhat bemused by the whole scene, but soldiered on with the interview. Being a veteran of so many MLS Cup final matches, this was old-hat for the tough-as-nails Mullan. 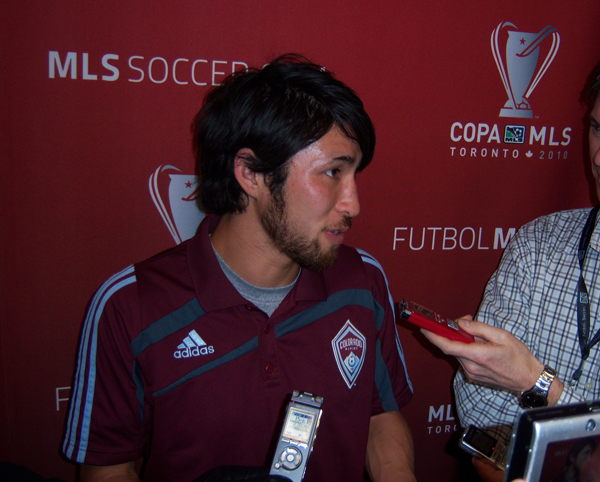 I missed speaking with Marvell Wynne, so I’ll try to catch him after training tomorrow, but I did participate in a very lengthy discussion with Quakes-killer Kosuke Kimura. The Japanese-born defender was refreshingly open with his answers, and the talk evolved more into a look into his time before his MLS debut. Kimura even delivered some fighting talk in Japanese — I wonder if anyone over at FC Dallas can translate that for the bulletin board?

With the Rapids presser complete, I walked over to the FC Dallas hotel to await their arrival. Joining me on the one-mile stroll were Luke Cyphers of ESPN: The Magazine and both Adam Serrano and Avi Creditor of SBI. The conversation was dominated by talk of the USA triumph over South Africa the day before, even as we made our way through the throngs of Maple Leafs fans making their way to their game with the New Jersey Devils. Yes, Canada will always be a hockey-first country.

FC Dallas, hopefully not starting a pattern that will extend into Sunday’s championship match, were late to arrive at their downtown hotel. No worries, as me and the other 20 or so media guys relaxed in the conference room and talked MLS. We shared the latest rumors of who might be coming to and going from the league in the offseason — a big name transfer seems to be in he works folks, but I promised not to divulge that information just yet — and vented a bit about the game being played in the frozen north. Someone suggested that in order to change that, MLS needs to reinstate a team in Florida, and we were all in agreement. The other fun topic of conversation was our collective plan to institute a throwback jersey weekend on the MLS schedule. Who wouldn’t want to see the Quakes drag out those rather colorful shirts from the 1996 season, or — better yet — the NASL? 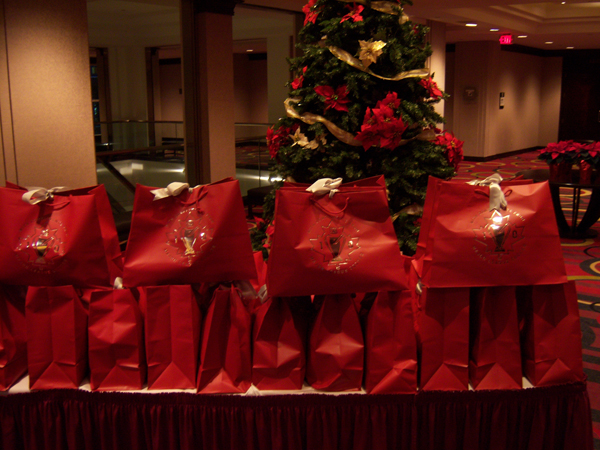 Taking a break from the festivities, I wandered around the hotel and spotted the fantastic display of gift bags that were ready for the players and coaches. Set next to one of the many decorated trees in the lobby, it looked like Christmas had arrived early for the Hoops. I didn’t get a chance to peak inside the bags, but I imagine they are filled with goodies that must rival what is handed out to Oscar goers: Rolex watches, the latest mp3 players, fancy cufflinks, bottles of the finest champagne — the list must go on and on. Maybe not knowing what was inside those shiny red bags is better for my imagination. I suspect there was nothing more than a couple bottles of Sierra Mist, a Makita power tool, some Castrol motor oil, and a can of Glidden paint.

With the conversations petering out, and the collective mass growing restless, the FC Dallas team bus finally arrived at the hotel. While most of the players grabbed their goody bag and headed upstairs after their long travel day, a few brave souls made their way across the lobby to talk to the media. First up were Dario Sala, Zach Loyd, and Dax McCarty. I decided to join the conversation with McCarty, as he was a symbol of the struggles Dallas has undergone in growing as a team over these past three seasons.

When the other two players hustled out of there without my getting to speak with them, I made my way over to the growing scrum that was circling head coach Schellas Hyndman just inside the conference room doors. And then, like toothless sharks, we lobbed softball questions at the butter leather jacket-less coach. Okay, that was a bit harsh — this being the opening presser, the questions were much more general. Plus, given that Dallas must be considered the favorite in the Cup final, Hyndman was not going to say anything inflammatory that might fire up the Rapids. The interview was still very interesting at times, especially when Hyndman shared the story of how he came to know about midfielder David Ferreira and also about his transition from college coach to the professional gaffer ranks.

Stay tuned for more from Toronto!