Share All sharing options for: FC Dallas gets their first look at BMO Field ahead of the MLS Cup Final 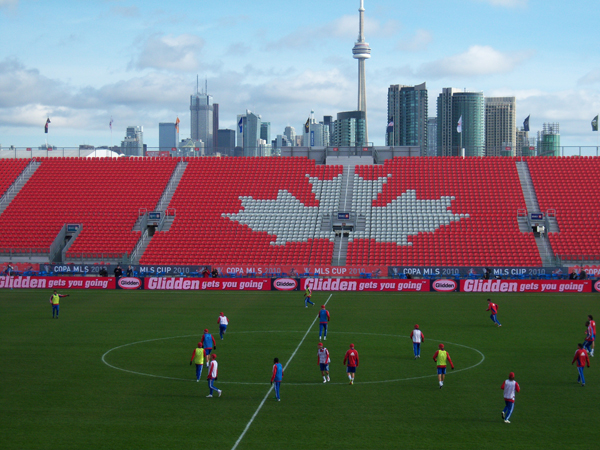 FC Dallas trains at BMO Field ahead of the MLS Cup Final. The scenic skyline of Toronto rises in the background above the stadium. Photo: Robert Jonas, centerlinesoccer.com

With a gentle breeze blowing in off the lake, FC Dallas took to BMO Field for their first training session in Toronto ahead of the MLS Cup Final. Head coach Schellas Hyndman had his charges playing a spirited 11 v. 11 scrimmage for much of the morning that gave the players a chance to get a good feel for the pitch. The same starting XI from their previous match against Los Angeles spent time working together, suggesting Hyndman will not make any changes to the line-up that earned the franchise its first ever trip to the MLS Cup Final.

Following the session, the players navigated their way through the mixed-media zone on their way to the locker room refuge. Surprise starting forward Atiba Harris shared his thoughts ahead of the match against the Colorado Rapids. He certainly hopes his coach doesn’t mix things up ahead of Sunday’s Final and he gets a chance at the start. Harris was all smiles during his interview, clearly comfortable with the opportunity to play for the MLS Cup. 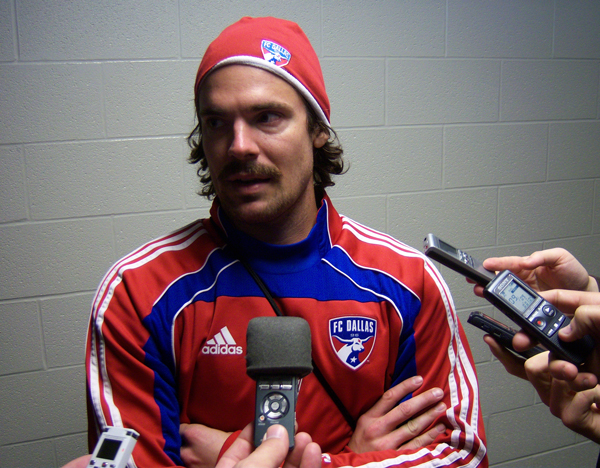 Next up to the media questioning firing line was defender Heath Pearce. Resplendent with his playoff mustache, Pearce assured the assemblage that he was fully recovered from injury and looking forward to getting clearance to play Sunday. While not privy to coach Hyndman’s plans, Pearce declared that he would be ready for whatever the coach has in store for him. 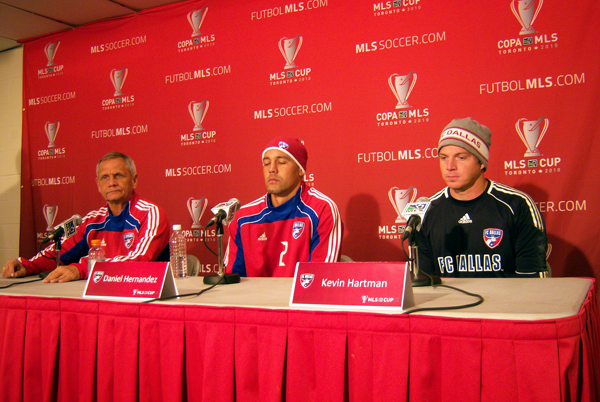 With the last of the players retreated behind closed locker room doors, attention turned to the official FC Dallas press conference. Alongside coach Hyndman on the dais were team captain Daniel Hernandez and goalkeeper Kevin Hartman. While clearly thrilled to be in the MLS Cup Final, the coach and players were not ready to declare themselves the overwhelming favorite. Given that both meetings between the teams in the regular season ended in draws, they were not taking their higher seeding status for granted.

A big topic surrounding the match is the late starting time (8:30 p.m. EST) and the possibility of near freezing temperature conditions. Hyndman and the players tried to shrug it off, but it does seem that the Colorado Rapids may have some advantage when it comes to their experience playing in cold weather. Yet, as Earthquakes fans know from their victory over the Red Bulls earlier in these 2010 playoffs, the ball is round and the match goes 90 minutes — anything can happen.