Share All sharing options for: Colorado Rapids welcome the cold weather in Toronto ahead of the 2010 MLS Cup Final

The hallways of BMO Field were adorned with all sorts of MLS Cup Final signage. Photo: Robert Jonas, centerlinesoccer.com

As the midday sun cast inclination shadows over BMO Field, the Colorado Rapids took to the pitch for their first training session of MLS Cup weekend. Head coach Gary Smith and his coaching staff watched from the sideline as the team went through practice behind doors closed to the media. As such, we were left to speculate at what Smith might have planned for his starting line-up on Sunday evening.

Looking no worse for wear, and completely unaffected by the cold temperatures, the Rapids players filed back into the stadium bowels following training. The projected match time weather for the Final is for chilly temperatures and light rainfall — not too far removed from that the Rapids get in Denver this time of year. Some of the players commented that they would take the supposed advantage the weather may provide, but were quick to point out that as underdogs they will need play at the highest level regardless. One difference I noticed from the media session was that the Rapids seemed much more intense than I saw with FC Dallas. And, that seriousness from the players was balanced out by the more humorous sound bites coming from coach Smith. 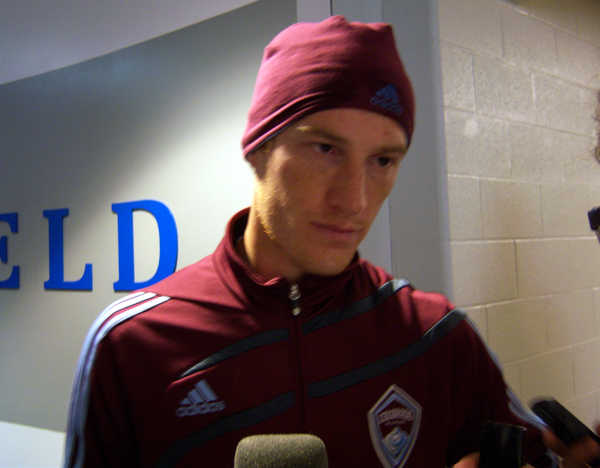 Midfielder Jeff Larentowicz was first to stop for the press of media, and he candidly shared his thoughts ahead of the Final. Thrown in were some funny asides on his being red-headed, but Larentowicz seemed much more focused on the opportunity the Final presents for the ex-New Englander. Having lost in the MLS Cup championship three times with the Revolution, the Rapids offseason acquisition stated how motivated he is to finally be a part of the winning side. 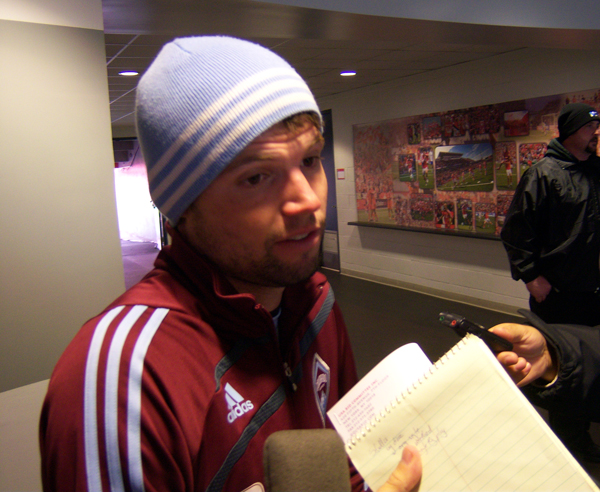 The next to be interviewed was defender Drew Moor. The former FC Dallas man was traded to Colorado during the 2009 season, and stated his desire to show his old team that they a mistake in letting him go to the Rocky Mountain state. Still, Moor did praise his old coach, Schellas Hyndman, for his guidance and teaching at Dallas. While he acknowledged that his new coach has also been invaluable, he admitted that Hyndman has been a good influence on him as a player.

Finally, a few words with Marvell Wynne to complete the mixed media zone session. The former Toronto FC star was happy to be back in his old digs, but very much looking forward to playing in his first MLS Cup Final. 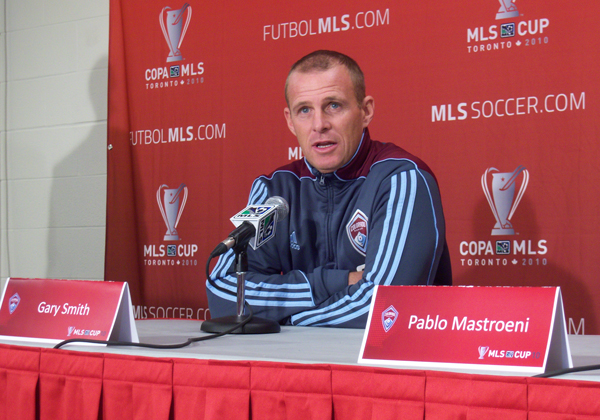 The official Colorado Rapids press conference was next on the agenda. Coach Smith was joined by MLS veteran Pablo Mastroeni and forward Omar Cummings. Smith clearly was trying to take some of the pressure off his players by fielding most of the questions — not a bad strategy to keep his players free of distraction. Cummings was surprisingly quiet, but that seemed to suit him just fine. Mastroeni, a 12-year veteran of the league and the longest tenured Rapid by 5 years (he joined the team in 2002) was especially candid in letting loose his desire to see his team win their first championship of any kind. He’ll have two more days to prepare himself and motivate his teammates, but if there ever was a player suited to the task, it would be Pablo.