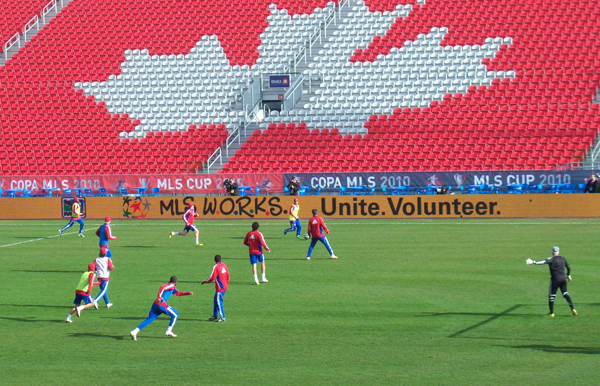 The day of the 2010 MLS Cup championship has finally arrived, and all eyes will be on BMO Field tonight starting at 5:30 p.m. on the west coast for a battle between two MLS originals — the Colorado Rapids and FC Dallas. Neither team has won a championship since the league’s inception in 1996, with the Rapids losing in the 1997 Final and Dallas never making it this far. And while the Hoops will be considered the favorites due to their better regular season finish, history has shown that seedings mean very little in the MLS playoffs.

Both teams went through their final training preparations on Saturday at BMO Field, and looked quite comfortable in doing so. The weather has been crisp, but the predicted precipitation has failed to materialize. As was the case on Friday, players and coaches entertained the assembled media during post practice mixed media zones. To catch everyone up on the goings on around BMO Field this weekend, the last of the interviews are included below.

A special interview session was held with FC Dallas owner Clark Hunt on Saturday as well. The Hunt family was instrumental in financially supporting MLS for many years of multi-million dollars revenue losses. Another Hunt owned team, the Columbus Crew won the MLS title back in 2008 — Dallas has a great chance to do so as well. Hunt talked about the challenges of competing in the greater Dallas area for the attention of sports fans spoiled by a diversity of options. While not specifically detailing the attendance woes the team has at home, he did refer to the Dallas mentality of loving a winner. In a now famous open letter to the local media, Hunt pleaded for more reporting on the goings on in Frisco, but conceded that winning may be the only remedy for that lack of respect.

First up for the players was FC Dallas captain Daniel Hernandez. While part of the press conference the day before, the less formal setting of the mixed media zone allowed for a more detailed conversation. Hernandez reiterated how happy he is to be playing in Dallas under head coach Schellas Hyndman — his former college coach at SMU. He was quite serious through the questioning, showing a focus on the championship, as well as sharing some compliments for his MVP teammate David Ferreira.

Goalkeeper Kevin Hartman was also interviewed post-practice. He may have already won an MLS championship previously in his career, but he hopes to bring a title to Dallas this season — especially as a reward to the franchise for taking a chance on the out-of-contract ‘keeper prior to this season. And to imagine, Hartman was all but done with his career in the last offseason after Kansas City failed to sign him to a new contract. While the Los Angeles Galaxy would have liked to see him retired, the fans in Dallas must thank their lucky stars management took a chance on the free agent.

While the Dallas players made the rounds with the media, the Colorado Rapids arrived at the stadium for the start of their training session. There were some handshakes, some comments, some simple acknowledgment of their opponents — but no trash-talking or incivility. I guess that will be left for the supporters groups on Sunday evening. 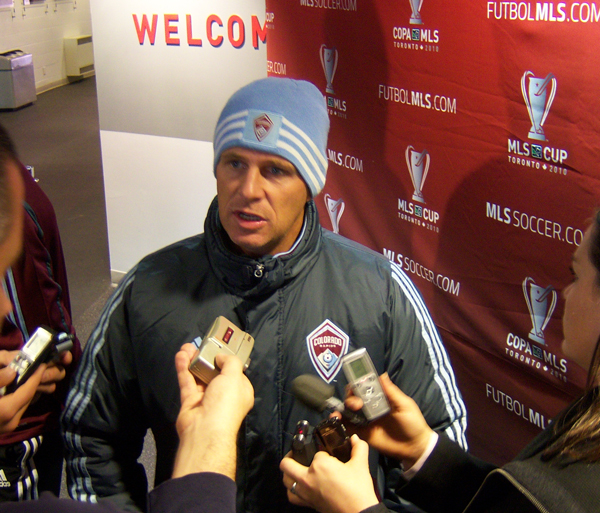 The always quoteable coach Gary Smith spoke with the media at the conclusion of the Colorado Rapids final training session ahead of the 2010 MLS Cup Final. Photo: Robert Jonas, centerlinesoccer.com

The Rapids closed practice to the media again, so there is little new to report on regarding tactics and line-ups. Instead, expect a similar starting XI to what head coach Gary Smith has used throughout the postseason. He remained coy in interviews following practice, so we’ll all have to wait until the hour before kick-off to see if there any surprises. In a long, but entertaining interview, Smith also lamented the 3-2 loss by Arsenal to rivals Spurs in the North London derby earlier in the day. The coach also spends a fair amount of time talking about his connections to parent club Arsenal, and how he came to be the Rapids gaffer.