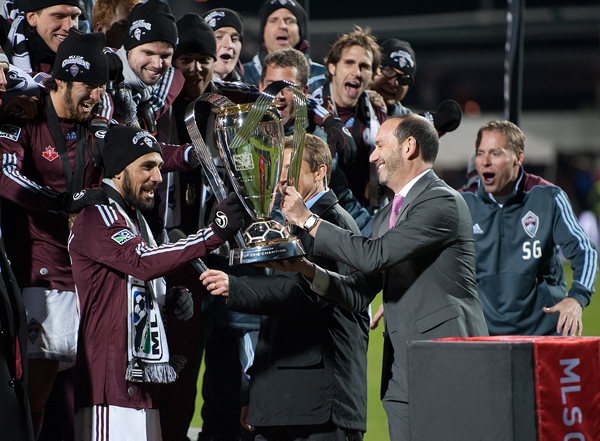 The Colorado Rapids are crowned the 2010 MLS champions and are presented the Philip F. Anschutz Cup trophy after their 2-1 extra time victory over FC Dallas at BMO Field in Toronto. Photo: Nick Turchiaro, isiphotos.com

The Colorado Rapids completed their fairytale run to the Major League Soccer championship with a hard-fought and physical 2-1 victory over FC Dallas at BMO Field in Toronto. It took extra time, but the 2010 MLS Cup Final winner was decided on the field and not via lottery, er, penalty kick shootout as the year prior. With the score tied at one apiece to start the bonus soccer period, an unfortunate deflection off the back of FC Dallas defender George John from a Macoumba Kandji shot in the 107th minute fortuitously found the frame and resulted in an own-goal to the Rapids. FC Dallas left it late to press for an equalizer — and shot at goal an amazing eight times in the last 10 minutes — but could not break through a resilient Rapids defense.

Rapids forward Conor Casey was named MVP of the match and tallied the first goal for Colorado early in the second half. Following a cross into the area from the left wing, Casey disrupted an attempt to collect the ball by goalkeeper Kevin Hartman, and cleverly poked the loose ball into the open net whilst sitting squarely on his backside. Purely a hustle play by the hulking striker, Casey’s goal rewarded a Rapids side that was methodically wearing away an FC Dallas team that seemed ill-prepared to handle the excessively physical nature of the match.

FC Dallas were the first to score, off a beautiful sequence during the 35th minute. A pass into space from defender Jair Benitiez along the right touchline to midfielder Marvin Chavez allowed the Honduran International to serve a well weighted in-swerving cross toward the near post that was expertly met by MLS MVP David Ferreira for the game’s opening goal. The score was well deserved for Dallas, which had done well to control possession over most of the opening 30 minutes. For Ferreira, the quality of the finish was on par with his other highlights from a memorable 2010 season.

The tone of the match was established early on by the more physical play of the Colorado Rapids. And while coaches and players from both teams cited the lack of a quality pitch this time of year at BMO field, FC Dallas were more hampered trying to establish their possession tactics by the relentless pressure of the Rapids. Key players down the spine of head coach Gary Smith’s formation — Casey up top, Pablo Mastroeni and Jeff Larentowicz in the midfield, and Drew Moor and Anthony Wallace in defense — left little time and space for the otherwise passing oriented offense orchestrated by Ferreira to gain traction through the central third of the field. Instead, a steady dose of heavy challenges by the Rapids formation core wore away at the effectiveness of Ferreira and midfield partners Daniel Hernandez and Dax McCarty. Sixteen fouls committed and three yellow cards issued spoke volumes on the strategy that Smith’s team went about employing on the night.

The most effective player on the field for the MLS champions was Larentowicz. The former New England Revolution midfielder expertly worked in tandem with central partner Mastroeni to continually frustrate the Dallas attacking players. Larentowicz was key in forcing Dallas to try other ways of reaching the Rapids penalty area, in effective almost neutralizing the open-field runs that Dallas uses to create scoring opportunities. Add in the five called fouls on Casey, plus the countless borderline calls that went his favor, and Dallas rarely enjoyed an easy path up the field. An argument could be made that either Larentowicz or Casey were deserving of the Cup Final MVP award, but overall both players were happy to earn the most important award — MLS Cup champion.

After finishing the regulation time period with the score knotted at one apiece, the teams lined up to play two 15 minute extra time periods in search of the decisive goal. Quick aside, surprisingly the second half ended with FC Dallas preparing to take a corner kick. Unfortunately for the Hoops, they were denied a scoring opportunity in the waning seconds of stoppage time. This very unusual decision was sounded derided by the Dallas contingency of fans at BMO Field, and a relative oddity in the world of soccer. A thus far tepid match continued that way into the first extra time period, when neither team could muster a shot on goal.

As the second extra time stanza began, Rapids substitutes Julien Baudet and Kandji made their impression on the match. Baudet was a bloodhound on the track of capturing dangerous crosses served into the Colorado defensive third. Whether on the ground or in the air, Baudet frustrated the more increasingly attacking Dallas players efforts to break the stalemate. Kandji then provided the moment that will go down in lore for the Colorado organization. His cutting dribble on the right wing just outside the penalty area, allowed him to round Benitez and make a run right at the goal. Kandji fired a shot into the six-yard box that looked to be anticipated by Hartman for the easy catch save, but was deflected by John to the upper near right corner where no one with Dallas was going to be able to stop it. On the play, Kandji was seriously hurt and left the field, leaving the Rapids a man short because they had no substitutes left to make.

FC Dallas, now trailing by a goal with less than 15 minutes remaining in the match, were slow to mount any sort of comeback until just before the announcement of 3 minutes of added time. In that short span, the Hoops shot five times toward goal, and were stopped by solid defense from goalkeeper Matt Pickens, Larentowicz, and Moor. Especially Moor, a former Dallas player that has made no secret to his discontent with being traded during the 2009 season, was important as he cleared a potential goal away from an empty net. Pickens made the save of the match in the 121st minute, going low to guide a low shot around the left post for a corner kick. The shaggy bearded ‘keeper bounded up from the ground and rallied the Rapids defensive core to accept the challenge of making it near impossible for their opponents to threaten their goal the rest of the game. Dallas did come close on a couple of occasions, but soon collapsed to their knees at the sound of the final whistle.

The Colorado Rapids, first time champions of MLS, ran toward the corner of the field watched over by the Rapids traveling supporters in the North stands. They rejoined at the center circle for the awarding of the Cup trophy and a shower of colorful confetti. Dallas players and coaches could only look on with blank stares, their minds filled with questions of “what went wrong” — an especially a pained John, who was credited with the own-goal that gave the title to Colorado. Especially fitting for the new MLS champions, nine-year Rapids veteran Mastroeni was asked to lift the Cup aloft on the stage at midfield. He thrust the gold and silver chalice high into the crisp Toronto air, touching off team celebrations that carried well into the night. It may have taken 15 seasons, but the Colorado Rapids finally achieved the status of MLS Cup winners.