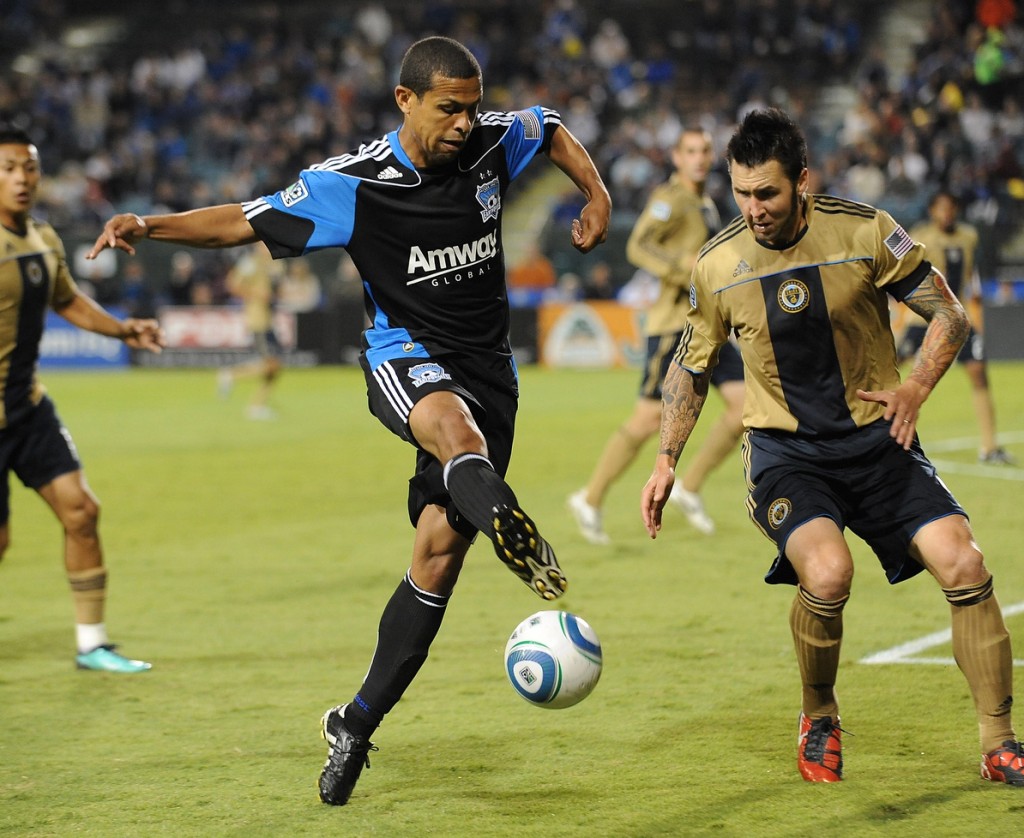 Geovanni has played his last match for the San Jose Earthquakes it was revealed today. The Quakes also declined contract options on forwards Eduardo and Cornell Glen, while losing Joe Cannon and Arturo Alvarez to the Expansion Draft. Photo: Joe Nuxoll, centerlinesoccer.com

The San Jose Earthquakes made news on two fronts today with regard to their player roster entering the offseason. First was the selection of goalkeeper Joe Cannon by the Vancouver Whitecaps and midfielder Arturo Alvarez by the Portland Timbers in the MLS Expansion Draft. Second was the acknowledgment that three players have not had their contract options picked up for 2011 — forwards Eduardo and Cornell Glen, and midfielder Geovanni. While the first two were expected, the departure of the Earthquakes designated player comes as somewhat of a surprise.

Entering the Expansion Draft, the Quakes could only protect 11 players — 3 of which needed to be international players — from selection by Portland and Vancouver. Cannon was selected by the Whitecaps in the eighth round, which then allowed the Quakes to move defender Tim Ward to the protected list with just two rounds remaining. Earthquakes General Manager John Doyle was not surprised to see the veteran 'keeper selected in the draft especially given his MLS pedigree.

"Joe Cannon's always been a starter in our league," explained Doyle, "and he'll definitely look to do that with Vancouver."

Three picks after the Cannon selection by Vancouver, with Portland’s last pick of the draft, the Timbers selected Alvarez. The El Salvadoran international was subsequently moved by Portland to Real Salt Lake for a second round draft pick in the 2011 MLS draft. For the Earthquakes, the situation with Alvarez was similar to Cannon -- a starter quality player that was not a regular listing in the starting XI but commanding a relatively high salary by MLS standards.

"Alvarez didn't see his role with our team being someone coming off the bench," Doyle elaborated. "He has expressed to me that he wants to be with a team where he can be a starter. Still, he was a tough player to lose, and we'll move forward and look for another midfielder/winger who can provide cover for our starters."

While both players will be missed by the Earthquakes, the silver lining is the salary commitment of nearly $400K annually that will be saved by the club. Given that both players were often left out of the starting XI, the freed money will now give Doyle more flexibility in working with current players on their contracts as well as in rounding out the remaining roster spots for 2011 with less costly alternatives.

The other revelation of the day was the Earthquakes parting ways with their first designated player in Brazilian Geovanni. The midfielder/forward joined the team late in the season, and provided a good option for Head Coach Frank Yallop in designing his attacking formation. However, the ex-Hull City player was not as effective as his salary demanded, and Doyle felt it most prudent to let the 30-year old go. With his statistics limited to 1 goal and 3 assists in 12 regular season and 3 playoff matches, the decision was made to look at other options to bolster the Earthquakes offensive during the off-season.

"Geovanni was a good boost for us when he first joined the team," said Doyle, "and we were just hoping that he'd have more of an impact game to game, but that wasn't the case."

The Brazilian playmaker did bring some needed energy to the Earthquakes offense in those first few appearances, but his regular season peaked in just his third game with his one goal, one assist Man-of-the-Match performance to help the Quakes beat the Dynamo 2-1 in Houston. In 12 total appearances after that September 5th road contest, Geovanni contributed no goals and two assists. When the season concluded with the playoff loss to Colorado in the Eastern Conference Final, Doyle started the process of planning the Earthquakes roster for 2011. The thought of bringing Geovanni back was far from positive.

"Geovanni came to us to talk about next year," revealed Doyle, "and he wanted a guaranteed 3 years at a very high salary figure. He was a good player for us at his 2010 salary. We just weren't willing to do such a long term deal for what we saw him bring to our team this season."

The other two players not offered contracts for 2011 were Eduardo and Cornell Glen. For both, their seasons were statistically disappointing and they both fought injuries more often than not. Given that both were holding International Slots on the Quakes roster, Doyle now has even more flexibility in securing new attacking threats for the 2011 season.

Looking forward to the team's roster priorities in the off-season, look no further than at the positions where the Quakes player depth was weakened with today's moves.

"We need to get a solid, young back-up goalkeeper either through the draft or other avenues that Jon Busch can mentor during the coming seasons, "outlined Doyle. "We also need to get another forward to add depth to our front line and a wide player to do the same for our midfield."

The Earthquakes will have a chance to potentially pick up those types of players in the inaugural MLS Re-Entry draft to be played out in December. After that comes the MLS Superdraft in January for college players and others new to the league. Of course, with free agency and the FIFA winter transfer window, there exists many other avenues to bring in players. When San Jose starts their preseason training in late January, we'll know most of the answers as to how the 2011 roster will shape up for the Earthquakes.