Earthquakes hold off Wizards for 1-0 victory

Share All sharing options for: Earthquakes hold off Wizards for 1-0 victory

Playing for the second time in four days, the San Jose Earthquakes defeated the Kansas City Wizards 1-0 in a preseason match Saturday afternoon at the Arizona State University Soccer Stadium. Newly signed forward Eduardo flicked in a header in just the 3rd minute of the match following a corner kick from Andre Luiz. The Earthquakes held on over the three 45-minute sessions to take their preseason record to 2 wins and 1 loss.

Under sunny skies with no wind, the match started in the Earthquakes favor, as the team looked to erase the memories of Wednesday's 3-0 loss to the Wizards. Joining the spectators for the match was owner Lew Wolff, who watched the game intently from the stands as he exchanged thoughts with General Manager John Doyle. He must have liked what he saw of the Quakes, as their intensity of play made it clear that the team was looking to leave Arizona with a victory.

Looking much more energetic from the opening whistle, the Quakes midfield line-up of Anrde Luiz and Brad Ring in the middle with Arturo Alvarez and Joey Gjertsen on the wings set the tempo early as they pressured the Wizards at every opportunity. Pressing on into the attacking third, the Quakes earned the early corner kick that lead to the only score of the game. Using his size to create space, Eduardo rose to meet the crossing pass from Andre Luiz, and glanced a header to the back post for the goal.

With the restart, the Quakes continued to assert themselves with the ball. Forward Cornell Glen nearly doubled the lead with a well timed volley, but the KC ‘keeper made a very nice save. Gjertsen was next to test the Wizards defense, as he received a crossing pass from Alvarez that he lifted over the crossbar. Gjertsen knew he missed a golden opportunity to score; he definitely should have done better with the shot, and he might have considered heading it in instead. Alvarez was next to get a shot on goal, as he dribbled through the defense before unleashing a shot off the far post. The first 45 minutes ended soon after, with the Quakes looking very sharp on offense, but ruing the lack of finishing touches.

Quakes scramble to convert after a free kick

The second period followed the script of the first, as again the Quakes dictated the run of play. Midfielder Brad Ring looked very comfortable in leading the charge for San Jose, as well as tracking back on defense to win the ball on some tough challenges. Where Andre Luiz looked to play the holding midfielder role, Ring took more chances up the field where he was able to distribute the ball effectively to the wings and forwards. While still fighting for a roster spot of the 2010 Earthquakes team, Ring did nothing to lessen that possibility with his performance on the day.

Halfway through the second period, the Earthquakes completed a wholesale line-up change, bringing in a new eleven. Quincy Amarikwa and Chris Wondolowski took their places up front, while Ramon Sanchez and Simon Elliott manned the center of the midfield. Despite all the changes for San Jose, they continued to look the better team as the second 45 minutes went on. Amarikwa would have made the score 2-nil if not for an excellent save from the Wizards goalkeeper. Soon after, he did appear to score, but the goal was waved off for offside. Fewer scoring opportunities from both sides described the remainder of the second period, and as time elapsed, the Quakes still held on to their one goal lead. 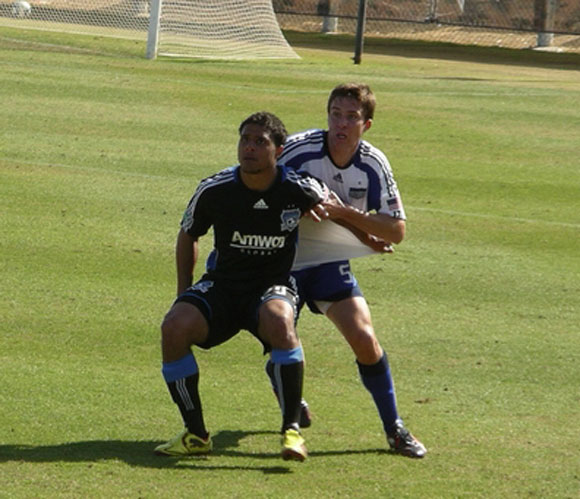 The last 45 minutes were played much like the middle third. Amarikwa looked good on a couple offensive pieces, but still couldn't find the shot that would double the Quakes lead. Rookie midfielder Steve Beitashour showed great pace on the wings, and nearly found the back of the net with a wonderful strike from inside the area. In the defensive third, there was little for the Quakes to do, other than control possession and feed the midfielders. It is still early in the preseason, so the players can be somewhat excused for lacking the perfect touch on their passes. Too many times, good passing sequences were derailed by a lack of understanding between the players. This held true for Kansas City as well, contributing to both teams showing little in the way of sustained offensive pressure late in the match.

The game concluded as the referee blew his whistle at the end of the third 45 minute session, and the Earthquakes early goal held on for the 3-1 victory. The team leaves Arizona later in the day to return to the Bay Area for two more weeks of training. Check back at Center Line Soccer for all the latest news as the Quakes prepare for the 2010 season.

(Special thanks to Peter Cutler for his contributions to this report. His work can be found at Major League Soccer Talk and on his personal blog The Overlapping Run.)