Quakes preseason rolls on at WVC

Share All sharing options for: Quakes preseason rolls on at WVC

While they wait for construction to be completed on their new training facility in San Jose later this spring, the Earthquakes continue to hold practice sessions in alternative locations throughout the Bay Area. Starting yesterday, the team set up shop on the West Valley College soccer fields in Saratoga. In the meantime, the field at Buck Shaw Stadium enters the last stages of its renovation, with a new natural grass surface that looks ready for opening day. Whatever problems presented by the subpar field during the later stages of the season (remember the "green" dirt?), look to be erased with the newer, more robust surface. Hopefully Buck Shaw Stadium can reclaim its title among MLS players - earned in early 2008, but given back last season - as the best field in the league.

Out at WVC, the Earthquakes held a full-field 11 v. 11 scrimmage during Wednesday's practice session. The two sides were split evenly with starters and reserves for the full time game. The fitness and strength building that the coaching staff has stressed from the start of the preseason was evident, as both sides played with intensity and energy. Then again, maybe they just wanted to kick the ball around after having spent so much time running these past three weeks. Goalkeeper Joe Cannon looked impressive, making some quality saves on the day - and already looks ready for the start of the season.

Thursday's practice focused more on playmaking and moving the ball toward goal. Breaking up into two groups, one led by assistant coach Ian Russell and the other by new assistant coach Mark Watson, players performed passing drills from the halfway line that involved attacking goal from both wings. Defenders started by feeding the ball to the outside backs, exchanging the ball through the defensive midfielders or going directly to the wingers. Possessions moved into the area via crosses from those wingers, or by overlapping runs from the defenders. The forwards were tasked with taking on the ‘keepers - they looked most enthused with the set-up that allowed them ample opportunities to work on their finishing skills. 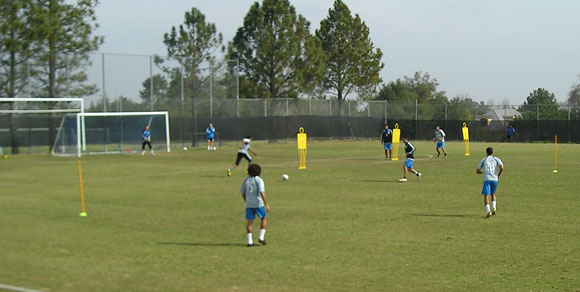 Ryan Johnson and Cornell Glen looked especially sharp on the day. Both Chris Wondolowski and Quincy Amarikwa also had some very nice scores. (Amarikwa also had the best miss of the day - a full extension overhead kick that flashed just wide of the post!) What struck me the most was the excellent work of the goalkeepers Joe Cannon and Andrew Weber. In a drill that does not feature any defenders, every shot on goal was effectively a 1 on 1 situation. With goalkeeping coach Jason Batty shouting instructions at every opportunity from behind the goal, Cannon and Weber came up with some fabulous saves. Cannon especially seemed to be as confident in goal as I have ever seen him in training. 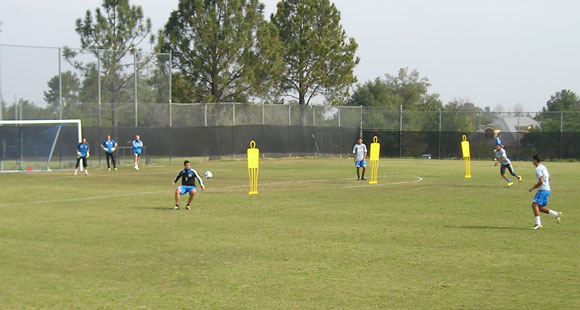 Ryan Johnson begins his run into the area

Two notables from the day were Andre Luiz in the center of midfield and Bobby Convey out on the wing. With Coach Watson yelling encouragement, both players showed a consistency during the drills that lead to numerous finishes from the forwards. The coaches weren't asking for creativity in the run-up of possession, but required well timed and well weighted passes in order for the sequence to progress successfully. Not once did I see either player fail at that responsibility.

Lastly, I wanted to share some more information on one of the two overseas trialists the Earthquakes currently have in camp. The latest target for the Quakes is midfielder Javier Robles of Argentina. Previously with Velez Sarsfield of the Argentine Primera Division, the speedy winger looks set to join the team after contract details can be worked out. General Manager John Doyle shared with me his enthusiasm for Robles, calling him exciting to watch on and off the ball. I'll agree that he looked effective in practice drills today - he spent considerable time playing at right midfielder (with Arturo Alvarez paired as the left midfielder) and supplied a steady stream of quality crosses. I will definitely follow him more at future practices to get a better rating of his abilities. Check back with Center Line Soccer for more details on Robles as they become available.