Mexico takes on Bolivia tonight at the 'Stick

Share All sharing options for: Mexico takes on Bolivia tonight at the 'Stick

When it was announced earlier this year that the Mexican National Team would embark on a six-city tour of the United States, many observed how ambitious the endeavor would be. After all, El Tri would go on to announce an additional five games ahead of their World Cup opening game against South Africa in June. Was is wise to commit their team through such a rigorous run-up to the World Cup tournament?

Clearly the answer is "yes," for the simple reason that it provides manager Javier Aguirre and his coaching staff a chance to evaluate many of the fringe players that are still fighting for a spot on the final 23-man roster heading to South Africa.

Tonight, the Mexican tour begins against Bolivia at Candlestick Park in San Francisco. Game time is 8pm, and as is usual for Mexico games in the U.S., tickets are still available to satisfy the expected walk-up crowd. Additionally, the San Jose Earthquakes offer a ticket special in conjunction with their MLS season home opener against Real Salt Lake. You can find the details for that on sjearthquakes.com.

Looking toward tonight, Mexico will be fielding a line-up that is missing most of their big names -- specifically those players plying their trade in European leagues. The entire roster for the game against Bolivia is comprised of players currently in Mexico, so what we have instead is an intriguing mixture of veterans and youngsters looking to carry the torch for their country this summer in the World Cup.

Chief among the veterans is former Chicago Fire star Cuauhtemoc Blanco. The friendly with Bolivia will mark his first return to the U.S. since the Fire were ousted from the MLS Cup playoffs by the eventual champions, Real Salt Lake. Speaking at a team press conference yesterday, Blanco remarked through a translator "I know that this is my last World Cup. I know that I must prepare myself for the tournament." He included this thought, "It is very important to me and the team that we do well." 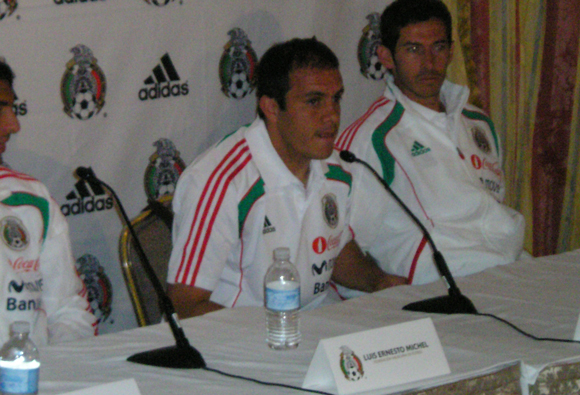 The 37-year old talisman for El Tri is looking forward to playing with some of the less experienced players in the games leading up to the World Cup. With well over 100 caps for his national team, and more than twice as many international goals scored than any of those that will take the field along side him, Blanco is clearly the leader of this team. He hopes that experience will help guide the younger players toward a successful run in South Africa.

"The team is entering a new era going into this World Cup," said Blanco through an interpreter. "The time is nearly up for me, and the younger players are hungry to play. That is why football is so beautiful." 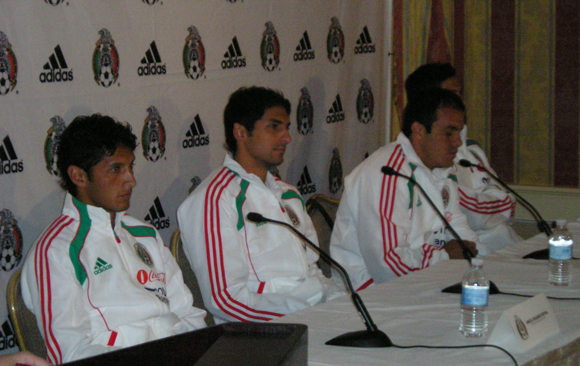 Blanco dominated "possession" during the press conference, as teammates Reyna, Michel, and Castro look on

One of the players ready to take the torch forward for Mexico is the current goal scoring leader of the Mexican Primera Division, striker Javier Hernandez. The 21-year old with Guadalajara should make the start for El Tri tonight, where his dynamic ability will be on display. With first-choice forwards Giovanni Dos Santos, Nery Castillo, and Carlos Vela all overseas, Hernandez has a chance to impress the coaching staff during their U.S. tour.

The good weather should hold, the crowd will be boisterous, the youngsters are ready to make their mark -- all in all a promising mix for tonight's match. Come on down to Candlestick Park at 8pm for a great opportunity to enjoy some Fútbol Internacional here in the Bay Area.