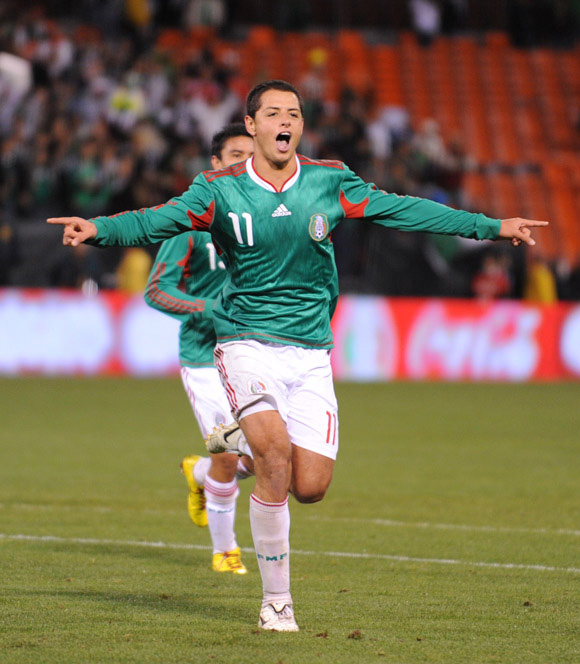 SAN FRANCISCO, Calif. - In a coming out party for striker Javier Hernandez, Mexico demolished Bolivia 5-0 Wednesday night at Candlestick Park in San Francisco. A rising star with Chivas de Guadalajara in his country’s top domestic league, Hernandez scored two goals in the first half to lead Mexico to the easy victory.

Hernandez earned just his second cap with El Tri in this his first start, while the double opened his international scoring account. And despite being substituted at the half, it was an impressive effort for the 21-year-old, who is still considered a long shot to make Mexico’s roster for the upcoming World Cup.

Hernandez was joined on the scoring sheet by midfielder Braulio Luna and forward Pablo Barrera, who each scored in the first half as Mexico took a 4-0 lead into the break. Paul Aguilar, who also recorded two assists on the night, added a second-half goal to complete the scoring.

Head coach Javier Aguirre selected a mix of veterans and relative newcomers for the match against Bolivia. With many of his first-choice selections playing in Europe, Aguirre dipped into the Mexican Premier Division to fill out his roster. “I wanted to see how they could all work together,” he said through a translator. “You saw for yourself how well they performed tonight, but we see them all the time and are happy with the result.” Notables in the Starting XI were the scoring duo of youngsters Hernandez and Barrera. Representing the old-guard were two members of Mexico’s 1996 World Cup squad, midfielder Gerardo Torrado and forward Cuauhtemoc Blanco.

Returning to the United States for the first time since his MLS club, the Chicago Fire, was eliminated in the MLS Cup playoffs, the talismanic Blanco did nothing to disappoint his supporters. Showing his usual display of technical ability, with just a touch of bravado, Blanco frustrated the Bolivian midfielders time and time again in his 45 minutes of action. The 37-year-old veteran of two World Cups — he missed the 2006 tournament after being excluded from the final roster — is aiming to make his return to world’s grandest event after coming out of national team retirement last April at the bequest of coach Aguirre.

Wednesday’s match marked the first of six matches the Mexican National Team will play on their U.S. tour ahead of this summer’s FIFA World Cup. Missing most of their expected starting XI for that tournament, Mexico’s coaching staff looked to evaluate the many players that still could earn their spots in the final roster of 23 heading for South Africa. Facing a South American team that finished next to last in COMEBOL qualifying for the World Cup, the opponent wasn’t expected to test the Mexicans to any serious degree.

Bolivia fielded a team that was also lacking some of their international regulars. As head coach Eduardo Villegas explained after the game, he could not call up some of his first choice players because the match was not being held on a recognized FIFA date. Speaking through a translator, Villegas said “We didn’t have our full strength here tonight. This group still needs to work on their technical ability to be able to compete at the highest level.”

Mexico asserted themselves from the opening whistle, as they found plenty of space down either wing. In the second minute, a carefully weighted ball found Pablo Barrera outside the top of the penalty area. Predicting the play, Bolivian goalkeeper Daniel Vaca met the ball just in front of the player, but could not clear. The follow-up shot was then cleared by a defender.

Barrera didn’t need to wait very long to make amends, as a precision pass down the left side allowed midfielder Braulio Luna plenty of space to deliver a pinpoint cross in front of goal. In just the third minute of the game, the 22-year old Barrera met the inviting ball and easily put it in the back of the net for the opening goal.

The momentum of the game was clearly in favor of the Mexicans, as they pushed forward at will. They forced two corner kicks over the next five minutes, while rarely finding the ball in their own half.

Then, in the 13th minute, Mexico doubled their lead on a sequence that mirrored that of the first goal. This time bringing possession up the left wing, an overlapping run from defender Paul Aguilar gave him the space to feed a cross to the center of the area. Luna was first to the ball, but found his attempt blocked, before possession fell to Javier Hernandez. The Mexican Premier Division scoring leader wasted no time in blasting a shot past the helpless Bolivian goalkeeper.

Fast forward to the 19th minute, and the roles were reversed. Again from a penetrating run down the right side from Aguilar, Hernandez played provider as he flicked the ball while under pressure to a wide open Luna. The simplest of efforts took the score to 3-0.

Hardly a minute later and the rout was on. Bolivia tried to change things up by playing a higher defensive line, and was made to pay for that decision immediately. From nearly the halfway line, Luna spotted the run of Hernandez down the center of the pitch. With a perfectly weighted pass, Luna put the ball right onto the foot of the Guadalajara forward, who took a touch before lashing home his second goal of the game.

Bolivia finally created a scoring chance of their own, as they earned a free kick deep in Mexico territory in the 35th minute. Forward Samuel Galindo sent a powerful shot just over the defending wall that had goalkeeper Jonathan Orozco beat, but where the ‘keeper failed, the goal post came through. The shot ricocheted off to the side of the penalty area, before a follow-up shot was pushed just wide.

Still the difference in quality between the two teams was clear by this point. Even the colors of their uniforms further illustrated the difference. While Mexico featured their new green jerseys with white shorts and socks, Bolivia appeared in the inverse — white over green. A comparison of the teams’ play as Mexico built their big lead was well represented by the opposite scheme of their uniform colors.

Possession evened out over the remainder of the first half, and the clubs entered the break with the score still 4-0 in favor of Mexico.

The second half started out in much the same way as the first. Constant pressure from Mexico earned them a corner kick in the 52nd minute. Luna sent his kick directly into the six-yard box, where the Bolivian ‘keeper tried to deflect the ball from danger. He could only manage to put the ball at the feet of defender Aguilar, who had the easiest of efforts to take the lead to 5-0.

Bolivia nearly pulled one back in the 67th minute as second half substitute Augusto Andaveris slotted home a rebound from a vicious outside shot. Unfortunately for the striker, he was adjudged to be offside, preserving Orozco’s clean sheet.

In the 71st minute, Mexico should have scored again. A clean pass down the right wing to Efrain Juarez left the midfielder one on one with the Bolivian ‘keeper. He smartly fed a pass to the onrushing Alberto Medina, but he somehow conspired to send the ball wide of the post. As if to add insult to injury, he nearly hit the post himself before crashing into the netting.

Then, in the 74th minute, Medina was at it again, as he appeared to miss an open header in the area. His resolve really picked up after the two close calls, and he gave the Bolivian defense all it could handle for the rest of the half.

Mexico continued to pressure Bolivia over the final 15 minutes, but looked to have taken their foot off the accelerator. With little suspense left in the game, they cruised to a convincing 5-0 victory in their first match of 2010.

Commenting on the performance, Coach Aguirre was impressed by the result. “They have a pride in their play,” said Aguirre of his players. “Their performance is an example for everyone. That hunger to be at the World Cup really drives these players. It is great for Mexico.”

The one-sided match was not the only entertainment on the day. As is often the case for Mexico friendlies in the Bay Area, the real action is found in the parking lots prior to the game. Resplendent in the new replica jerseys their beloved El Tri will feature in the World Cup, supporters arrived early to tailgate with an enthusiasm 49er fans could learn from.

Perhaps not looking to leave their impromptu parties, these same fans left it late to enter the stadium, if they even entered at all. The announced attendance of 34,244 was only half-capacity for Candlestick Park. That certainly didn’t distract from the atmosphere inside the stadium, where horns, flags, chants, and even sombreros added to an electric display from the concourses to the seats.

Up next for Mexico is a March 3rd match in Los Angeles against fellow World Cup qualifiers New Zealand. According to coach Aguirre, with the match scheduled on an official FIFA international competition date, he plans to feature some of his European stars against the All-Whites. “We need to introduce them to the team as soon as we can,” said Aguirre through a translator. “We want them to get comfortable playing together leading up to the World Cup.”