Earthquakes hold off Cal in 3-0 victory

Share All sharing options for: Earthquakes hold off Cal in 3-0 victory

The San Jose Earthquakes kicked off the month of March with a 3-0 victory over the University of California Golden Bears at West Valley College in Saratoga. A first half finish from Ryan Johnson, along with second half strikes from Brad Ring and Quincy Amarikwa gave the Quakes their fourth win of the preseason.

Looking quite strong from the opening whistle, the Earthquakes continued their focus on getting ready for the regular MLS season start later this month. The match was a friendly only in name, as numerous Quakes showed their midseason form against a Cal team that was expecting a less intense affair. With roster spots at a minimum as San Jose prepares to trim the roster to meet today's the still-to-be-announced MLS compliance date, players on the fringe of making the squad saw this as an opportunity to make their case to Head Coach Frank Yallop and General Manager John Doyle.

"We've got some tough decisions on some of the players we have, because we have too many players in for the spots available," said Yallop after the game. "But you know we are just trying to get a squad that is well rounded and solid, one that is ready to go for the season."

With that is mind, Yallop put out a starting XI that was a mixture of expected starters and rookie hopefuls. Defender Justin Morrow, midfielders Steve Beitashour and Brad Ring, and trialist forward Luis Javier Guarino all saw playing time against Cal alongside veterans Jason Hernandez, Ryan Johnson, Bobby Convey, Cornell Glen, and others. Goalkeeper Joe Cannon made the start, after sitting out last Saturday's game against the Fresno Fuego, and completed the shutout over the overmatched Golden Bears.

From the opening whistle, the Quakes looked content to knock the ball around the defense, as they dared the Cal midfield to venture out of their own half. In the sixth minute, the tactic worked as great interplay between Convey and Chris Wondolowski freed Beitashour down the right wing with space to cross into the penalty area. Glen awaited the delivery, but needed to be an inch or two taller to convert the inviting ball.

San Jose continued to hold the majority of possession, and were quick to harrass the Cal players when they didn't. Not holding back, Aaron Pitchkolan made a crunching tackle on a Bear midfielder near the halfway line in the ninth minute, and Beitashour repeated the offense two minutes later. Both players were sternly warned by the referee, with Beitashour earning a yellow card for his efforts.

The interplay seemed to fire up the Bears for a short spell. In the twelfth minute, Cal found enough space on the right wing to allow a perfectly crossed ball to enter the 6-yard box, where it was flicked on by a forward past a helpless Cannon. The celebration was premature, as the sideline referee had her flag up indication offside, and the goal was disallowed. The estimated crowd of 17 fans -- most all wearing some form of Cal merchandise -- groaned in disapproval.

The assembled masses didn't have long to wait to see the scoring begin, but they couldn't have been happy to see the Quakes celebrating instead of the Bears. Just a minute later, Wondolowski found room in the penalty area to turn a shot toward goal. The goalkeeper made a fine save, but the rebound came right back to Wondo. He deftly slid the ball to his left to Johnson, who one-timed it into the back of the net for the 1-0 lead.

Glen was next to test the Cal ‘keeper as his long range effort in the 15th minute forced a tough diving save. The newest Earthquake, midfielder Javier Robles tried his luck with a powerful, but errant, drive from distance, as San Jose continued to dominate possession.

In the 26th minute, Beitashour earned a free kick just outside the area as he made his way toward goal. Convey directed the free kick into the mix, but the defense cleared the ball to the top of the area. Robles stood waiting for the ball and fired in a low shot that took a deflection right to the goalkeeper.

The Quakes defense had little to do during the first half, as they focused most of their efforts toward bating the Cal players into their side of the field. Even when pressed, the defense did not bend, as seen during a Bear breakaway following a cleared Quakes corner kick. Holding up at the halfway line, Jason Hernandez was called to dispossess a surging Cal forward before he could race clear on goal. Looking every bit the team Defender of the Year for 2008, Hernandez took the ball away and immediately started a counterattack with a pass back to the midfield. It was as close as Cal would come to getting back into the game over the rest of the first half.

Beitahour continued to impress on the right wing as the clock approached half time. In the 43rd minute, he displayed some excellent dribbling as he broke through three defenders on his path toward goal. His shot from a relatively tight angle required a smart save from the Cal goalkeeper.

Beitashour was at it again in the 45th minute, when he broke free at the upper corner of the penalty area. He lashed a shot that unfortunately was straight to the ‘keeper. The referee soon thereafter signaled halftime, and the Quakes retreated to the sidelines with a 1-0 lead. 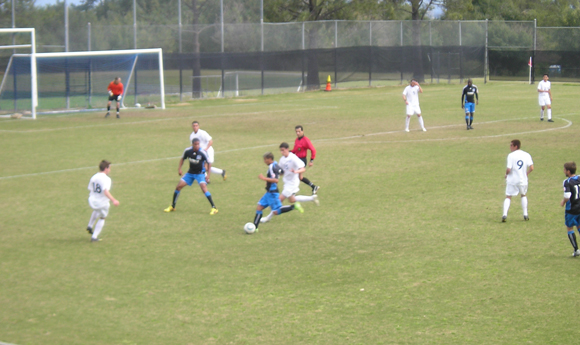 The second half started with numerous changes to the line-up as Quincy Amarikwa and Guarino made their way up top, with Joey Gjertsen, Ring, Antonio Ribeiro, and Omar Jessey manning the midfield. Beitashour remained in the game, moving to the defensive line replacing Chris Leitch.

Amarikwa and Jessey worked well together in the opening minutes of the second half, nearly creating an excellent scoring chance for Guarino. The Cal defense managed to clear the ball, but then faced the resolve of Ring to keep the ball in the Bears half of the field.

The energy and vigor of the inserted substitutes helped ratchet up the intensity of the match as Amarikwa and Beitashour both received yellow cards for aggressive play. In the 56th minute, a light shoving match ensued as the Cal players felt the Quakes were being too aggressive for a scrimmage match. After restoring order on the field, and talking to both benches, the referee let play continue.

Jessey, only 17 years old but extremely gifted with the play, made successive drives down the right side before delivering fine crosses into the 6-yard box that required the ‘keeper's full effort to contain. While still looking confused at times as to where to position himself during the run of play, the raw talent of the Gambian youngster was clearly on display.

"Omar is going to be a project, but he is a very exciting one," exclaimed coach Yallop after the game. "He has that natural ability to go by people and create havoc with the ball. It is now up to us to coach him into being a solid player. He is someone who already is very good, and we hope will only get better."

Cal had a great opportunity to level the score in the 61st minute after a hard foul at the top of the area left them with a great free kick chance. Instead, the resulting low shot was comfortably smothered by Cannon as he dove to his right to catch the ball.

In the 70th minute, it appeared that the Quakes had doubled their lead when Guarino slotted home a shot after Amarikwa found him with a perfectly slotted through ball. However, the sideline referee raised her flag to signal offside, and the score remained at 1-0.

Unlike in Saturday night's game in Fresno, the Earthquakes played with more energy as the match continued. Looking unfazed in the defensive third, San Jose continued possession after possession toward the Cal goal. Following a corner kick in the 81st minute, they were rewarded for their efforts.

Jessey struck a clean delivery into the penalty area that was knocked out by the defense toward the middle of the field. Seeing space in front of him, Ring timed a run to meet the ball for a volleyed attempt on goal. With the goalkeeper screened, the ball safely passed through the crowd of players in the area and tucked in nicely just inside the righthand post to take the score to 2-0.

While still an unsigned rookie, Ring has impressed throughout the preseason. "We want to keep Brad, so we'll try to figure something out," explained Yallop. "The squad is nearing the need to be in (MLS roster numbers) compliance. We should be able to add him to the team, but there are no promises at this time."

In the 85th minute, Jessey displayed another flash of brilliance as he rounded a Cal defender near the byline, and raced toward goal. However, his shot from a very tight angle was saved, when he might have been better served to feed the ball to an onrushing Amarikwa.

Two minutes later, an almost identical play unfolded, with Guarino playing the role of provider. After taking the ball past two defenders following a takeaway at the top of the penalty area, Guarino lashed a cross into the 6-yard box that was met by a high-flying Amarikwa. Scoring an acrobatic goal with his right foot while airborne in front of a flat-footed Cal goalkeeper, Amarikwa was finally rewarded for a hard day's effort.

"With Quincy, he's still learning the game," said Yallop. "It's not an easy position to play up front when there is a lot of action around you and people are running off you. But he is trying hard and giving it everything that he has in every game. Obviously he needs to learn more to be effective up front, but he did score a goal for us today. Hopefully he can keep improving."

The final minutes played out, and San Jose congratulated themselves on the 3-0 victory. Though not nearly as formidable opponent as the Quakes will see once the MLS regular season begins, the match was a great opportunity to take the next step toward being ready for the home opener on March 27th against Real Salt Lake. 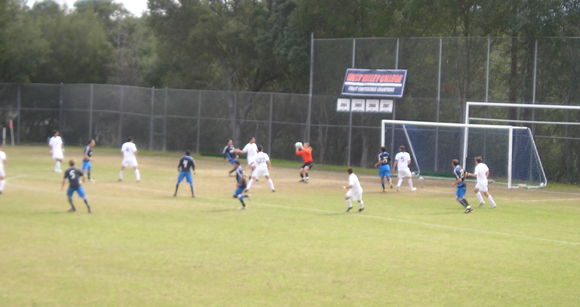 Cal goalkeeper thwarts an Earthquakes attack with the catch save 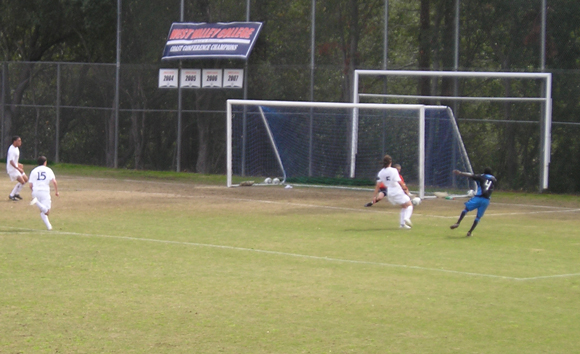 Omar Jessey gets off a shot that is saved 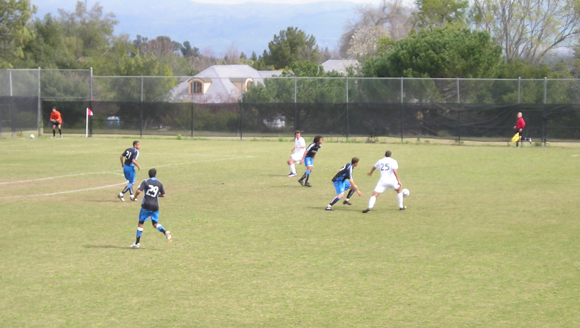 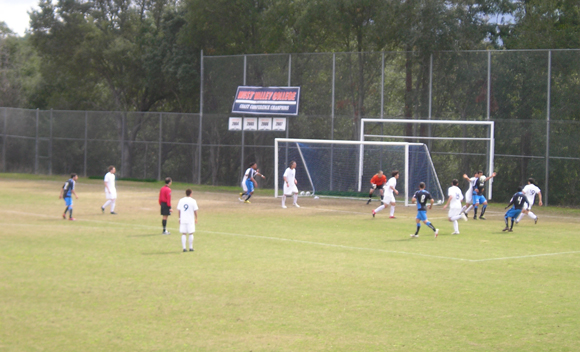