(DANVILLE, CA) The sun was shining brightly, belying the chill in the air breezing through the Mustang Soccer Complex in Danville Wednesday morning. And while the observers were bundled up, the FC Gold Pride players were boundless on the field in taking a 3-0 victory over Japanese club TEPCO Mareeze in their first match of the 2010 WPS preseason. Goals from Christine Sinclair, Kelley O'Hara, and Mandy Moraca combined with a solid defensive unit lead by Rachel Buehler made all the difference on the day.

Full training for the Gold Pride began this week, so playing an exhibition game just two days after reconvening from a long off-season layoff might seem a bit ambitious for a team still coming together after numerous roster changes. After all, with new draft picks, ex-LA Sol players, and various trialists still getting to know last season's returning players, complex tactics were not the order of the day. For Head Coach Albertin Montoya, the plan was to keep things simple against the technically sound and surprisingly speedy Japanese club.

"We decided to play low pressure and let them combine passes in front of our midfield," said Montoya. "We lured them forward and were able to get in behind their defense and create some dangerous opportunities with our wingers and forwards."

For the players, the coach's message was even simpler. "Just have fun," laughed Sinclair. "It's our first game of the preseason, so go out and enjoy it. Now that we see where we are, we can get to work on things during camp."

Sinclair opened the scoring in the 31st minute with a solid shot past a helpless Japanese goalkeeper. "I got the ball just past the half, and Tiffany (Milbrett) pulled their defense away from me. It was like the Red Sea parting, as no one stepped up, so I soon found myself one-on-one with the goalie and I put it away." 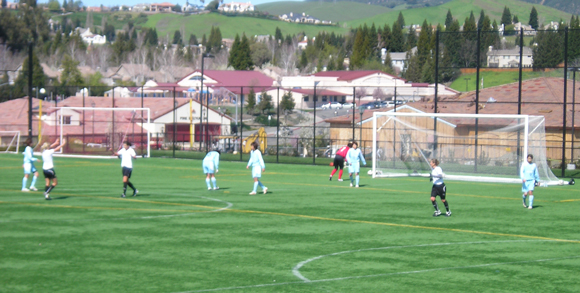 The goal was a classic clinical finish for the Canadian international, who recently tallied her 100th career national team goal in a 3-0 triumph against Poland on February 20th. Sinclair becomes just the tenth female soccer player to reach that milestone, joining her Gold Pride teammate Milbrett on that exclusive list. "I've been waiting almost a year to get that goal. You see the list of players that have reached 100 goals, and I am very honored to be a part of that group."

Sinclair looked to be in great form starting off the preseason. And coming next week, she can look forward to partnering with the world's best player, as Marta joins her up front in a very potent striker tandem. "It's going to be fun, I see a lot of potential," shared Sinclair. "We are going to get a lot of chances up front."

For the remainder of the first half, the Gold Pride seemed content to absorb moderate pressure from the Japanese while quickly counterattacking through the wingers and strikers. However, most of the play remained near the center line, and neither goalkeeper was tested as the half ended 1-0. 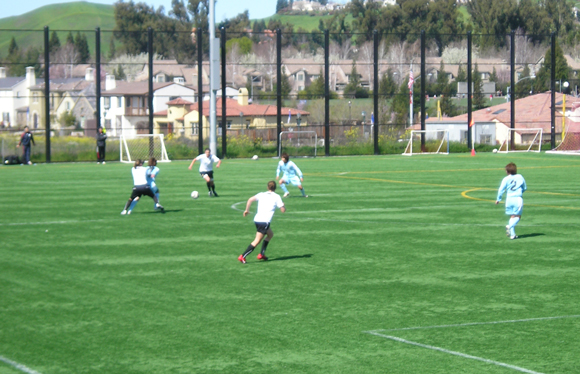 FC Gold Pride opened the second stanza with much more determination going forward. Always a difficulty for the club in 2009, finding ways to create offense and score goals is the number one priority for this season. Using speedy wing play, and solid passing from the midfield, the Pride pressured Mareeze relentlessly for the first 10 minutes of the second half. Their effort was rewarded as O'Hara scored an upper 90 blast from just outside the penalty area to double the lead to 2-0 in the 54th minute.

"Rachel (Buehler) did a great job of getting me the ball," explained O'Hara. "I played it to the midfield, and quickly got it back. I turned my defender and had a look at goal so I took a shot and it went in." Modest words from the young rookie, as the strike was well struck to the upper left corner.

"Kelley O'Hara showed what she does best -- putting the ball into the back of the net," added coach Montoya.

He didn't just praise the ex-Stanford star and 2009 NCAA player of the year, but he recognized the contributions by the defense that lead up to the goal. Returning starter Rachel Buehler, paired with newcomer Canadian Candace Chapman, stifled every attack by the Japanese players throughout their time on the field. For Buehler, her passing out of the back was a big reason the Pride were able to capitalize against the Japanese defense.

"She has gotten so much better over these last few months because she's now a regular starter with the national team," explained coach Montoya. "Her game has improved dramatically. She's come into camp (after a fabulous performance at the Algarve Cup), and is now the leader of our defense."

O'Hara's strike did little for the confidence of the TEPCO Mareeze players, as they seemed to lose their resolve to push back the Gold Pride's advances. Some tough tackles were evident, low-lighted by a knee knock suffered by new Pride player Solveig Gulbrandesn of Norway midway through the second half, but the Japanese never threatened in the offensive third. A stoppage time goal from Moraca after a Kristen Graczyk header rebounded off the post finished the scoring on the day.

As the players left the field, there were smiles all around. For goal-of-the-match scorer Kelley O'Hara, it was the start to a dream come true to play professional soccer. "It's been fun, I've had a good time," she shared. "I've always wanted to do this and having the opportunity is wonderful. I've already learned so much this week from the players around me, and I'm so excited looking toward the upcoming season." With her recent call-up to the U.S. senior squad, the future looks bright for the dynamic forward.

The two teams face off again this Saturday evening at 6:30 p.m. at the Mustang Soccer Complex in Danville. Admission is free to the public and the match promises to be a great chance to reacquaint yourselves with Women's Professional Soccer in the Bay Area ahead of the 2010 season.