Share All sharing options for: Earthquakes training news and notes

With a 6 p.m. start time for the season opener against Real Salt Lake this Saturday, the Earthquakes started their Tuesday training session at the same time in an effort to replicate the lighting and field conditions they will face against the reigning MLS Cup champions. Even better was the opportunity to practice on their home turf at Buck Shaw Stadium, instead of the well worn grass at West Valley College.

A crisp game of half-field keep-away was played out between to group of nine players. One team held most of the expected starters we should see on Saturday, and included Cornell Glen up top with Ryan Johnson. Still missing from training is new forward Eduardo, who has not yet returned from Brazil. I was told he is healthy, and may take the field this weekend if he returns in time. Bobby Burling paired with Jason Hernandez in the center of defense, but may yield that position to Ike Opara in the starting XI as indicated by coach Frank Yallop late last week.

Joe Cannon and Chris Leitch are back in action too, after missing the preseason match against Portland due to their participation in the MLS CBA negotiations. Ramiro Corrales will be the team captain to start the season, and play in the left-back position, while I expect we'll see Arturo Alvarez and Bobby Convey out on the midfield wings. Central midfielder Andre Luiz looks no worse for wear after playing 75 minutes against the Timbers, and should start with Javier Robles on Saturday.

On the injury front, Brad Ring is still on track to return from a hamstring strain suffered in the preseason friendly with Houston back on St. Patrick's Day. He spent most of practice running and stretching with head trainer Bruce Morgan, before applying an ice-bag over the affected muscle.

Brandon McDonald also appears to be back to full strength, and participated in drills and scrimmages as a defensive midfielder -- his natural position. While he was very effective in defense last season, it appears McDonald will earn a significant portion of his playing time this season back in midfield. Coach Yallop often states that he values players that show versatility on the field; McDonald certainly fits that mold.

On a fun note, as the team rested between drills, I caught sight of Alvarez and Robles immersed in a beautiful game of keepy-uppy. Feet, legs, chest, head were all involved as the ball passed between them in every imaginable fashion. The game only stopped as the players were called back to training.

An intense 10 v. 10 scrimmage ensued, with some excellent finishing from Cornell Glen and smooth possession from Andre Luiz. Quincy Amarikwa was his usual active self as well, and had a highlight reel volley attempt near the end of the game. Even the young Gambian Omar Jessey got fully involved with the action — he is fun to watch, but still needs to refine his game. Jessey is still not officially signed with the team, but a team spokesperson indicated that the process was moving forward. 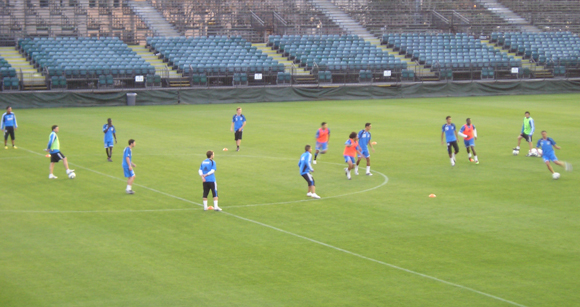 The last activity for the evening was a finishing drill, as the central midfielders fed long passes to the wings, where they crossed in for the forwards. Two striking teams participated — Glen and Johnson, and Amarikwa and Chris Wondolowski. In the spirit of competition, the two duos kept score of successful finishes as they faced the rotating ‘keepers Cannon and Andrew Weber. Back and forth the scoring went, until Wondo and Q prevailed 10-8. 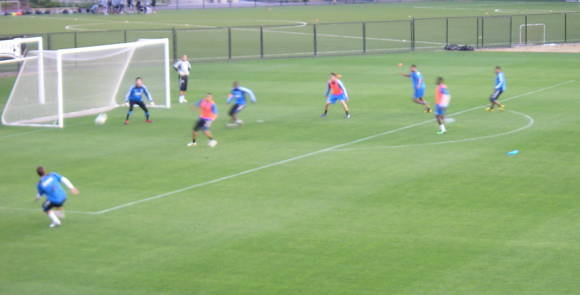 Convey sends in the cross toward Glen and Johnson (sorry for the quality -- bad lighting!)

Practice ended soon thereafter, and the players and coaches dispersed to the locker room. The overall tone of the evening was one of intensity mixed with confidence. Everyone involved looks ready for the season to get under way.

One last item I want to share: this Thursday evening, as part of the MLS First Kick weekend, the San Jose Earthquakes are hosting an event at Rosie McCann's Pub at Santana Row in San Jose starting at 6 p.m. Quakes coaches and players will be in attendance and the MLS season opener between the Seattle Sounders and the Philadelphia Union will be on the televisions. But most importantly, Center Line Soccer will be there hosting a live podcast taping. We'll interview Frank Yallop and various players, and will also look forward to hearing from the supporters in attendance. It promises to be a great after-work party, so don't miss it!