FC Gold Pride could go from worst to first in 2010

Share All sharing options for: FC Gold Pride could go from worst to first in 2010 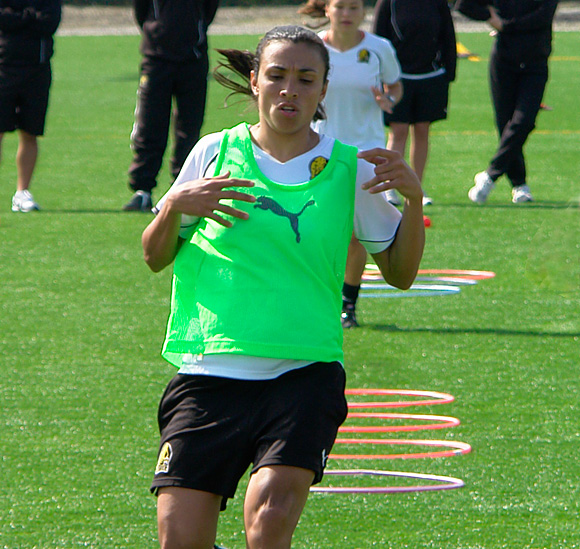 Marta is still working on her match fitness, but she still managed to set up two goals in FC Gold Pride's lopsided 10-0 win over USF on Thursday night at Kezar Stadium. Photo: Jay Hipps, centerlinesoccer.com.

Just how good is FC Gold Pride? Thursday night’s 10-0 exhibition win at San Francisco’s Kezar Stadium isn’t the best game to judge them by, since it came against the University of San Francisco women’s team, but consider this: FCGP were missing five players due to international duty, and still were able to field a side that included such stars as Tiffeny Millbrett and the best female player in the world, Marta.

Last year, FCGP finished dead solid last in Womens Professional Soccer, but for 2010 there’s a lot of new faces on hand, and smiles all around. For example, two new FCGP’ers, Marta and Camille Abily, combined for 18 goals last year for the dearly departed LA Sol, while the Gold Pride scored 17 as a team. All told, the FCGP roster now features 10 internationals and 4 Olympic gold medalists.

“We’ve had a great 3 weeks of pre season,” coach Albertin Montoya said. “The team has come together very well. (We’re) very dynamic in the attack, the movement off the ball, and we’ve got a lot weapons up top this year. It’s exciting. We’ve got speed throughout the field, which is always very difficult to defend, and now you add the movement and skill we have. You put it together, and it’s shaping up to be a pretty good season.”

Preparing for their second season has been a challenge as FCGP, the lone WPS side west of St. Louis, has not been able to match up against other WPS teams in pre-season games. Still, with such a talent laden roster, in-practice scrimmages have been rather competitive.

“It’s hilarious. It’s just tremendous,” forward Christine Sinclair said of those practice games. “No matter what team you’re on, you have some of the best players in the world on your team. I don’t think that’s something we had last year, and it just makes this year so exciting.”

“Come our first game, it could be a bit of a wake up call,” Sinclair added “but we’ve played some boys teams; that always helps. They’re faster than any WPS team we’re going to play.”

“Luckily, a lot of us have been playing for our national tams, so we’ve also had those game experiences before coming here.”

“We’ve been playing U-17, U18 boys teams which is quite a challenge,” coach Montoya said. “They’re men, getting ready to go to college. We had an excellent game last week against a U-18 team, one of the top teams in the area, and we ended up winning 1-0. The reason we played that U-18 team is that I wanted us to be exposed, I wanted to see what we had, and I was pleasantly surprised.”

“We have two more games scheduled against boys teams before the season.
It is difficult, because you don’t know strong some of these other WPS teams are. They’re out in Florida right now, playing each other, but that can be good for us, too. They can’t see what we have, and how well we’ve come together,” Montoya said.

“I think we’re light years ahead of where were last year,” Tiffeny Millbrett said,
“This will be a very fast, dynamic, exciting attacking team, and you’ll see a lot of movement out there from a lot of different players. You want those creative dangerous players, and we have that this year.”

When it comes to “creative” and “dangerous,” no player in the league fits that description more than Marta Viera da Silva, a.k.a. Marta, a.k.a. FIFA Women’s World Player of the Year for the past four years.

“I haven’t played with her much, a week and half, but what you see is a player who brings a lot of combination play through the middle,” Millbrett said. “I’m excited to be playing with her.”

Thursday night was Marta’s first match with FCGP, and her first game after a three month layoff. Even with the players not wearing numbers on their jerseys in the exhibition game, it was easy to pick her out of the crowd. Marta played the first 45 minutes, and ran the offense from a classic #10 position, contributing a pair of assists while creating chances with almost every possession. (USF Goalkeeper Sarah Garland will be telling her grandkids some day about the three highlight reel saves she made against Marta Thursday.)

“Her pace her quickness, it just changes the game,” coach Montoya said. “Marta is known as a great goal scorer, but you can see how well she sets everyone up too. And, as she gets more comfortable, as she gets more fit, she also be able to add that scoring touch.”

“I’m still trying things out, still developing with the team,” Marta said later through an interpreter. “I’m still not 90 minutes fit, and haven’t practiced in three months.
I will play in WPS, (that’s) more important, so I took it easy (Thursday).”

Soccer connoisseurs in Northern California will have to work a bit to find FCGP matches this summer, as the club has moved out of Buck Shaw Stadium and will play their first four games at Castro Valley High School while waiting for their new home, Pioneer Stadium at CSU East Bay (in the Hayward hills), to be renovated.

As coach Montoya, and everyone associated with the club said repeatedly Thursday night, “It’s going to be exciting.”