Scott Sealy returns to the Earthquakes

Share All sharing options for: Scott Sealy returns to the Earthquakes 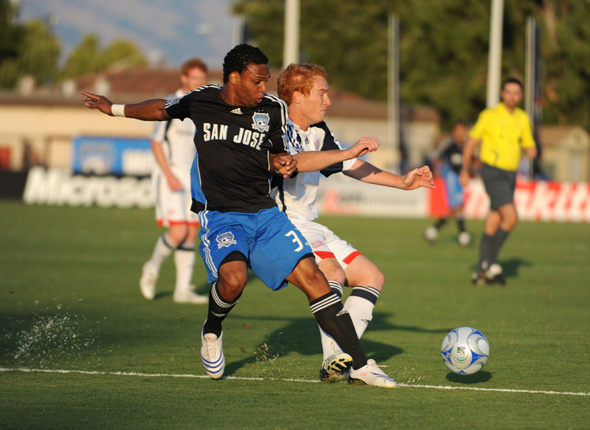 The worst kept secret around Buck Shaw Stadium was finally revealed yesterday, as the Earthquakes announced the signing of forward Scott Sealy to the team. The Trinidad native returns to the Quakes after spending the last 18 months in Israel. In 14 games for San Jose after being acquired from the Kansas City Wizards in the summer of 2008, Sealy scored 3 goals and had 3 assists as the team made near-successful late season run for a spot in the MLS Cup playoffs.

"Being able to bring Scott back is something we have wanted to do since we finished the 2008 season," said general manager John Doyle. "He was a big part of our success in 2008, and he is a forward that holds the ball well and brings other players into the game. He will be a great addition to our team."

While in Israel, Sealy played for Maccabi Tel Aviv and Bnei Sakhnin over the course of a season-and-a-half, and scored one goal. While utilized as a forward in MLS, he was asked to play multiple positions in Israel.

"They pushed me around quite a lot," Sealy shared after Tuesday's training session." I was on the right, I was on the left, I played central midfield and I played striker. It was unsettling to not play my preferred position (of striker), but it was good and challenging for me. It was something I looked forward to each week."

Sealy has been with the team since last week, but is still awaiting receipt of his International Transfer Certificate before he is eligible to play in a proper game. In the meantime, the forward has been focusing on his personal fitness as he gets used to his new team.

"Right now I need to get fit so that I can contribute right away," said the 28-year old forward. "Hopefully that will take a week, maybe two weeks. Obviously, that will be Frank's (Yallop) call."

Due to league rules, when Sealy decided to return to MLS his player rights were still owned by the Earthquakes. While he didn't elaborate on that situation, and whether rejoining the Quakes was his first choice, Sealy did say he was happy to be back in the United States.

"The facilities are not the best (in Israel), the ones here in MLS are a lot better," explained Sealy. "The Israeli league is not as big as those in Europe, but they are making good strides. It is a good league."

Sealy joined the Earthquakes in the summer of 2008 along with Darren Huckerby, Francisco Lima, and Arturo Alvarez, and the foursome immediately changed the fortunes of the struggling expansion club that was mired in the standings basement. San Jose managed to climb out of that early season hole to become playoff eligible by the end of September. However, a lackluster October doomed them to miss the annual MLS Cup tournament.

"I think that team was a good team," remembered the Trinidad and Tobago National Team player, "but now we individually have better players. We are not collectively on that same page yet, and that will be our biggest challenge. I think if this team can do that like we did in 2008 we will be a much better squad then the past couple of years."

The Earthquakes certainly sport a deeper roster in 2010, and Sealy knows that there will be more competition for playing time in his second stint with the team.

"That is the nature of the business, you are always going to have guys you need to compete against," recognized Sealy. "At the end of the day, the coach is not going to say ‘I like you, or I like the other one,' he's going to look for guys who get the job done. I believe in my abilities and I like my chances when I am fit that I will be playing."