Share All sharing options for: Joey Gjertsen's day off 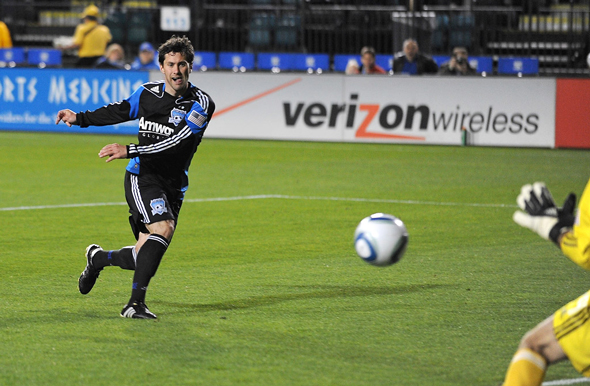 As the Earthquakes players and staff filled the locker room and celebrated their convincing 2-0 victory over the New England Revolution Saturday night, midfielder Joey Gjertsen looked up at the whiteboard on the opposite wall and saw some refreshing news.

"'Sunday and Monday off'," a visibly exhausted Gjertsen pointed out. "That will be nice."

Gjertsen had just completed his third full game in eight days -- including a thrilling extra time match last Wednesday -- logging more than 300 minutes of action on the field.

"Coming into the first half, my legs were a little heavy," said Gjertsen. "There were times when I wanted to challenge their defenders, but I just couldn't get my feet underneath me."

The 27-year old has quickly become an important part of the Earthquakes offense, as his hustle play in the 57th minute to challenge for a loose ball near midfield eventually led to the first goal of the game. Gjertsen, along with Ryan Johnson, was credited for an assist on the Chris Wondolowski score.

"In the second half, we got stronger as a team, and I did as well," said Gjertsen. "I was able to push through the whole game."

Little attention was paid to the signing of Gjertsen back in early February. In fact, most of the fan chatter was still focused on general manager John Doyle's declaration that the team was looking to sign "four international players" in the offseason. And once Gjertsen, whose professional career had been played exclusively north of the border, was recognized as being an American and not a Canadian, his acquisition seemed to drop from discussion.

While many of the off-season signings for the Quakes are still working their way into the team, Gjertsen has blended in very nicely. With the versatility to play both central or outside midfielder, and the attacking verve to play at forward, Gjertsen has been a valuable asset for coach Frank Yallop in filling out his starting XI. These past few weeks have seen the former USL-1 Most Valuable Player settle in nicely as the right winger in Yallop's 4-4-2 formation.

For the team, the performance against New England was in stark contrast to the tentative play evident in the season opening 3-0 loss to Real Salt Lake. Gjertsen, who made his MLS debut in that match as a halftime substitute, recognized that the team's identity was better revealed in the win against the Revolution.

"We knew the result against (RSL) was not accurate," Gjertsen affirmed. "Unfortunately it was our first game of the year and that is not obviously how you want to start out. We knew we had to go out there tonight and show everyone our real team, and I think we did a great job of that."

But with his legs needing a break after a tough week of soccer, Gjertsen had little else on his mind other than those four words written in red marker across the locker room.

"I'm definitely going to take them off," smiled Gjertsen. "I'll be on the couch for the next two days straight."