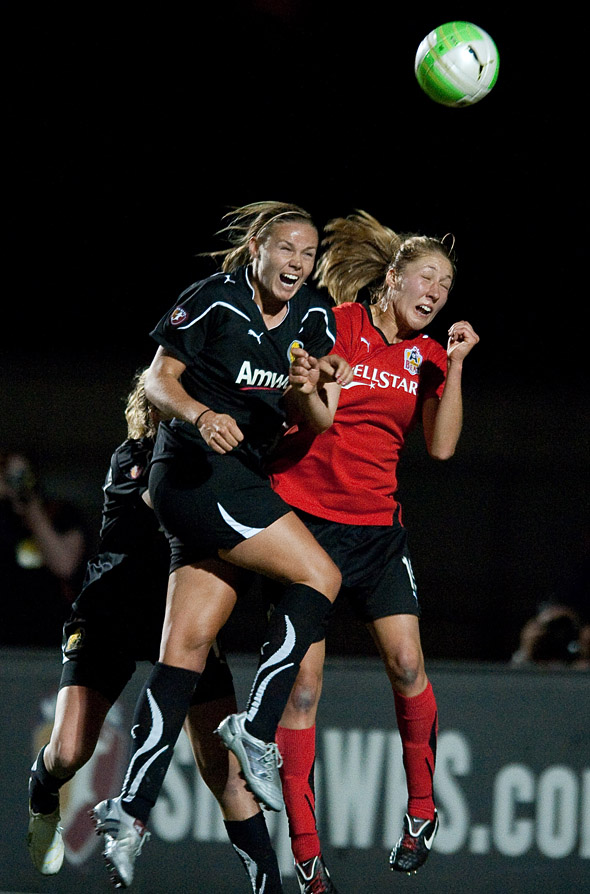 It wasn’t exactly your prototypical soccer match for FC Gold Pride. But with the talent that this club can put out there each week, they don’t have to play their best to come out on the winning side.

Gold Pride played a sluggish game, picking up the play in the final five minutes, culminating with a Carrie Dew goal in the 89th minute, to earn a 2-1 win over the expansion Atlanta Beat on Saturday night in front of just over 3,000 fans at Castro Valley High School Athletic Stadium.

FC Gold Pride scored a goal in the first 10 minutes of play, played 80 minutes of lackadaisical soccer against the Atlanta Beat, then scored in the final minutes, winning a hard-fought, ugly game, 2-1, in front of their home fans at Castro valley High School Athletic Stadium on Saturday night.

“The way things are in (WPS), I will take an ugly win,” said FC Gold Pride coach Albertin Montoya, “because three points goes a long way.”

The winning play started as Kiki Bosio took her patented flip throw, eliciting its typical “oohs” and “ahhs” from fans, which sailed into the six-yard box. Ali Riley, who was suffering from flu-like symptoms, tracked down the loose ball by the far post and sent it back across where Dew headed it home past Beat keeper — and former Pride backup — Allison Whitworth.

“Kiki’s flip throw is so dangerous. It’s basically a corner kick,” said Dew. “So we just threw numbers in there and were able to get a goal out of that.”

“Her confidence is growing,” said Montoya of Dew’s play. “We gave her more freedom to go forward this weekend.

“Last year balls weren’t bouncing our way,” Montoya added. “This year — knock on wood — they are.”

Dew’s goal came 78 minutes after Tiffeny Milbrett opened the scoring for the Pride in the 10th minute.

With all the play lopsided on the Pride’s right side, Kelley O’Hara made a quick switch of fields, playing it to center midfielder Camille Abily, who turned and sent a through ball to Milbrett in space. Milbrett got behind the defense with only Whitworth to beat and she didn’t disappoint, giving the Pride a 1-0 lead.

Milbrett was in the starting lineup because of the absence of Christine Sinclair, who was away with the Canadian National Team taking on China in the Far East. Also missing the game was Candace Chapman, who joined Sinclair with the Canadian team.

“It’s always nice to get minutes in there and to do your job for the team and that’s putting the ball in the back of the net,” said Milbrett. “Nothing gives you a greater sense of satisfaction.”

Gold Pride upped itself over the .500 mark, improving to 2-1 on the season, totaling six points and a temporary hold on first place, going into Sunday’s games. Atlanta fell to 0-2-1 with the loss, and remain in the WPS basement with one point.

“We wanted to go for it and try and get three points,” said Beat coach Gareth O’Sullivan, whose team has played all three of its games thus far on the road. “We had some chances but didn’t put them away and got punished at the end.”

Atlanta's tally came when Monica Ocampo took advantage of a sloppy clearance by Barnhart in the 25th minute. Barnhart’s clearance went to right to the Angie Kerr of the Beat, who knocked it back toward the box, where Ocampo split Rachel Buehler and Dew and slid a shot by Barnhart, knotting the game at 1-1.

In the 43rd minute, Atlanta looked to put itself in the lead for the first time all year. Ramona Bachmann had some individual brilliance, getting down the pitch and deked Buehler to free up her shot from just inside the box. Bachmann’s shot, however, was gobbled up by Barnhart, who dove to her right to deny the Beat a lead.

In stoppage time, the Pride had its own chance at taking a lead into the locker rooms. Buehler served up a free kick from the half field stripe which Dew flicked toward goal; however, Whitworth was able to track back and deflect the ball out for the corner.

One minute into the second half, Kandace Wilson showed off her speed, tracking 15-plus yards to catch Ocampo and wrestle the ball off her foot and away from danger.

“Her speed is definitely an asset for us,” said Barnhart. “If it looks like they are in behind (the defense), she’s able to track back and win balls that probably other people wouldn’t be able to.”

Barnhart made another solid play in the net, stopping a shot by Bachmann destined for the lower corner of the net in the 50th minute, keeping the score even.

Bachmann made another hard run at goal off the left flank in the 60th minute but Barnhart raced off her line to steal the ball off her foot.

Gold Pride got its first real chance at net of the second half in the 62nd minute. On a broken play, Marta took the ball just outside the Beat 18-yard box and flipped a ball targeted for Dew’s head, which she met solidly, beating Whitworth. Dew’s header, however, sailed over the net.

Bosio, who came on for the Pride in the 60th minute, got a crack at beating Whitworth in the 67th minute. After a strong tackle in the midfield by Buehler, Marta received the loose ball and took off down field before finding Bosio who, in one swift motion, spun and nutmegged a Beat defender before having a go at goal, which went awry.

Mami Yamaguchi nearly took advantage of a miscue by Milbrett, taking an errant pass and making a beeline for goal before rifling a shot for the upper-90, which whizzed just outside the post.

Dew had another header nearly go in for the Pride off a corner served in by Marta in the 81st minute, but it was just barely nicked by the fingertips of Whitworth and over the crossbar for another corner which the Pride couldn’t capitalize on. Her eventual winner means she won't regret her misses too badly.

FC Gold Pride travels to New Jersey to take on Sky Blue FC in a rematch from week two; Atlanta continues its road trip, heading to West Chester, Pennsylvania, to take on the Philadelphia Independence. Both games kick off at 6 p.m. ET on Saturday night.