Share All sharing options for: Amarikwa: Gone but grateful 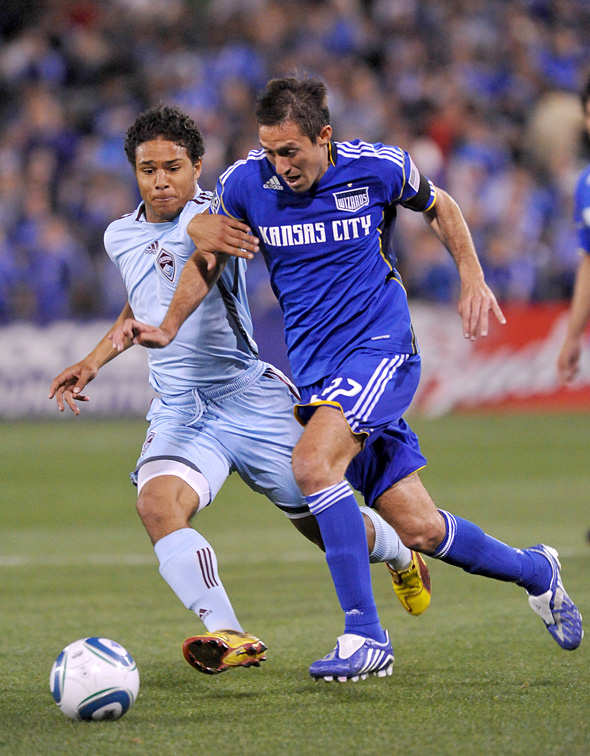 It's only been about three weeks since young forward Quincy Amarikwa was traded from the Earthquakes to the Rapids, but he's returning to Buck Shaw Stadium this weekend as San Jose takes on Colorado Saturday night. Center Line Soccer's Embele Awipi caught up with Amarikwa earlier this week to discuss life since his big move.

How did the Quakes break the news to you?

I was in Davis taking care of my classes and I got a call from John Doyle to come meet him in the office. So I drove out to San Jose, and John told me they decided to trade me to Colorado. It was probably a three-minute conversation.  He said I’d get a call from the coach and general manager over here and then I’d know what to do.

You are still taking classes?

I have three classes left, but I’m not able to take them now that I’m in Colorado.  After I got traded we went on a four-day trip to Kansas City. Then we got back for three days and then went on a trip to New England. So I haven’t completely settled in and figured how to take my last classes, but I should be able to figure something out, hopefully.

How many Davis guys are in MLS? Any special leeway for being an athlete?

I think I’m the first and only to make a senior roster out of Davis. And no, there’s no special treatment for athletes at Davis.

It made it a little difficult and I did a lot of driving between San Jose and Davis to make classes, but I want my degree. I’m so close to being finished, and I want to play soccer too.  So whatever it took to do both, it was great to be in San Jose and be as close enough as I could be play soccer and take classes. Regardless, hopefully offseason maybe I can find an extension out here. I only have lower division classes left.

It’s beautiful out here. The facilities are amazing. The training staff, the coaches are great. There’s nothing here they don’t have if you need it.

How are you acclimating to the altitude? Any truth to the myth of altitude training?

Because I’m never here for more than three days at a time, I’m almost getting acclimated and then we go away for four days to sea level.  And I come back and start all over again. It’s probably the same as this week, but you just get used to it.

How is the locker room and the relationship with your new teammates? Are you playing more forward or midfield?

The guys here are really friendly and I can tell there’s lots of team unity. I like it. They’re very welcoming and accepting as far as that goes.
As of now it’s been more of a forward role, but you never know. I don’t know how they specifically (want to) utilize me as of yet.

What are your thoughts on returning to San Jose?

A lot of Quakes fans have messaged me showing support and are looking forward to having me out there. They want me to come to the Ultras’ section and say hello. Quakes fans are really great fans and have been really supportive of me with everything. I’m looking forward to coming back and hopefully playing in front of them.

What are your thoughts on the game and how the Rapids match up with the young Quakes?

Omar (Cummings) and Conor (Casey) got a great little tandem up top.  Those guys will have difficulty handling Omar’s speed. He’s just so dynamic. Conor is just so good at finding himself at the right place to get goals.

We’ll see. it should be a really good matchup. I saw Steve (Beitashour) has been starting at right back and Ike (Opara) seems to be getting more comfortable at his center back role and that’s good to see.  We’ll see how they do against the veteran pair up there.