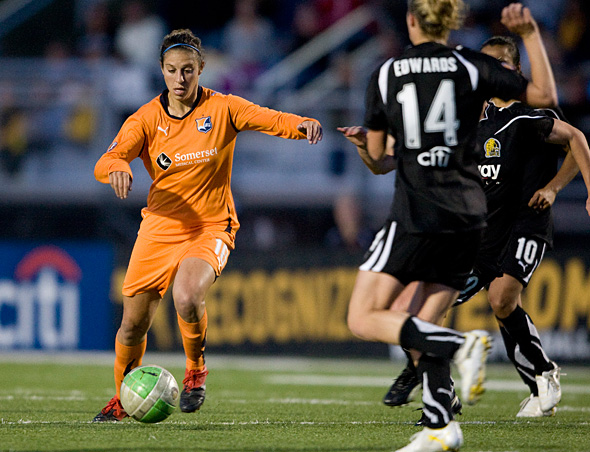 Two weeks after handily beating Sky Blue FC, FC Gold Pride looks to repeat that same feat this weekend, when they travel to Yucak Field in Piscataway, New Jersey, for a rematch with the defending WPS champions on Saturday, May 1.

Gold Pride enters the game with a two-game winning streak, which started with the Pride’s 3-1 home win against Sky Blue FC. Last weekend, the Hayward-based Women’s Professional Soccer team extended its streak to two with a 2-1 home win over the expansion Atlanta Beat, thanks to a last-minute goal by Carrie Dew.

Meanwhile, Sky Blue FC is coming off its second win of the year: a 1-0 win at Toyota Park in Bridgeview, Illinois, against the Chicago Red Stars on Sunday, April 25. It was Sky Blue FC’s second 1-0 victory over Chicago this season, with both goals coming from Tasha Kai.

Both clubs hold 2-1 records, six points and a share of first place going into the WPS Game of the Week. But Gold Pride coach Albertin Montoya isn’t putting too much stock into this game.

“I don’t think it’s anymore important than any other game,” said Montoya. “This year, every game is just as important to get three points.

“Obviously getting a win would be huge, being in first place by ourselves,” Montoya added. “It sends a message. But this game is just important as last weekend, and will be just as important next weekend against Chicago.”

Gold Pride won a scrimmage against the NCAA elite Stanford Cardinal, 5-0, on Tuesday, April 27, in preparation for the game. Montoya was hoping to play a game on a damp grass field, similar to what they’ll see in Piscataway, and that‘s what he got.

Sky Blue FC will have the home-field advantage for this meeting, but will be without a couple of its star players — midfielder Carli Lloyd, who broke her ankle in the win over Chicago last week, and regular starting keeper Jenni Branam, who has been missing all season with an injury.

“It’s a bummer. It happens,” said Sky Blue FC coach Pauliina Miettinen, whose team expects Yael Averbuch to return after sitting out a game with flu-like symptoms. “We have to play the hardest with the team that we have.”

Miettinen believes Sky Blue FC’s roster is extremely deep, and feels the players are determined to step up in the absence of Lloyd and Branam.

And the Sky Blue FC players won’t need to step up their games because of they will be without a couple regulars. The opponent across the field will be motivation itself.

“Determined minds will be on the field, with no lack in motivation,” said Miettinen. “We have something to prove to Gold Pride.”

Montoya isn’t taking anything for granted this weekend. He’ll be happy with what the Pride can get, no matter who’s on the field.

“On the road, with one point, I’d be pleased with that,” Montoya added, whose team, unlike Sky Blue FC, are all healthy and “should be in good shape to go.”

Kickoff for the game on Saturday, May 1, is set for 3 p.m. PT and can be seen on Fox Soccer Channel.