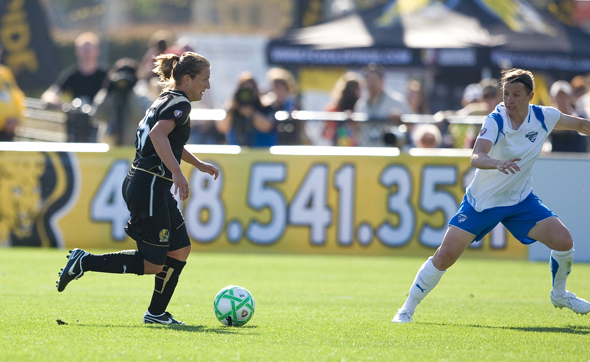 FC Gold Pride heads to the East Coast this weekend for a Friday, May 14, battle against the struggling Boston Breakers. Gold Pride enter the game on a four-game win streak while the Breakers (1-1-3) haven't been on the winning side since the WPS opening weekend.

But even with the Breakers struggling, it's not going to be easy as another one of the Pride regular starters, Kelley O'Hara, will be out of the lineup. O'Hara joins Camille Abily (fractured ankle) on the injured list.

"We have several injuries so we're going to bring Rosie Tantillo," said Gold Pride coach Albertin Montoya. "That's why we play some of those games, to see how developmental players perform."

In addition to Abily and O'Hara being out, Solveig Gulbrandsen and former Breaker Candace Chapman are questionable for the game. But this Gold Pride team is still 4-1 (12 points) on the season and in first place, three points ahead of Sky Blue FC. Coach Montoya is happy with where the team stands.

"I can't complain," said Montoya. "We've been playing quite well and getting the results."

But Boston poses a tough challenge for the high-scoring Pride with its stingy defense, so it's a game that should not be taken lightly.

"Boston is probably one of the best defenses in the league," said Montoya, whose team will most likely be playing in rainy weather come Friday. "We are going to try and do our best and see if we can at least get a point out of it."

And while Montoya raves about the Breakers defense, Boston's coach Tony DiCicco says the Gold Pride offense is something even the defensive-minded Breakers will have problems with.

"I don't think you stop the front line of Gold Pride but we have to try to slow them down a bit," said DiCicco. "They are clearly going to create chances so we have to be good in goal and also good as a defensive unit."

Gold Pride's defense isn't too shabby either. In five games, the league-leaders have allowed a league best four goals, one better than their Friday counterpart.

"Our defense is up there right now, too." said Montoya, whose team has allowed the second fewest shots on goal. "Put our defense with our attack, hopefully we can take it to them, but it‘s going to be a tough game."

Boston, despite its scoring deficiencies (four goals in five games), has a bevy of offensive talent, including Lauren Cheney and English International Kelly Smith. DiCicco feels the offense is doing good things, but is lacking finishing off chances.

"We are creating chances and the next step is to convert some of those chances into goals," DiCicco said. "We have too many good attacking players for that not to happen. We can not press however. We just have to keep getting better even if it's little steps."

"In the midfield, you have to respect Kelly Smith," said Montoya. "If Kelly Smith is on, it totally changes that team around."

Montoya feels his midfield has a quicker pace and hopes to exploit Boston's slower midfield game.

"They do a very good job defending and shifting from one side to the other," said Montoya. "We have to attack them in different ways and see what opens up."

Boston has several connections to the Gold Pride from the inaugural team, including Leslie Osborne, Liz Bogus, Tiffany Weimer and Jordan Angeli and, coupled with the reeling play, are expected to have a lot of motivation on Friday night. But Montoya believes he has some motivation for his players.

"I think teams that are looking for a win can use that as motivation," said Montoya. "Our motivation is, ‘Let's get 15 points and separate us from the rest of the pack."

Kicking off at 7:30 p.m. on Friday night, FC Gold Pride will go for that win, a fifth straight, and grab hold of three more points and a firm grasp of first in the WPS standings.