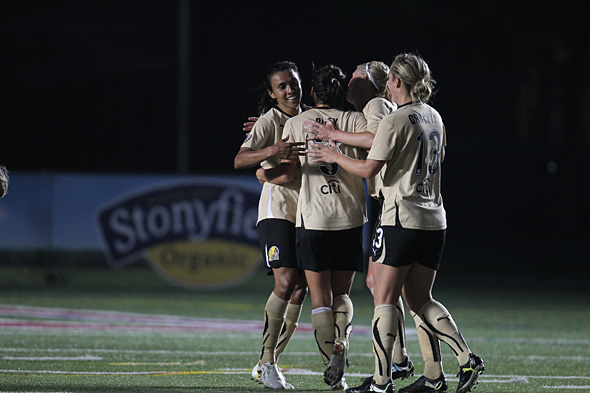 With Kelley O’Hara and Camille Abily both sidelined with injuries, Marta stepped up her game and showed the Boston Breakers why she is the four-time FIFA Player of the Year, leading her FC Gold Pride to its fifth consecutive WPS win on Friday, May 14.

Marta did all her damage in the first half, netting both of the Pride’s goals in its 2-1 road win, dazzling the 5,000-plus fans in attendance at Harvard Stadium in Cambridge, Massachusetts.

"This was a difficult game on the road because we played a very tough team in front of a great home crowd,” said Gold Pride coach Albertin Montoya. “We were fortunate enough to put two goals away."

In the 15th minute, Marta showed off her speed, collecting a through ball from Tiffeny Milbrett behind the Breakers defense and putting a shot past Breakers keeper Ashley Phillips for the early 1-0 advantage.

However, Boston was quick to counter, when English International Kelly Smith received a pass from rookie Lauren Cheney and slid it past goalkeeper Nicole Barnhart for a 1-1 game in the 22nd minute.

“Someone was on my back and I just reached for it a little and got a toe on it,” said Cheney about setting up Smith for the goal. “It's not a pretty goal; we worked for it and we got it.”

It was the first goal Barnhart had allowed in more than five halves of play. For Smith, she joined Gold Pride’s Christine Sinclair and St. Louis Athletica’s Eniola Aluko with three goals, leading the WPS.

"They came at us hard and scored a tying goal,” said Montoya, whose team would not allow much of anything to the Breakers over the next 78-plus minutes. “But our defense was excellent in the second half and prevented them from getting another one."

Marta got the eventual game winner in the 38th minute. Similar to her first goal, when Milbrett sent her through, this time Marta received a through ball from Solveig Gulbrandsen behind the Breakers defense, just beating Alex Scott, and sliding a shot past Phillips for the 2-1 lead they would not relinquish.

“It’s hard to neutralize Marta,” said Boston Breakers coach Tony DiCicco. “We said we have to be good getting in behind, so we double-teamed her on the flanks and unfortunately she got in behind us twice and beat us there.”

It was Marta’s second and third goals of the season, joining her with Sinclair, Aluko and Smith for a logjam atop the goal-scoring leader board.

FC Gold Pride sits atop the more important statistic, without any logjam. That would be the total points, with 15, which they earned with their fifth straight victory, a new WPS record, topping the defunct L.A. Sol — Marta’s former team — who achieved a four-game win streak spanning June 21 through July 5, 2009.

Despite the win, Gold Pride’s defense allowed more shots than it usually does. Gold Pride, which has allowed five goals in the 2010 season (three during the current win streak), has allowed the second fewest shots on its goal this season. On Friday night against the Breakers, the team gave up 13 shots, seven on target, forcing Barnhart to make six saves.

Offensively, the Pride has fired the most shots on goal, but against the Breakers, could only muster up eight shots at goal, six hitting the target. All stats aside, the Pride tallied the higher total in the more important category, goals.

Next up for the Pride is a week off before heading to Chicago to take on the struggling Red Stars at Toyota Park on Saturday, May 29, at 5 p.m. PT. The two sides met up in FC Gold Pride’s backyard on May 8 and the Pride handed the Red Stars a 2-0 defeat. Meanwhile, the Breakers head to New Jersey on May 29 at 7 p.m. ET to duel with WPS defending champion Sky Blue FC.