Earthquakes earn point after scoreless draw with the Revolution

Share All sharing options for: Earthquakes earn point after scoreless draw with the Revolution 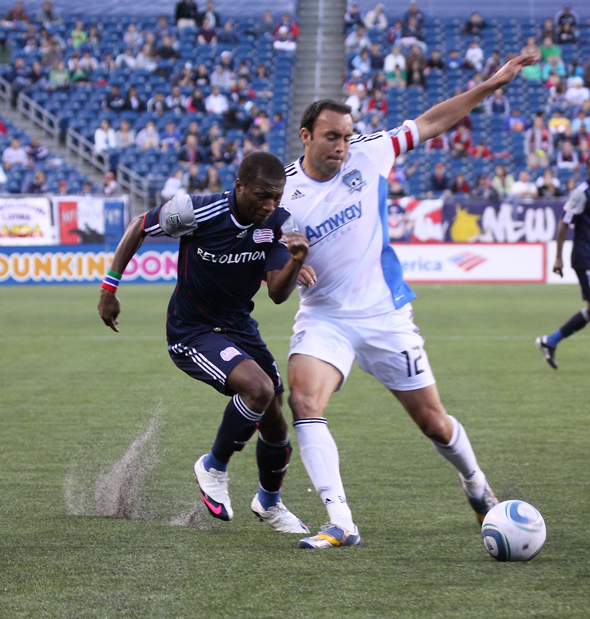 The San Jose Earthquakes withstood an energized New England Revolution team on the road Saturday night and came away with a scoreless draw. Both teams had scant quality chances on goal, but even when they did, the goalkeepers were up to the challenge. And while the Quakes may have fancied getting the win at Gillette Stadium given how banged up the Revs were entering the game, earning a point on the road must be considered a positive result.

"I thought it was an even game," said coach Frank Yallop during his postgame press conference. "We had some chances to score, but overall it was a fair result. A point on the road is always good."

Unlike in the first meeting between these teams a month ago at Buck Shaw Stadium, the Revolution were very effective in disrupting the Earthquakes possession in the midfield. Neither Andre Luiz nor Brandon McDonald was able to dictate the flow of the game for long stretches of the match. Out on the wings, Bobby Convey was too busy covering on defense against the speedy Sainey Nyassi and Marko Perovic to get better involved in the offense, while Joey Gjertsen found it difficult to find space to maneuver.

New England was coming off a stretch of four games over the last two weeks, and couldn't even rustle up enough healthy bodies to fill out their substitutes' bench. That never really mattered, as the Revolution made it clear from the opening whistle that they were not going to be pushed around in the same manner that Chivas USA dominated in a 4-0 victory at Gillette Stadium back on May 5th.

However, the Earthquakes hadn't been scored upon over their last two games -- both at Buck Shaw Stadium -- and showed little sign of being challenged by the midfielder-heavy 4-5-1 formation employed by the Revolution. Knowing that they were only required to face a lone New England striker, the Quakes defense settled in comfortably and absorbed the pressure coming from the Revs midfield.

"They were coming pretty direct at times which is pretty easy for us to defend," shared central defender Jason Hernandez. "Usually the tough times are when the dynamic runs are coming out of the midfield. For the most part when it is direct it suits us pretty well. Bobby Burling did a great job in the air and Chris Leitch and Ramiro (Corrales) did a good job of tucking in behind."

After a few minutes of pressure from the Revolution, the Earthquakes settled down to control the game over the opening ten minutes of the match. In the 4th minute, Ryan Johnson made a nice run onto a long ball from Corrales, but his header back across goal was wide of the mark.

In the 8th minute, with the Revolution defensive line playing well above their penalty area, Convey threaded a perfect through-ball toward Chris Wondolowki who dragged it toward the byline. From a tight angle, he smartly pulled the cross toward the far post, but just behind Johnson. Unable to make a good turn on the ball, he sent a low shot that was kick-saved by goalkeeper Preston Burpo and then cleared over the crossbar for a corner kick.

New England settled down over the next twenty minutes or so and tried time and again to find the cracks in the Earthquakes defensive four. Nyassi was a constant threat on the right side as he gave Corrales all he could handle. In the 20th minute, with little choice, the Quakes captain pulled down the speedy striker to prevent a breakaway.

In the 26th minute, Nyassi again finds space along the right touchline, where he gets a nice cross into the area that Hernandez can do little with but flick away. The ball landed near the feet of Chris Tierney just off the byline, but the best he can do from such a tight angle on goal is blast the ball high and wide.

The Earthquakes finally broke the long spell of Revolution possession in the 35th minute, when Wondolowski latched onto a long ball on the right wing following a good defensive effort from Gjertsen. As he dribbled toward the corner flag, he turned defender Cory Gibbs the wrong way and raced along the byline toward goal. He does his best to pick out Johnson near the far post, but a desperate clearance from Kevin Alston saved the day.

As the clock marched closer to halftime, the Revolution surged forward in search of a goal. Pressuring the Earthquakes defenders farther back then they had in the previous two matches, New England found numerous chances to cross the ball into the penalty area. However, the Quakes avoided the danger as they did just enough to clear the ball away before the Revs could get off any shots.

In the 43rd minute, goalkeeper Joe Cannon would finally get his uniform dirty when he made a spectacular diving save on a blast from Nyassi. Set up from a throw-in from Seth Sinovic that Andre Luiz could only clear to the to of the area, Nyassi picked the ball out of the air with his right boot and blasted a shot toward the upper left corner. Cannon was immediately in full flight to parry the ball wide for a corner kick.

Halftime couldn't come soon enough for San Jose, as they welcomed the respite from the New England assault. Too often in the first half, inconsistent play in the midfield allowed the Revolution time and space to bear down on the Quakes goal. Undeterred, the defense kept them at bay, but would have certainly welcomed a more even game to relieve the constant Revolution pressure.

A back-and-forth opening 15 minute stanza to the second half left both teams frustrated with the lack of offensive opportunities. From the sidelines, coach Yallop appeared visibly upset with the lack of concentration in passing and position by his charges. Even a nice sequence of possession near the 59th minute did little to suggest the Quakes were going to threaten the New England goal.

In the 61st minute, the Earthquakes received a wake-up call in the form of a wonderful long range shot from Revs midfielder Joseph Niouky that beat Cannon to his right and caromed off the post. Cannon recovered in time to save the tame follow-up from Tierney, and everyone in white and blue breathed a sigh of relief.

The game to life over the next ten minutes, with the Earthquakes finally looking like a team that had comfortably won their past two matches. In the 64th minute, a long ball from Leitch found Johnson behind the defense. He carried the ball toward the right edge of the penalty area, where goalkeeper Burpo was there to alter his path to goal. Forced toward the byline, Johnson attempted a shot that the New England goalkeeper deflected out for a corner kick. Gjertsen had a great look on goal during the ensuing possession, but Alston stepped in again the clear the ball from danger.

In the 67th minute, a long cross from Corrales to Gjertsen was redirected toward the six-yard box, where Johnson was able to apply a snap-header toward goal. Burpo again came up big against the Jamaican and Sinovic was there to clear the rebound toward midfield.

Just a minute later, the Earthquakes earned a corner kick and had numerous targets in the box ready to receive the kick from Convey. Andre Luiz flicked the ball along to Brandon McDonald, who had his shot smothered by the Revolution defense. Gjertsen tracked down the loose ball and sent it back toward the area, where Andre Luiz got a nice heel on the ball and popped it over the Revolution back line. Staying just onside, Bobby Burling controlled the ball and had just Burpo to beat. With Wondolowski just to his right, the former college striker attempted to blast the ball past the goalkeeper, but his reaction save saw the ball deflect wide of goal for a corner kick.

"I saw the play developing," said Burling. "I took it on the chest and I looked around and I was surprised by how open I was. I started licking my chops and the ball started to get really big. I just pounded it. I probably should have done a better job placing it or laying it off to Wondo."

Neither team was presented with a better chance to score over the remainder of the match, and the final whistle came soon enough on the scoreless draw. Both the Earthquakes and the Revolution may feel they deserved to get the win in this match, but sharing the points seems a justifiable result.

While San Jose was unable to find the back of the net on offense, the 0-0 result marked the third straight shutout for the Earthquakes. In fact, by all measures, the Quakes are a much improved team from their season opening 3-0 shellacking at the hands of Real Salt Lake. Confident play from all the defenders, especially Jason Hernandez in the center of that group, has lead to the Earthquakes making huge strides over their 2009 form.

"I think to come on a cross country flight and play a team with their back against the wall on a turf field and to come out with a 0-0 is a great performance for us," explained Hernandez. "We would have liked to get three points, but I am sure they would say the same thing. To leave with a point is good enough for us right now so we are happy with it."

The road trip continues with a midday match against the Seattle Sounders FC on Saturday. Just one point behind the Earthquakes in a very tight Western Conference table, the Sounders have a chance to run their home win streak against the Quakes to three games with a victory. For San Jose, the trip to the Emerald City provides a great opportunity to measure up against a tough conference opponent.