Share All sharing options for: Gold Pride alone atop WPS after 1-0 win over Sky Blue 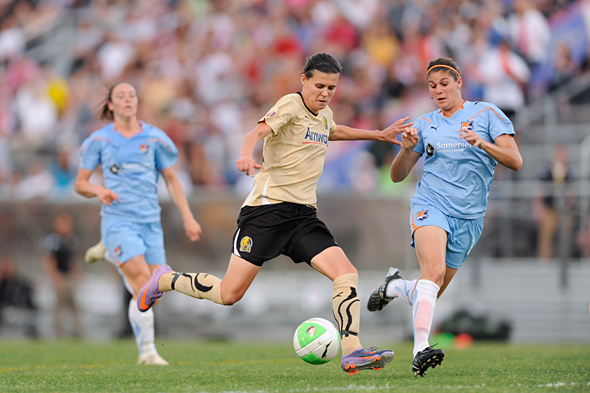 Christine Sinclair returned to the lineup for FC Gold Pride and she proved to be the difference in the team’s 1-0 win at Yurcak Field in Piscataway, New Jersey, against defending WPS champion Sky Blue FC on Saturday, May 1.

Abily sent a 38th minute free kick to the right side of the penalty area, with Carrie Dew heading the ball back across the face of goal for Sinclair. The Canada international beat her defender to the ball and buried it into the back of the net.

Sinclair, who, along with Candace Chapman, missed last week’s 2-1 home win over Atlanta while serving on their Canadian national team, was happy with the overall performance of the club.

“This was a good win for us,” said the Canadian national team striker Sinclair. “Getting the shutout was huge. As a forward, it’s always nice to score, but most of the credit for our win today should go to our defense for holding off a tough Sky Blue attack.”

Sky Blue didn’t have many quality chances on net, leaving Gold Pride keeper Nicole Barnhart with little to do. The best chance came the WPS defending champions got was in the 13th minute, when Kacey White took a shot at net that fooled Barnhart, but struck the crossbar and stayed out.

Gold Pride’s backline of co-captain Rachel Buehler, Chapman, Carrie Dew and Becky Edwards was strong, keeping the Tasha Kai-less Sky Blue FC off the scoreboard for the team’s first shutout of the season. Coach Albertin Montoya was extremely pleased with the first-half execution.

“I thought it was a great performance, we gutted it out and found a way to win," said Montoya. "We were outstanding at creating chances and being defensively organized. It was one of the best first halves of soccer I've ever seen this team play."

In the second half, the Pride and Sky Blue FC played a more physical brand of soccer, which favored the home club. As pleased as Montoya was with his team’s first-half, so was Sky Blue FC coach Pauliina Miettinen with her club’s second half.

"We created many good chances in the second half,” Miettinen said. “I think it was the best second half effort that we've had all season."

In Sky Blue FC’s 3-1 loss to Gold Pride in week two on the road, the Pride was able to get behind the defense several times. This week, the defense for Sky Blue FC was a lot tighter.

"They put the ball over our heads many times when we played two weeks ago,” said Miettinen. “I think we were able to avoid that for the most part tonight."

But the Sky Blue FC efforts were all for not, as they couldn’t capitalize on any of their second-half opportunities, falling to 2-2 on the season. Meanwhile, the Pride upped its record to 3-1, taking sole possession of first in the WPS with nine points.

Montoya is happy with the position of the team thus far, but realizes the long road they have in order to be get to the ultimate goal of winning a championship.

"We just want to focus on getting better as a team in order to win a championship," said Montoya. "This team has shown tremendous talent and I believe we have the potential to win it all. To do this, we need to continue improving week- to-week because at the same time, every other team will be improving, too."

Next week’s challenge for the Pride is at home against the Chicago Red Stars, 7 p.m. at Castro Valley High School Athletic Stadium on Saturday, May 8.