The PSA Los Gatos Storm senior team will have a golden opportunity to advance into the Lamar Hunt U.S. Open Cup tournament this Saturday night in San Jose.

While the San Jose Earthquakes long ago crashed out of qualifying for the 2010 Lamar Hunt U.S. Open Cup tournament, one local entry still has a golden opportunity to make the final field of 40 teams. The PSA Los Gatos Storm, formerly the San Jose Frogs of the USL's Premier Developmental League (PDL), will join the other 39 qualifiers if they can defeat North Bay rivals the Sonoma County Sol in a winner-take-all game at 7 p.m. this Saturday night at PAL Stadium in San Jose.

"We're very excited for the chance to be in the U.S. Open Cup tournament," said team General Manager Aaron Castro. "We hope to make a good showing for club soccer in this match."

What is unusual about this story is not the game itself, but that the Los Gatos Storm are even entered into the tournament qualifier to begin with. In the 96 years the annual tournament has been contested, a team from the U.S. Club Soccer organization -- the current affiliation for the Storm -- has never participated. Instead, the United States Soccer Federation (USSF), the governing body behind the tournament, selected amateur teams from the more recognizable PDL and U.S. Adult Soccer Association (USASA) organizations through a series of regional qualifying tournaments.

"We participated in the U.S. Open Cup tournament when we were the San Jose Frogs, and we wanted to continue playing as the Storm," said Castro. "However, since we are currently not a member of the NPSL (National Premier Soccer League, affiliate of the USASA) or PDL, we knew the traditional method for qualifying would be different. We thought it would be simple to enter as a US Club Soccer team, but it wasn't."

Back in April, Castro contacted the USSF about joining the already established Region IV qualifying tournament to be held at the end of May among teams from the NPSL and PDL. However, he was told that as not possible, and denied his request.

"I persisted in trying to get my team into the qualifying with the other Region IV organizations," explained Castro. "Even though the NorCal Premier League (of which the Storm were a member team) was a recognized soccer organization and a sanctioned part of the USSF, there was not a mechanism for their teams to enter this tournament."

Perhaps this initial refusal would be enough to deter most teams from their efforts, but Castro was not going to give up that easy. He knew that all USSF affiliated teams have the right to enter the U.S. Open Cup tournament, and he was determined to see the Storm get their chance to play. A series of e-mails and phone calls to the USSF went largely ignored, until he finally received a reply from an official in the registration department that told him that he would look into the matter.

"Just about the time when I didn't think anything was going to happen, I get a call out of the blue from the U.S. Open Cup competition secretary asking me to explain our application," Castro shared. "I let him know a little about our team and our league situation. I told him we had players that were former professionals and current college stars, and that we were serious about playing for the Cup.

"He said he would make some calls, and it seems like the next thing you know, in what seemed like the eleventh hour, I got an e-mail from the USSF outlining what they were going to do for us. We will have a one game play-in match against the 2009 NPSL champion Sonoma County Sol, and the winner will advance to the tournament proper." 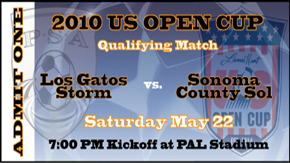 This unusual decision from the USSF also had a profound effect on the Storm's play-in opponent. Instead of entering the Region IV qualifying tournament along with the other NPSL representatives, the Sol could now qualify with one victory. In other words, they have been rewarded for their 2009 success with a simple path to the final 40.

Meanwhile, the Los Gatos Storm were given a huge advantage over the other amateur clubs trying to complete their qualification by needing to play just one game. With no other system in place, and with little time to organize something new for all potentially interested U.S. Club Soccer teams, the USSF did what they thought was best.

"The USSF admitted that there wasn't a mechanism to get a team like us into the tournament," said Castro. "Apparently this is something they have wanted to do for some time, but until now the situation had not presented itself."

When the announcement was made earlier this month, some clubs criticized the USSF for their decision to let the Storm enter into qualifying. There were complaints that the one-game format was unfair to the other amateur clubs that required a much lengthier path to the U.S. Open Cup. With the highest finishing amateur club in the tournament winning $10,000 in prize money, the Storm (and the Sol) would have the shortest path to that potential award.

"We were always willing to go through the same process the other PDL and NPSL teams were required to do," explained Castro. "But we were not given that option because of procedural reasons. I do feel this was a fair decision by the USSF. Right now there are a lot of teams like ours that are prevented from getting into the tournament. If we can be an example of how to get in, and force the USSF to create a procedure so that more club teams can participate, then I think it is good for everybody."

Castro understands the frustrations of clubs that have not found a way into the tournament. He especially shared concern for those teams that have a long history of playing soccer in their communities, and have never had the chance that the Storm now have.

"I hope other teams follow our path and get to compete in future years," he said.

With decision announced by the USSF, the next step was to schedule the game with the Sonoma County Sol. After discussions between the two sides, it was announced earlier this week that the play-in game would be held this Saturday evening at PAL Stadium in San Jose. Admission is free and the start time is 7 p.m. with gates opening two hours earlier for pregame festivities.

On paper, the match-up would seem to favor the defending NPSL Champion Sonoma Sol over the club team from Los Gatos. In fact, back in April the Sol visited the Storm in Los Gatos for a friendly and walked away with a 3-0 victory. However, a closer understanding of the Storm suggests this game may be more closely contested than perhaps the USSF envisioned when they set up this qualifier.

The roster of the Los Gatos Storm is a mixture of former San Jose Frogs and current local college players. The senior team currently competes in the NorCal Premier League 23-and-under division, so is made up entirely of youthful players. However, they have been training hard since their season began, and even scheduled a couple scrimmages with the Earthquakes as a way to gain experience.

The frontrunner to the Storm, the San Jose Frogs, came onto the local soccer scene in 2005 when the original San Jose Earthquakes left the city for Houston. The team had three successful seasons during those subsequent years in the lower divisions of the USL: first in the NPSL and later in the PDL. However, the team failed to garner continued attention in San Jose when the new Quakes team debuted in 2008. Later that year, they dropped from the USL and reemerged as the PSA Los Gatos Storm.

Going back to their days as the Frogs, the Storm faced the Sonoma Sol on numerous occasions. That familiarity should help on Saturday, but Castro was quick to point out that the players are different this time around. Instead, a new group of guys will need to step up to the challenge if the Storm are to complete their path into the U.S. Open Cup tournament.

"Our boys are very excited," said Castro. "The training sessions have been well attended and been full of energy. Everyone with the team knows the importance of this game for us and for club soccer. We want to go out there and make a good standing and not be embarrassed. We have guys that have played at this level in the past, and they are helping the younger guys to get the right focus and be ready for a good opponent."

Nothing is more exciting than a win-or-go-home game, and Saturday night should be a fun experience for those looking to see some top amateur Bay Area soccer talent battle it out with a prestigious entry in the 97th Lamar Hunt U.S. Open Cup tournament on the line.