Share All sharing options for: FC Gold Pride travels to Chicago to take on Red Stars 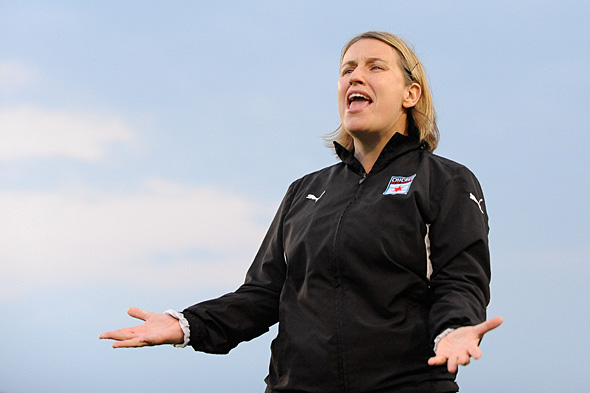 Women’s Professional Soccer is coming off a league-wide bye week, and it couldn’t have come at a better time for FC Gold Pride. Beginning with a Saturday, May 29, road bout against the Chicago Red Stars, the Pride have a grueling stretch of games over a two-week span.

“The great thing about the break is it allows some of the players to heal up with certain injuries they had,” said FC Gold Pride coach Albertin Montoya. “We had that break come at a great time. It definitely helped some players heal, and I think they needed a little mental break, too, because they‘ve been working that hard.”

After the Pride play the Red Stars at Toyota Park in Bridgeview, Illinois, on Saturday at 5 p.m. PT, they return home for a Saturday, June 5, match-up with the surging Washington Freedom before going on the road for two games in four days, starting Wednesday, June 5, at St. Louis Athletica, and finishing up Sunday, June 13, at Philadelphia Independence.

“We’re approaching a tough spell here. These next four games are crucial, with three very difficult road games coming ahead,” said Montoya. “We’re going to keep treating it like we have all season: one game at a time.”

First up is the road game against the Red Stars, who recently relieved Emma Hayes of her coaching duties after getting off to a 1-4-1 start.

“I’m just extremely sad to see her go,” said Montoya. “She’s one of my closest friends in this league, and I have a lot of respect for her as a person and as a coach, and it’s sad to see her let go.”

With the firing of Hayes, it brings on a new challenge for Montoya as he prepares for the Red Stars, a team the Pride beat 2-0 at home on May 8.

“We can’t look at their past games and formations, because you just don’t know what’s going to come at you,” Montoya said. “We have to be ready for the unexpected, so we got to be sure we are prepared for whatever Chicago is going to put out there.”

Not only do the Pride have a target on their back as being the top team in the league, currently riding a five-game win streak on top of its first place standing, Montoya expects the Red Stars to come out with more energy in response to the change in coaches.

“I’ve been there as a player, and anytime a new coach comes in you feel you have to prove yourself,” said Montoya. “You actually workout much harder, every player is trying to make the starting lineup so I’m sure they’re having a great week of practice.

“We just have to be prepared for that,” Montoya continued. “We’re also in first place, so we have a target on our back, and teams are going to be more motivated when they play us.”

Playing on the bigger field at Toyota Park, Montoya thinks his team will be ready to dominate come Saturday night.

“They have a nice large field that will help us keep possession,” said Montoya. “It will create more space for Marta, who will be more dangerous (on the bigger field) and the same with Kelley (O’Hara) and (Christine) Sinclair when they have space.”

O’Hara, who didn’t make the Pride’s last road trip due to a deep heel bruise, will be in the lineup against Chicago, helping her club create what Montoya feels will be a “different type of game” than what the Red Stars saw from the Pride at Castro Valley Athletic Stadium. Saturday’s kickoff is at 7 p.m. Chicago time, 5 p.m. Bay Area time.