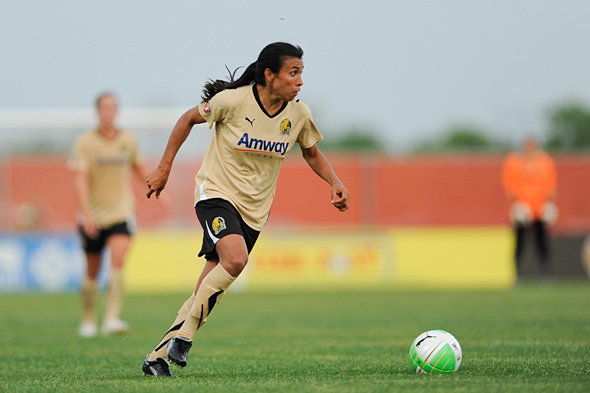 Marta and her FC Gold Pride teammates will look for their fourth win in a row Saturday night in Castro Valley as the Chicago Red Stars come to town. Photo: Howard C. Smith, isiphotos.com

FC Gold Pride is red hot. Heading into the Saturday, May 8, game against the Chicago Red Stars, the Pride have won three straight and look to extend its lead in the WPS standings.

At 3-1, Gold Pride sits in first place with nine points, one point ahead of Philadelphia Independence, and is 2-0 at its temporary home field at Castro Valley High School Athletic Stadium. But the Pride can’t sleep on the Red Stars, which are loaded with offensive talent, and just beat the previously-unbeaten Breakers in Boston last weekend.

Chicago’s offensive firepower is something that Gold Pride coach Albertin Montoya is focused on preventing from breaking out.

“Everyone talks about how dangerous we are up top,” Montoya said, “but I think Chicago might be even more dangerous. They have Cristiane, (Karen) Carney, (Megan) Rapinoe and Casey Nogueira. Those four players are outstanding in the attacking half and create problems for all teams.

“They do a good job of spreading them on the field,” Montoya continued. “We’ll definitely have to keep an eye on them. They are probably the most dangerous team we have faced so far.”

But even with the threats Chicago has on its roster, coach Montoya believes if the Pride play their game, the Red Stars will have problems of their own.

“We watched Chicago play, and we know they are going to be dangerous,” said Montoya. “We’d like to think if we play our game, they have to adjust to that.”

That offensive game plan by the Pride is to put as much pressure on the Red Stars backline as possible. Christine Sinclair is a striker that could present match-up problems for Chicago.

“I think she is probably the most dangerous finisher in the box,” said Montoya of Sinclair. “She can score in many different ways, and because of the players we have surrounding her, she gets in good positions to finish things off.”

Chicago, according to coach Emma Hayes, were winless in its first three games (0-2-1) despite outplaying the opponent each time. Last weekend, the Red Stars got into the win column with a 2-0 win over Boston and looks to keep its momentum.

“Things are coming together for the team. Bay Area are a great team and Albertin is a good friend, so there is no surprise that they are doing well,” said Hayes. “Our confidence is high, but we will have to work hard if we want to get a result.”

Hayes feels there is no one person that will help the Red Stars go into the Pride’s home field and come away with a win. Instead, it’s going to be a whole team acting as one.

“We have to be organized and continue to work hard from the front first if we are going to limit their chances,” Hayes said. “The collective will is important, and working hard for each other as we have been doing will give us the best chance possible.”

Montoya continues to acknowledge the team’s opponents week-in and week-out, but still believes the real challenges are improving his team and continuing to get better as the season moves forward.

“We need to keep getting better every week, because all the other teams are doing the same,” said Montoya. “There are a lot of things we need to do better … to make sure we’re playing our best when playoff time comes.”

Two heady players -- Becky Edwards and Carrie Dew -- have helped with the team‘s resurgence. Since they have been inserted in the lineup after the opening weekend loss, the team has gone 3-0.

“It’s a combination of that,” Montoya added, “and players coming together and playing well.”

Edwards, Dew and crew hope to make it four in a row on Saturday night, kicking off at 7 p.m.