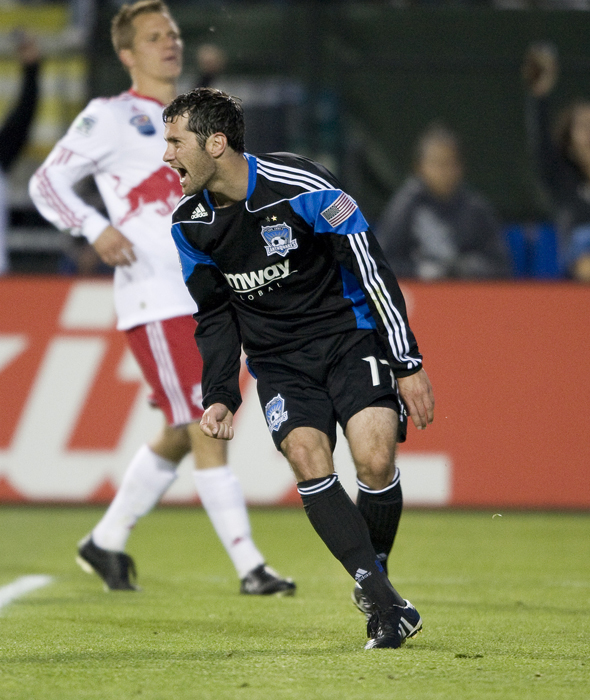 Joey Gjertsen celebrates his goal in the second half to give the Earthquakes a 2-0 lead. The Quakes went on to post a 4-0 victory over the New York Red Bulls. Photo: Michael Pimentel, isiphotos.com

Chris Wondolowski stayed red hot, scoring in his fourth straight game, joined by Ryan Johnson, Joey Gjertsen and Bobby Burling, who all netted their first goals of the season.

"A great home win for us," coach Frank Yallop said. "Obviously, the red card to them makes a difference in the match, but sometimes you don't tend to play well when that happens. We probably played our best game (this year), just in ball movement and the desire to win it back. It was terrific, a fantastic performance by us."

Joe Cannon had a comfortable night in goal, and wasn't called on to do much as the energetic Earthquakes defense earned their second straight clean sheet, and third in a row at home.

"Tonight is exactly how I want us to play," Yallop said. "We've got to be the aggressor, we've got to be on the front foot. The Earthquakes of old would do that, and I think we're getting to a point now where the team is starting to believe that they can dominate teams here. I think we made it difficult for New York. Every time they had the ball in our half we squeezed them and pressed them and made it difficult. Good things happen when you do that."

"We scored on a set play, (and played) good football to score two of the goals, so it's encouraging," Yallop said.

Yallop does not like to change the Earthquakes' line up coming off a win, so it was no surprise when he started the game with the same 11 that ground out last Saturday's 1-0 result over Colorado.

New York, coming into the night riding a three-game winning streak, made one change in their side from last weekend: with Carl Robinson nursing a swelling right knee, Tony Tchani, the second overall pick in the 2010 MLS Superdraft stepped into the holding midfield role.

On a cool, clear night, both teams struggled to keep their footing on a slick field.

New York quickly found themselves down to 10 men after Luke Sassano's sliding, studs up challenge on Bobby Convey earned him a straight red card in the 13th minute, but for the next half-hour New York created almost as many chances as San Jose.

When Chris Wondolowski caught NY defender Tim Ream in possession in the 23rd minute, his pressure led to Ryan Johnson stealing the ball at the top of the arc with a clear path to goal. But Johnson's low shot was smothered by Red Bulls net minder Bouna Coundoul.

Another chance went begging five minutes later when a corner kick fell to Andre Luiz 8 yards from goal. Andre Luiz didn't get much on the shot, and was easily denied.

New York's offense was more opportunistic, if not more effective. At the half hour mark, Joel Lindpere lifted a free kick for Tony Tchani to run onto near the right post, but Earthquakes goalkeeper Joe Cannon had the angle covered.

In the 35thminute, when Jason Hernandez slipped trying to make a pass, Juan Pablo Angel quickly played the ball forward to Salou Ibrahim, who fed Lindpere racing down the left side. Lindpere's shot from 15 yards sailed wide left.

San Jose finally broke through a minute before intermission, on a quick counter attack. Wondolowski fed the ball up the left side to Bobby Convey, who slipped as he curled a long ball to Ryan Johnson racing in on goal. Johnson slid a shot from the penalty spot just inside the left post, the first goal of the season for last year's team-leading scorer.

Once San Jose took the lead, the game was decidedly one-sided. The Earthquakes doubled their lead early in the second half, after Ryan Johnson found Joey Gjertsen near the top left corner of the penalty area. One-on-one against Ream, Gjertsen cut inside and fired home a right-footed shot from 15 yards, the first goal of his MLS career.

New York brought on some fresh legs — Jeremy Hall for Salou Ibrahim in the 58th minute, Danleigh Borman for Roy Miller in the 67th, and Sinisa Ubiparipovic for Tchani in the 75th, but all they could do was chase as San Jose played keep away.

Gjertsen almost bagged another goal at the hour mark, collecting a poor clearance off a corner kick and letting fly from 30 yards, missing wide left.

Ryan Johnson's bid for a brace in the 74th minute, a left footed blast from the top of the arc, forced Coundoul to make a diving save.

Goal number three for San Jose came in the 77th minute after a nice bit of build up, with Convey feeding Ramiro Corrales near the left side end line, then Corrales rolling it across the face of goal for Wondolowski to tap it in.

With five minutes left on the clock, Yallop pulled both Wondolowski and Johnson, giving them a chance to drink in the cheers of an appreciative crowd as Scott Sealy and Cornell Glen took their places up front.

On the restart, a Bobby Convey corner kick found Bobby Burling making a run at the far post, and Burling buried his header from close range to make it 4-0. It was Convey's third assist of the night and fifth of the year to put him among the league leaders. For the young centerback, it was his first ever goal in MLS.

"Assists are in the stats, but (Bobby Convey's) general play was excellent tonight," Yallop said. "His defending, his work rate, and his use of the ball was just fantastic. I just said to him, he's right back to where he was 3 or 4 years ago playing in England. He feels good now. We expect good things from Bobby all season."

San Jose almost netted a fifth goal before it was all over as Cornell Glen rocked the right post from 15 yards in the 88th minute.

Critics may say these last three home games, all wins, have come against weak opposition: a New York team reduced to 10 men, a New England side without Shalrie Joseph, and Colorado, well, being Colorado. But these are games you're supposed to win if you're expecting to be in the playoffs, and the Earthquakes have done just that.

Next up: a road trip to New England to play the Revolution next Saturday.