Share All sharing options for: It's four in a row for FCGP after 2-0 win over Chicago 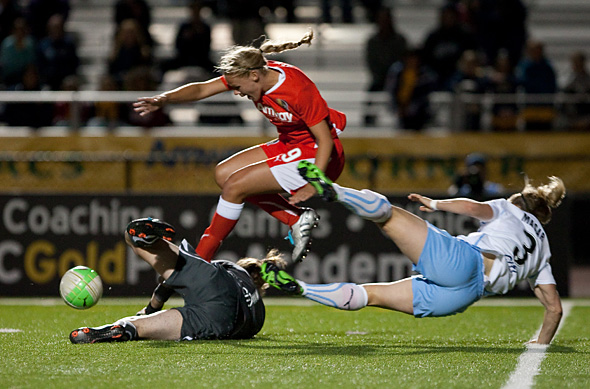 “It feels good,” said FC Gold Pride coach Albertin Montoya about the team‘s streak. “We deserve it the way we’ve been playing.”

Gold Pride (4-1), according to Montoya, picked up its defensive play, and created more chances this week en route to the victory.

Late in the first half, Tiffeny Milbrett took advantage of one of those chances, scoring a goal in the 44th minute, making up for a missed penalty kick earlier in the half.

Gold Pride midfielder Carrie Dew targeting a streaking Ali Riley, who took the long chip ball and volleyed it to Milbrett, who did the rest, putting it by Red Stars keeper Jillian Loyden for a 1-0 lead.

“I was able to get a great strike at it but it went off the crossbar,” said the Pride’s eldest player at 37 years old. “It bounced right to me and I tried to take a volley shot and I hit that well.

“Being able to even up after missing the PK,” added Milbrett, “I was very happy to get one in for the team.”

Milbrett’s PK chance came when, in the 26th minute, Christine Sinclair fed a through ball on the ground to Marta, who quickly slid the ball to O’Hara, whose well-timed run had taken her behind Chicago's defenders and into the box. Red Stars defender Ifeoma Dieke made a desperate attempt at a tackle, but her foul earned a penalty kick for the home side and a red card for herself.

Loyden got the best of Milbrett in their first tangle against each other, guessing right and gobbling up the fluttering shot.

“I don’t think I hit it with the best pace,” said Milbrett. “Give (Loyden) credit, and I’ll learn from it and be able to strike it better next time.”

Chicago came out in the second half with a quick surge, and  nearly tied the game in the 47th minute when Ella Masar caught the Pride napping — watching Sollveig Gulbrandsen laying on the turf after a hard challenge for a head ball — and got behind the defense.

With Rachel Buehler and Dew tracking her down, Masar took a shot just inside the box but Pride keeper Nicole Barnhart kicked it away, keeping the Pride up 1-0.

"(Masar) ended up taking a bit of a longer touch on it and I was able to close down the space a little bit," said Barnhart. "I was able to just get my foot on it. To get that save kind of picked up our team."

“That save was just as important as both goals,” said Montoya. “It’s difficult when a keeper doesn’t have to do much all game long and all of a sudden make a play like that. My hat goes off to her — she was outstanding.”

After tiring the Red Stars throughout most of the second half, the Pride were able to double its lead on Kelley O’Hara’s first WPS goal in the 79th minute.

Marta collected the ball at the midfield stripe and played a 20-yard ball to O’Hara’s feet, who touched it back to second-half substitute Kim Yokers. Yokers one-touched the ball into open space where O’Hara ran onto it and buried it past Loyden.

“(Yokers) played it through the two defenders and I ran onto it,” said O’Hara. “I took a deep breath and had a lot of time to compose myself, and I picked out the corner.”

O’Hara’s goal all but ensured victory for the Pride.

“As a forward, you always want to score goals,” she said. “It feels great. And I’m just excited we’re undefeated at home still. It’s a good night.”

Gold Pride’s win — which gave them 12 points on the season — matches their win total from 2009 and, coupled with the Philadelphia Independence loss to Athletica in St. Louis, put the Pride in a comfortable four-point lead over both Philly and St. Louis. (Sky Blue FC, with a win over Atlanta on Sunday, can jump into second place, a point ahead of Independence and Athletica.)

“We don’t really worry about the other teams and what they’re doing until we play them,” said Milbrett. “But it feels good. We have as many wins as we did last season and the tides are turning. We’re a team coming together.”

Next up for the Pride is a Friday night road game against the Breakers in Boston. Kickoff is set for 7 p.m. ET, with the Pride looking to extend their team record with a fifth win in a row.

“Boston’s defensive line is one of the best in this league,” said Montoya. “We’re going to have to break them down with our possession and then find our openings and take advantage of them.

“They’re going to be difficult to break down,” Montoya added. “We’ll have to find a way.”