Share All sharing options for: Pride break down Breakers for first Pioneer win 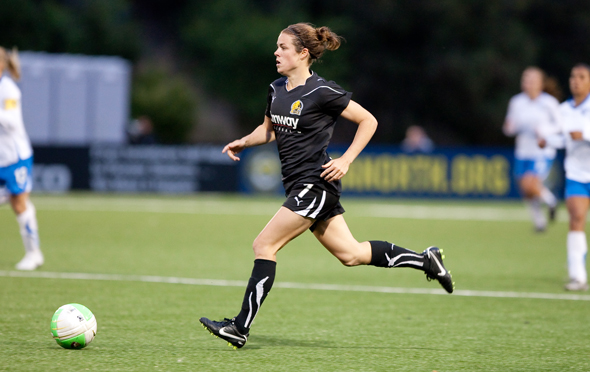 FC Gold Pride opened up their new stadium on the campus of CSU East Bay with a 1-0 victory over the Boston Breakers courtesy of a Kelley O'Hara first half goal. Photo: Kelley L. Cox, isiphotos.com

In the true home opener for the Gold Pride at Pioneer Stadium on the campus of Cal State University-East Bay in Hayward, the lone West Coast WPS team was able to defeat the WPS' eastern most team, the Boston Breakers, 1-0, to remain unbeaten -- overall, including a 3-0-1 record at Castro Valley High -- at home.

Gold Pride (7-2-1, 22 points) extended its lead in first to five points over second-place Philadelphia Independence (5-2-2, 17 points) with the win, while Boston (1-4-4, 7 points) is reeling, dropping its second in a row, while stretching its winless streak to eight games.

Here is the summary by half of the game.

First half:
Kristine Lilly beat an FC GP offside trap in the fifth minute and was one on one with FC Gold Pride keeper Nicole Barnhart but was a bit too unselfish, electing to square a pass to Lindsay Tarpley but Kandace Wilson stepped in to clear the ball.

Four minutes later, Lauren Cheney got behind the defense and went for goal, but missed wide of the goal, keeping the it scoreless in the ninth minute. Boston's Fabiana drew a foul in the 11th minute just outside the Gold Pride box for the best chance of the game.

Lilly took the free kick but pounded the five-man wall of the Pride, ricocheting right back to Lilly who slammed a shot off the crossbar. A Cheney header off the rebound went high and out for a goal kick.

Gold Pride finally made way into the Breakers third of the field in the 15th minute. Kelley O'Hara and Shannon Boxx teamed up for a give and go, freeing up O'Hara on the right wing. O'Hara crossed it to Christine Sinclair who put her body into it, but the ball trickled wide.

On the Gold Pride's next run down the field in the 17th minute, Carrie Dew sent a ball in to the top of the box, targeting Boxx. Boxx, looking at the ball the whole way through, leaped to head it at goal, but Boston's keeper Alyssa Naeher came out of her goal to punch the ball away, not before the two collided.

Boxx was not hurt in the collision and remained in the game; Naeher stayed in for about 10 minutes before suffering the effects of the collision and was taken out in the 30th minute for regular starter Ashley Phillips.

Gold Pride began to get their feet underneath themselves and had its best chance in the 21st minute when Marta lofted a cross that Sinclair headed down at goal, but Naeher gobbled it up. And one minute later, O'Hara sent in a cross for Marta, who headed it, but was blocked; the rebound off Marta's header rolled to Becky Edwards who one-timed a shot that flew over the bar.

After back-and-forth play for 15 minutes, the Pride notched the first goal of the game, courtesy of its only WPS 2010 All-Star Game reserve.

Ali Riley took an errant Breakers pass and one-touched it to O'Hara, who quickly turned to goal. O'Hara passed it to Sinclair who was posting up at the top of the Breakers box. In one touch, Sinclair played a square ball back to O'Hara who weaved through three Breakers defenders before slipping a shot past Phillips for a 1-0 lead in the 37th minute.

Gold Pride took its 1-0 lead into the half, controlling most of the play in the latter stages of the half before heading into the locker room.

Second half:
Boston came out of the locker room looking to equalize the match and peppered the Pride goal with shots and crosses, including a Lilly cross that was snagged by Barnhart, but not after Lauren Cheney laid out and nearly made a remarkable diving header for a goal in the 48th minute.

Barnhart was in a collision of her own in the 53rd minute. Boston sent a cross into the center of the box that Cheney leaped up to head home, but Barnhart punched it away, and the two collided, with Barnhart taking the brunt of the pain, although she remained in the game.

Boston continued its pressure on the FC Gold Pride in the 57th minute but Barnhart showed she was fully recovered from the collision when she cleared a loose ball out of the six-yard box on a Breakers corner.

Marta, who was shut down most of the night, got her best chance in the 60th minute for the Pride when she got behind the defense. However, with Stephanie Cox tracking back, breathing down her neck, Marta's shot at goal had no force, and was stopped with ease.

Boston was inches away from tying the game up in the 70th minute, but as has been the case for most its season, they lacked the finishing touch. Barnhart misplayed a Fabiana cross that bounced to Cheney's head, who aimed for goal, but hit the crossbar. On the rebound, Candace Chapman, who was everywhere on the wide field at Pioneer Stadium, cleared the ball out of the box before the Pride went on a counter attack.

In the 74th minute, Boston nearly cost itself a goal when WPS All-Star starter Amy LePeilbet attempted to play the ball back to her keeper but hit it too soft and Sinclair got to the 50-50 ball before Phillips and had a go at goal, but was denied.

Tiffeny Milbrett got into the action in the 75th minute, taking a well-switched ball by O'Hara and trying to flick it over Phillips, but the Breakers keeper was up to the task, stopping the shot.

Boston's chances came far and few between as the second half grew older, but had one last effort in the 89th minute when Fabiana sent a cross into the six-yard box that Barnhart snatched before Cheney could get a head on the ball.