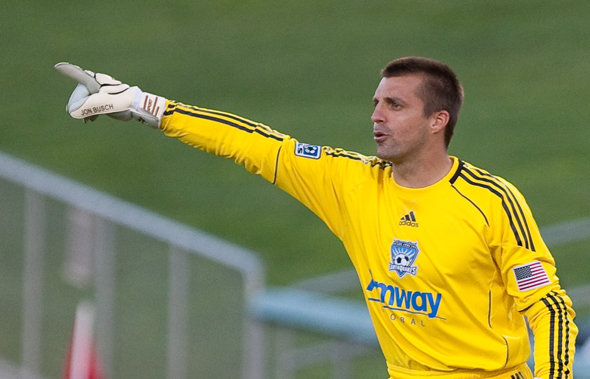 The San Jose Earthquakes returned to action against Real Salt Lake Friday night shutting down the MLS Cup champions for a scoreless draw. Goalkeeper Jon Busch, making his first league start of the season, earned the clean sheet with some fine saves and with the support of a retooled back four. While the Quakes did earn a point on the road, the result does extend their winless streak to four games.

Having watched his team leak in seven goals in the three games before their 20 day World Cup break, coach Frank Yallop made a couple key changes to his lineup for the trip to Utah. Looking for size over experience in the center of his defense, Jason Hernandez was moved to right back, with Bobby Burling and rookie Ike Opara getting the start in center. The biggest switch came between the posts, as regular season starter Joe Cannon dropped to the bench in favor of Jon Busch.

"I just did my job, my job is to make saves and catch crosses," said Busch. "Credit to the guys in front of me, they did a great job. Jason (Hernandez), Bobby (Burling), Ike (Opara) and Rams (Ramiro Corrales) on the left did a great job of blocking shots and getting their bodies in the way. They made it kind of easy for me because I didn't have to see too much."

Facing an opponent that was riding a 16-game unbeaten streak at the friendly confines of Rio Tinto Stadium, the Quakes knew they needed to play a complete game on defense if they were to return home with any positive result. Brandon McDonald continued his role at defensive midfielder and was joined by the newest member of the Earthquakes, Sam Cronin. More of a two-way midfielder than the injured Andre Luiz -- but certainly lacking the Brazilian's composure with the ball -- Cronin comported himself very well on his Quakes debut.

San Jose had already lost twice to Real Salt Lake this season, the first time in a disappointing 3-0 loss to open the MLS season and the second in a penalty kicks loss in a U.S. Open Cup qualifier. Would the third time be the charm for the Quakes? Busch had looked good in the USOC loss to RSL, so it came as less of a surprise to see him get the start over Cannon. Besides, coming off the tough three game winless stretch and not using the 2008 MLS Goalkeeper of the Year as a catalyst off the bench would have made no sense. Coach Yallop has professed that his starting lineup decisions are based on quality and current performance, and it was clear that Cannon could use a break. On Friday night, Yallop's goalkeeper choice proved to be spot on.

"Jon is obviously a terrific goalkeeper and I thought he made some big saves tonight," commented Yallop during his post-game press conference. "I think the whole team worked hard to earn the clean sheet. I'm very, very happy with the way we played, having three weeks off, we could have won it in the end, but we are happy with the result."

The inclusion of Cronin, a second year player that was the 2nd overall pick in the MLS draft by TFC in 2009, seemed somewhat surprising given that he had just joined the team earlier in the week. However, his practice sessions went very well, and Cronin has proved with his play in his rookie season that he could provide a solid contribution in central midfield. Quakes rookie Brad Ring looked prepared to be his back-up on the night, but Cronin was able to go the full 90 minutes at Rio Tinto.

"I thought we did ok," said Cronin after the game. "Obviously playing at Salt Lake, it's definitely one of the tougher games in a season and to come out with a draw is not a bad first game for me. I was happy to be out there and be able to get used to playing with the guys. You can't replicate a game at training, so it was important for me to get 90 minutes under my belt, so I'm very happy with that. We were organized and created some good chances. Overall we are pretty pleased."

The Earthquakes fine defensive form allowed them to play their preferred plan of creating offensive chances through well orchestrated forays on the wings. Bobby Convey was again the outfield player of the match for San Jose, as his possession and passing in the attacking third kept the Salt Lake defenders busy. Though the team had eight of their 14 shots on target, none was better than a late Cornell Glen effort that came courtesy of a perfect feed from Convey. If not for the heroic efforts of RSL goalkeeper Nick Rimando, the Quakes could have returned to the Bay Area with all three points.

Another fine effort on the offensive side came from little used midfielder Javier Robles, who entered the game as a late substitute for forward Chris Wondolowski. Robles has been relegated to the bench sense coming out of the season opener at halftime, and has occasionally been left off the final 18 as well. With little spark coming from Wondolowski and fellow starter Ryan Johnson, Robles was given the opportunity to prove to Yallop that he deserved more playing time.

Showing more possession ability than Johnson had throughout the first half, Robles helped the Quakes sustain their offense beyond the halfway line in his 20 minutes of action. He nearly broke the scoreless tie with a long range dipping effort that Rimando just touched over the crossbar. Even at altitude, Robles showed what can be done with the now infamous adidas Jabulani ball if you take the time to strike the ball correctly. Take note World Cup players, you don't need to smash the ball toward net to be effective.

As the game approached stoppage time, Robles again garnered possession and raced into the RSL zone. He was savagely upended 40 yards from goal, but the referee waved play on instead of awarding the Quakes a deserved free kick. The minutes ticked down and the game ended scoreless. Robles, flashing some of the shot making ability and technical skill he showed in the preseason, made a good impression in his role as a late game substitute.

Most impressive on the night was witnessing the return of the Earthquakes fine defensive form that had abandoned them earlier this month. Keeping an offensive minded team like Real Salt Lake off the scoresheet in their home stadium is a great achievement. The experiment of playing Hernandez on the wing paid off, where he was able to disrupt RSL playmaker Fabian Espindola just enough to limit his effectiveness. In the center of the field, the Quakes reduced RSL's Javier Morales to being a spectator for long stretches of the game.

Up next is a home match with DC United this Saturday night. With the fine performances in Utah, it will be interesting to see how Yallop sets up the team for their return to Buck Shaw Stadium.