FCGP shut out at home 2-0 by Sky Blue FC

Share All sharing options for: FCGP shut out at home 2-0 by Sky Blue FC 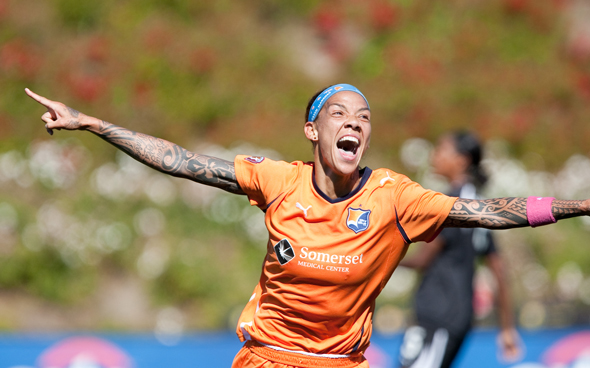 Sky Blue FC came into Pioneer Stadium in Hayward, Calif., and were able to do exactly what they needed to do: beat the league-leading FC Gold Pride, 2-0, courtesy of two second-half goals.

Rosana got things started for the defending champs, scoring a goal in the 58th minute; Tasha Kai put home the insurance goal in the 88th minute, and Sky Blue FC (5-4-2, 17 points) jumped into third place with the win.

Gold Pride pressured the Sky Blue FC goal relentlessly the entire second half, but the defense was up to the task, and Miettinen feels that's the key to winning any game.

"Defense is the key to any game," Miettinen said. "When the defense is united and works together, it helps them to defend against great individuals like Marta, (Kelley) O'Hara and (Christine) Sinclair."

With the loss, FC Gold Pride (7-3-1, 22 points) fell for the first time at home this season (4-1-1) but remain in first place going into the All-Star Game presented by U.S. Coast Guard Reserve in Georgia this week.

Heading into the locker room, neither team grabbed an edge of play as they played to a stalemate in the opening 45 minutes.

Gold Pride began to show signs of waking up in the second half. Kelley O'Hara recorded the club's first shot on target -- albeit a non-threatening one -- in the 51st minute. In the 55th minute, the Pride had a free kick that Marta sent into the box to O'Hara who headed it into space that Bardsley corralled.

But Sky Blue FC was the first to get to on the board. In the 58th minute, Heather O'Reilly got the ball on the right wing with loads of space and sent a perfectly lofted ball into the box which Rosana dove and headed home past Barnhart for the 1-0 lead.

"We went down a goal and created some very good chances," said Gold Pride coach Albertin Montoya. "You have to finish your chances."

Gold Pride continued to control the possession for the duration of the second half. But with the team pressing forward, Sky Blue FC got a quick counter-attack goal in the 88th minute by Tasha Kai to put the game away for the defending champs.

"That's what's going to happen," said Montoya, who was a bit surprised his team didn‘t come through at the end of the game. "You're either going to tie it, or maybe give one up."

FC Gold Pride will send its entire traveling roster to Atlanta with the five all stars -- Marta, Sinclair, O'Hara, Shannon Boxx and Rachel Buehler -- and all-star coach Montoya to Atlanta as the All-Star Game is played at the Atlanta Beat's home stadium, KSU Soccer Stadium in Kennesaw, Ga. Gold Pride take on the Beat on Saturday, July 3, at 4 p.m.

Gold Pride pressured the Sky Blue FC goal with a chance in the fourth minute. Rachel Buehler fed Kelley O'Hara to feet who one-touched a square ball to Boxx. Boxx took a touch to her left foot and sent a floated ball into the center of the box but Bardsley knocked it out of harm's way before Christine Sinclair could knock it in.

Sky Blue had its first golden chance at goal with the team leader in goals, Laura Kalmari unmarked at the penalty spot in the 19th minute. Yael Averbuch got the ball at the top of the box on the right side and sent a ball to Kalmari's feet and she mishit it and it fluttered into the arms of Nicole Barnhart with no threat of beating the Pride's keeper.

India Trotter walked around Kandace Wilson of the Pride in the 30th minute and was one on one with Barnhart in the goalkeeper's box. Trotter got caught in the middle of shooting and crossing it to Kalmari in the middle of the box and knocked a slow-moving shot that Barnhart pounced on.

Pride's offense took a long hiatus and got its second chance at goal in the 41sr minute. Boxx began the attack, heading to the left side before sending a through ball to Sinclair's feet in the box. Sinclair ran onto the ball and played a cross on the ground targeting Marta. Christie Rampone was able to muscle Marta to the spot and the ball rolled through the box and out for a goal kick.

Gold Pride tried to push ahead for the equalizer in the 61st minute, with Marta dribbling her way around defenders and sending a lofted ball into the box that Boxx got behind and headed to goal, but just trickled wide.

Second-half sub Tiffeny Milbrett nearly put the Pride on the board in the 65th minute when she unloaded a shot just outside that box that beat Bardsley, but connected with the crossbar before going out for a goal kick.

And in the Pride's next rush up the field, O'Hara and Marta teamed up for a one-two at the top of the box that O'Hara took a shot at the end of the combination. However, Bardsley, one of the WPS' top keepers, and an All-Star Game starter, was up to the task.

"After last week (a 4-1 home loss to Philadelphia Independence), we had a lot of revamping to do," said Bardsley. "We just came together ... and all performed our roles and responsibilities to the best of our ability."

O'Hara tried her chances with Bardsley again in the 69th minute, but her shot was parried by Bardsley over the net for a corner. A minute later, O'Hara -- who stepped up her play in the second half -- sent Sinclair into the box. Sinclair beat Bardsley and got the apparent game-tying goal, but the play was blown dead to an offside.

Sinclair got in the play-making mood in the 72nd minute, beating her defender on the right flank and taking the ball into the box then sliding a pass to Marta who took a right-footed shot (her off foot) just wide of the target.

Gold Pride continued to pepper the goal with shots, including a 78th minute opportunity by Milbrett. After Marta teamed up with Sinclair in the box, Sinclair sent a ball to the open space at the top of the box that Milbrett ran onto and hit a shot first time. Milbrett's shot was low, with pace, and beat Bardsley but just whizzed wide of the target.