Gold Pride and Freedom battle with first place on the line

Share All sharing options for: Gold Pride and Freedom battle with first place on the line 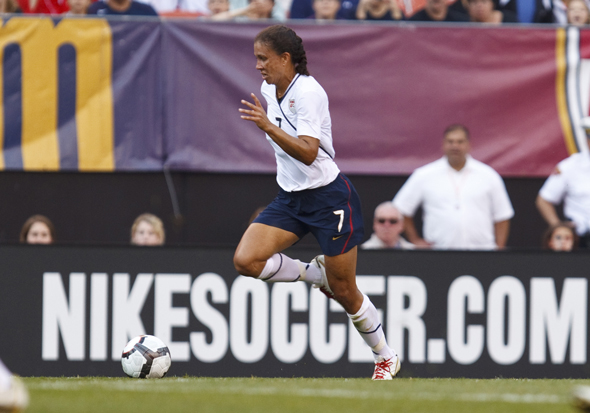 It's a battle for first place when FC Gold Pride hosts Washington Freedom on Saturday night. Washington is on a roll, going 3-0-1 over its last four, while the first-place Pride are coming off its first loss since opening weekend.

After dropping a 1-0 decision to the Chicago Red Stars, and losing its five-game win streak in the process, the Pride are hoping to return to form at home at Castro Valley Athletic Stadium against the streaking Freedom.

"We got away from our game," said Gold Pride coach Albertin Montoya of the loss to Chicago. "We played a little bit more of a long ball game and started pressing too much when we didn't necessarily need to do that."

Chicago went up early in the second half, and it was the first time since opening weekend that the Pride have trailed in a game, and Montoya thought the team may have panicked.

"We were a little panicked," said Montoya. "Not to make excuses but there were a lot of distractions this week, and as a coaching staff, we could have done better to deal with that and we'll make sure to learn from that."

Montoya will get a coach on the field beginning this week when the Pride look to remain calm against the top-scoring team in WPS. Gold Pride signed Shannon Boxx (who became a free agent when the St. Louis Athletica shut down its operations on Thursday, May 27) on Tuesday, June 1.

"We're very excited to have Shannon join the Pride," said Montoya. "She is one of the best midfielders in the world. Her experience, leadership and skills are invaluable. She has all of the qualities we're looking for in a player, I know she'll fit in very well with the Pride."

Boxx joined the Pride for its Thursday training session and is expected to be in uniform on Saturday night when the team take on Abby Wambach and the Freedom.

"I don't want to be seen as just a defensive midfielder anymore," said Boxx. "So the fact that (Montoya) said he would love for me to go forward and defend, I was sold (on joining the Pride)."

And the fact that Boxx is a California native (Redondo Beach), it only made things a lot easier to join the lone West Coast WPS club.

"Obviously the weather and being back in California helps," said Boxx.

"I've actually known a bunch of the players from before, which is great cause it makes it a lot easier to get acquainted and jump back in," said Boxx after her second day of training with the club. "Practices have been really fun, the team is obviously doing very well, so the energy is positive. I'm excited."

After missing a week of games, Boxx is ready to go, and expects she'll see some time on the field.

It won't be easy for Boxx and the Pride, going up against a Washington team that has racked up 10 points over the last four games to cut the Gold Pride first-place lead to two points. Gold Pride (5-2-0, 15 points) puts first place on the line; the Freedom (4-2-1, 13 points) can leapfrog them with a win.

"We are not doing anything different in training but we have seen good development of our competitive mentality," said Freedom coach Jim Gabarra. "We have done a better job of not giving up soft goals or easy scoring chances over the past few weeks.

"Abby's form and all the other players playing their roles is what has the team in a good place right now," concluded Gabarra.

And for Gabarra, to keep his team playing at a high level, the focus needs to go to Marta and all others will be affected by her being limited.

"Whenever you play against Marta she is the one you must focus on limiting," Gabarra said. "I do not think you can shut her down but the goal is to limit what she creates and that will limit how effective (Christine) Sinclair and (Kelley) O'Hara are."

And of course, coming from the Gold Pride side of things, they -- like the Freedom -- are concentrating on stopping the opposition's attack.

Washington is leading the league in goals, so pressure won't go solely to Wambach. Montoya feels there's lots of talented players to keep an eye on.

Coming off a tough loss to a sub-.500 team in Chicago last week, Montoya felt his team may not have been entirely prepared. This week, it won't be hard to get motivation to get geared up for this match.

"I don't think they need much more motivation than going up against the second-place team," said Montoya. "And the winning team will determine who's in first. That in itself is huge motivation."