Share All sharing options for: Earthquakes fall flat in 2-0 loss to FC Dallas 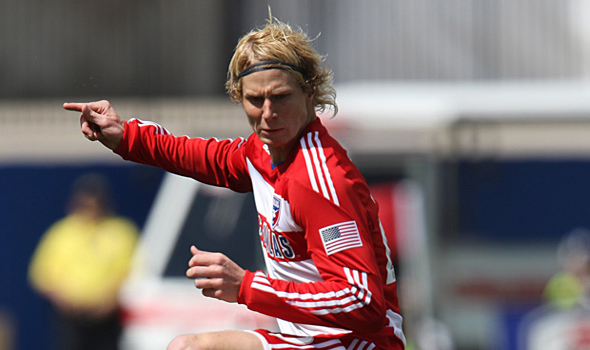 The San Jose Earthquakes wilted in the early summer heat of North Texas while losing against FC Dallas 2-0 in a match they rarely appeared competitive. A second half brace from midfielder Brek Shea sealed all three points against a Quakes team that tried valiantly to keep pace with the home team, but eventual showed the signs of playing three MLS matches over an eight day stretch.

With temperatures on the field approaching 100 degrees in the early evening sunshine, head coach Frank Yallop mixed up his starting line-up from last Wednesday's 2-2 draw with the Columbus Crew in an effort to bring more energy to the team. Chris Leitch and Ike Opara returned to the defense, while Scott Sealy made his first start of the season at forward. Arturo Alvarez also started at forward, with the team's leading scorer on the season, Chris Wondolowski falling back into the midfield.

Neither team opened up the match with a lot of energy, as the Earthquakes seemed content to play in a more defensive formation and Dallas tried unsuccessfully to rain long passes deep into San Jose territory.

In the 9th minute, midfielder Atiba Harris collected a nice feed on the right flank and drove toward goal. He saw Cunningham charging toward the far post, but his cross attempt was expertly cleared by Jason Hernandez for a Dallas corner kick.

A minute later, Cunningham received a well flicked on pass in space behind the defense. As goalkeeper Joe Cannon rushed out toward the speedy forward, Cunningham attempted to lob the ball over him, but Cannon was just able to deflect the shot forward with his uprightly stretched gloves. Following the ball out of the area, Cannon makes another touch to deflect the ball away from a lingering Shea before clearing it from danger. The sequence marked the first fortunate moment for the Earthquakes defense, while it signaled a surge of offensive pressure from the Hoops.

With the Quakes adopting a 4-4-1-1 formation -- with Sealy the lead forward and Alvarez the withdrawn forward -- they did little to pressure Dallas up the field. Instead, they time and time again allowed Dallas to carry the ball forward, or punt it over the midfield to their forwards. Unlike in previous games this season against Chicago and Chivas USA, the Quakes were unable to mount any sort of counterattack to this point in the match.

Finally in the 16th minute, Alvarez managed the first shot of the game for San Jose after Wondolowski did a nice job stepping in front of a Dallas pass near midfield, and feeding the ball forward. For the first time in the game, the Quakes midfielders were high enough up the field to disrupt the Dallas defenders before they could mount their attack.

In the 17th minute, Cannon was forced to make a nice reaction save on a Shea shot from the left side of the penalty area. Leading up to the shot, Harris shook off defender Ramiro Corrales near the midline, then ran down the right touchline unimpeded. As he turned toward goal, he tried to pick out Shea on the other side of the penalty area, but the pass was not spot on, and Shea was closed down as he set up to take the shot.

In the 21st minute, wing defender Jair Benitez received a pass out on the left side from Harris that left him with plenty of space in front of the Quakes defense. As he surveyed the penalty area, he spied Cunningham near the penalty spot, and delivered a fine crossing pass right to the 2009 MLS scoring leader. However, he couldn't muster more than a lackluster effort toward goal, as he awkwardly trapped the ball with his groin area, leading to an easy save for Cannon. Cunningham moved gingerly away from the area at the conclusion of the play.

Unfortunately for the Earthquakes, during the same sequence, central midfielder Andre Luiz went down at the top of the area clutching his bum left knee. After a half-hearted attempt to go on, he indicated that he was done for the night, and Justin Morrow entered the game as a substitute. Morrow moved into the left midfielder spot while Bobby Convey pushed over into the center spot vacated by Andre Luiz.

In the 26th minute, two corner kicks in succession for Dallas lead to a near miss by the Hoops on their second attempt. When Cannon rushed out to disrupt the cross, defender Ugo Ihemelu got a deflected touch on the ball toward goal. But a resolute Convey stayed on the goal line to control the ball and quickly put it away from danger.

As the match passed by the 30 minute mark, Dallas was still in complete control of matters, despite San Jose's continued clogging of the interior of the field. The Hoops have tried a number of long balls to try to beat the defense, with limited connections to the forwards, and a number of offside calls. The Earthquakes have mustered only one shot toward goal, and have yet to establish any offensive rhythm.

During the 43rd minute, the Earthquakes held some nice possession in the Dallas end of the field, until Morrow tried an ill-advised through ball to Alvarez that was easily picked off by the Dallas defense at the top of the penalty area. In a rapid transitional counterattack, Benitez stormed up the right side, before unleashing a perfect cross into the box. Cunningham was there to meet the ball, with ample space between central defenders Hernandez and Ike Opara, but his one-timed shot attempt somehow goes over the crossbar from about 12 yards out.

Just a minute later, Dallas was on the attack again down the right flank. Benitez again finds space with the ball before delivering a pinpoint cross, this time to Ferreira at the top of the six-yard box. However, his well-paced header flies just wide of the near post, and the Earthquakes dodge another bullet.

The halftime whistle finally blew, giving the lethargic looking Earthquakes a chance to rest and regroup. FC Dallas sputtered a bit at the start, but really asserted themselves over the final 30 minutes. Some good goalkeeping from Cannon and some poor finishing from the Hoops was enough to leave the match scoreless at the intermission.

In the 49th minute, the Earthquakes found themselves with a deep throw-in. After sizing up the situation, long-throw specialist Brandon McDonald elects to go short to Convey. After taking a touch toward the center of the field, he sent a high cross toward Opara at the far post, but goalkeeper Kevin Hartman was able to collect the ball ahead of the Earthquake defender.

Despite tightening their defense, the Quakes were still chasing the ball more often then being creative in advancing past the half way line. Passing was either errant or nonexistent on too many possessions, which gave Dallas the time to advance down the wings and deliver quality crosses into the penalty area.

In the 55th minute, with Dallas again exerting pressure and showing an elated urgency to break through against the Quakes resolute defending, Benitez sent a deep cross to Harris on the left edge of the area. After dispossessing the Hoops forward, Morrow tried to clear the ball up the line, but it instead fell at the feet of halftime substitute Eric Avila. He took a touch to set himself, before looping a curling shot over a rooted Cannon that traveled just high and wide of the far corner of the goal.

Three minutes later in the 58th minute, FC Dallas finally broke the scoreless tie through a nice sequence on the right wing. Gathering the ball in plenty of space before being closed down by Wondolowski, Ferreira took the ball to the byline before cutting a ball back into the six-yard box. Shea was there to one-touch the ball past Cannon and into the back of the net. Not unexpected from the level of pressure being applied by Dallas, the Quakes looked crestfallen at having let in the opening goal.

Just over a minute later, the Quakes let in the second goal of the game, and the second goal from Shea. A long ball from the Dallas end of the field appeared headed for the San Jose penalty area, with Chris Leitch sheparding the ball toward his ‘keeper. Unfortunately, he was unable to do enough with the bouncing ball, and Shea opportunistically applied enough pressure on the defender to create his own chance at goal. Cannon stepped forward to disrupt the proceedings, but could not secure the loose ball. He could do little to stop the fumbled ball from settling on Shea's right foot and being sent into the goal for a 2-0 lead.

Coach Yallop turned to the bench in the aftermath of the Dallas scoring spree to bring in fresh players at two forward positions -- Ryan Johnson was in for Sealy and Cornell Glen was in for Morrow in the 63rd minute.

After a nice spell of pressure from the Earthquakes, the game settled down again. Clearly, Dallas was content to level off on their on-field intensity while holding a two goal lead. With the Quakes desperate to get possession of the ball, first Hernandez in the 70th minute, then Wondolowski in the 72nd minute picked up yellow cards for tough professional fouls.

With the Earthquakes playing further up the field, they were ripe for a Dallas counterattack in the 73rd minute that had Heath Pearce behind the defense along the right touchline. He pulled the ball back for Avila just inside the penalty area, but he sent his low shot just wide of the far post. Making things more interesting on the play, second half substitute Marvin Chavez nearly tucked the ball into the goal with a fine sliding effort.

Chavez nearly made it three for Dallas in the 81st minute as he executed a perfect give-and-go with Ferreira in the midfield that left the younger winger with just Cannon to beat. With the Quakes defenders closing in, Chavez pulled his shot well wide of the far post. San Jose was looking particularly uninspired at that point, while the Hoops did not appear to be giving up on extending their lead.

With the outcome of the match in little doubt, both teams knocked the ball around over the final 10 minutes of the match, and the final whistle sounded on the 2-0 FC Dallas win.

The Earthquakes return to the Bay Area looking forward to a nearly three week break before their next game on June 25th against Real Salt Lake. Twenty days to reflect on a disappointing three game stretch where the team earned only 1 point from a possible 9. Twenty days to regroup ahead of a busy summer of soccer as the Earthquakes look to make a push toward the MLS Cup playoffs.