Share All sharing options for: FC Gold Pride remains top of WPS after 1-1 draw with Freedom 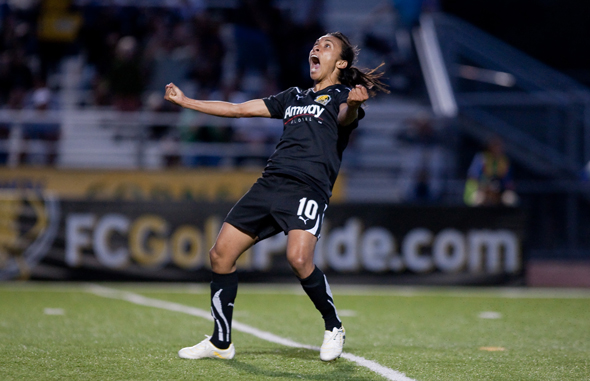 FC Gold Pride and Washington Freedom went into their tangle on Saturday night at Castro Valley High School Athletic Stadium with first place on the line. The game didn't disappoint.

Gold Pride dominated the possession and created countless opportunities at goal, while Washington's Allie Long netted one of the best WPS goals of the season en route to a 1-1 draw in front of the 3,442 fans in attendance.

Meanwhile, Marta came out to have arguably her best game while in a Pride (5-2-1, 16 points) jersey, taking a number of shots, including the only one to beat Freedom (4-2-2, 14 points) keeper Erin McLeod, while helping her club maintain sole possession of first.

Shannon Boxx, playing in her first game with the Pride, was a factor early on, heading a loose ball over McLeod but just over the crossbar for a goal kick. Boxx was set up on a throw-in from Kandace Wilson in the fourth minute, but couldn't convert.

In the 10th minute, Christine Sinclair and Marta attempted to hook up inside the box without success. Sinclair stole a Freedom attempted clearance and dribbled into the box before feeding Marta, who tried getting it to her stronger left foot. Marta was dispossessed and the threat went to the wayside.

Abby Wambach somehow lost the eyes of the Pride defense in the 13th minute and got in behind the defense. Beverly Goebel sent a low cross into the box that Wambach redirected toward goal, but missed wide.

When the Pride remembered to mark Wambach, it nearly cost them, too. Wambach broke free from a double team and fed a pass to Christie Welsh who found Sarah Huffman open on the left side of the box. Her shot, however, went over the woodwork, with no threat of beating Pride keeper Nicole Barnhart in the 17th minute.

Marta was again causing havoc in the 23rd minute. After pressuring the Freedom defenders in the box, Nikki Marshall booted a ball right off Becky Sauerbrunn that almost fell in the net, but McLeod ensured it went out for a corner. On the ensuing corner, Boxx ran down Marta's cross and headed it just over the net for a goal kick.

Gold Pride strung together several passes in the 33rd minute and nearly got themselves on the board. Marta found Sinclair who switched the field to Wilson. After gathering herself, she lined a cross that Kelley O'Hara ran onto but headed it wide.

Freedom got on the board after some lackadaisical play by the Pride. Pride defenders dispossessed the Freedom on several occasions but got sloppy in their clearances. Sonia Bompastor and Allie Long executed a perfect two-v-one to beat Sinclair and Long was the beneficiary, burying a 25-yard bomb past Barnhart for the 1-0 lead in the 38th minute.

Despite the Gold Pride holding the majority of the possession and creating several more quality chances than the Freedom throughout the first 45 minutes, Washington went into the locker room up 1-nil.

Gold Pride came out of the locker rooms with a purpose and nearly scored on two separate occasions in the second minute. Off a corner, the ball trickled outside the box and Becky Edwards put a foot on it that McLeod had to dive and stop; less than 30 seconds later, the Pride sent a cross into the box but neither Sinclair nor O'Hara could track it down.

In the fourth minute, O'Hara freed up her right foot and buried a shot that beat McLeod to the far post, but subsequently banged off the woodwork. When Marta tracked it down, she put a head on it but it went wide.

A minute later, Marta got her left foot open and slammed a shot that McLeod had to scramble to save, and did so, but it went out for a corner. McLeod finally settled things down when she caught a Marta shot off a short corner in the 52nd minute.

Marta continued her strong play nearly putting home the equalizer in the 63rd minute. After taking on five Freedom defenders, she side-stepped the whole bunch and rifled a shot that beat McLeod but just went wide. Moments later, Marta fed Sinclair who chest-trapped it down to her left foot and let it rip, missing just over the crossbar.

Gold Pride put a string of possessions together where they entered the Freedom box. Marta was the aggressor for the Pride but got stopped each time. On ensuing corners, the Pride came close but still were unable to figure out McLeod.

Marta finally figured out McLeod in the 75th minute. Camille Abily, who came on for Solveig Gulbrandsen in the 62nd minute, headed a ball to the feet of Sinclair. Sinclair turned and sent a long ball to Marta, who did the rest.

Showing off her blazing speed, Marta beat Cat Whitehill to the ball, tipped it by her and raced into the box before firing home a left-footed strike just out of the reach of a laid out McLeod, tying the match at 1-1.

Gold Pride nearly went up 2-1 but Marta was a bit unselfish. Sinclair stole the ball from Nikki Marshall and Marta took the loose ball and dribbled it into the box before feeding it back to Sinclair despite having an open shot at goal. Sinclair was stripped of the ball and McLeod pounced on it to end the threat.

Gold Pride got the Freedom on its heels in the 84th minute and nearly put home the go ahead goal when O'Hara found Sinclair at the top of the box with room to unload. However, Sinclair's shot went right into the hands of McLeod.

In the 90th minute, Abily nearly made her return to the pitch one worth remembering. O'Hara took a through ball from Marta and fed it back to Abily who took her shot just inside the box, but missed high.

Three minutes-plus of stoppage time wasn't enough for either team to find a game winner, and the two sides ended in a 1-1 tie.