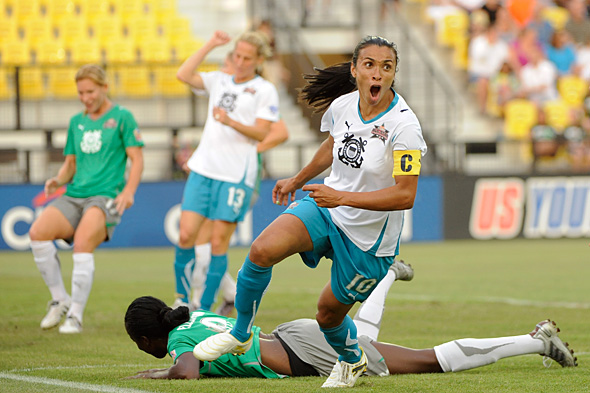 In the second annual WPS All-Star Game on Wednesday night, Marta XI was able to outscore Abby XI in an expected high-scoring game, 5-2. Marta of FC Gold Pride netted two goals early to set the pace for her club, winning MVP honors for the game.

“Before I played professionally, I always dreamed of playing for the Brazilian national team, and I always dreamed to be playing at such a high level,” said Marta through a translator. “Today I wasn’t the MVP. The whole team was the MVP.”

It wasn’t long before the captain of Marta XI took over the game. Just over six minutes into the match, Marta took a pass from Kelly Smith — initiated by a Rachel Buehler outlet ball — which the Brazilian slipped under the arm of Hope Solo to give her club an early 1-0 lead.

And just when fans were beginning to sit down, Marta showed why she’s the reigning four-time FIFA World Player of the Year when she took a loose ball, turned and went all the way down the pitch before blasting a shot past Solo for an eighth minute 2-0 game.

Abby XI’s captain, Abby Wambach of the Washington Freedom certainly thinks the all-star format is a perfect style for her opposition.

Once Marta solidified her All-Star Game captain selection with the second goal, she began to act as a playmaker for the rest of the talented roster, showing she is more than just a goal scorer, even returning back as deep as her defensive 18-yard box in her 69 minutes of play.

“The All-Star Game is a celebration of soccer,“ said Marta. “It’s important for me to score goals, but it’s also important to make everyone a part of this.”

In the 18th minute, Abby XI almost cut the Marta XI lead in half. Lori Chalupny played a through ball to Lauren Cheney’s feet. With Brittany Taylor tracking, Cheney spun and slid a pass for Eniola Aluko inside the six, but the ball was too long and rolled out for a corner.

Abby continued to put the pressure on the Marta goal, but couldn’t finish. In the 22nd minute, Cat Whitehill sent a free kick into the box into a scrum. McLeod raced off her line to punch it away but miss-timed her jump and it went behind her, leaving Tina Ellertson, who only needed a touch on the ball to net the team’s first goal, couldn’t reach it.

FC Gold Pride players continued to dominate the match when the inaugural WPS All-Star Game MVP Christine Sinclair scored Marta XI’s third goal in the 31st minute. Kristine Lilly collected a Marta cross on the far side of the box and worked her way around Amy LePeilbet before dropping a pass to Allison Falk. Falk took a shot that Solo couldn’t handle and Sinclair scored one of her patented scrappy goals, pounding the rebound into the back of the net.

Abby XI narrowed the lead to two goals in the 35th minute. Heather O’Reilly had the ball on the right wing and sent a ball into Wambach  who drove a header on frame that McLeod could only parry. Aluko was on the spot and put home the rebound into an open net, cutting Marta XI’s lead to 3-1.

Some All-Star Game nerves broke out in the 39th minute when Atlanta Beat’s Ramona Bachmann, after getting embarrassed by the fancy footwork of O’Reilly, went in for a not-so-legal tackle, much to the frustration of O’Reilly. Cooler heads eventually prevailed.

Both sides went into the half with Marta XI holding on to the two-goal, 3-1 lead. And after nearly a half hour of play in the second half without goals, the 4,610 fans in attendance at KSU Stadium in Kennesaw, Ga., saw things open up.

Marta XI extended their lead in the 74th minute. Amy Rodriguez got into the box and couldn’t shake her defender so she dropped the pass to Aya Miyama of the Atlanta Beat, who took a couple touches to the top of the box on the Beat’s home turf and hit one past new Abby XI keeper Jillian Loyden for a 4-1 game.

Abby XI pulled a goal back in the 78th minute when O’Reilly sent in another pinpoint cross, this time from the left side, that was headed by the Boston Breakers’ Lauren Cheney past Gold Pride keeper Nicole Barnhart. But Marta XI answered just two minutes later when Amy Rodriguez out-powered Ellertson before burying her shot into the upper netting for a 5-2 Marta XI lead that it would hold to victory.

Game notes: Michelle Akers, a member of the 1996 U.S. women’s Olympic team and a 1999 Women’s World Cup winner — and a building block to the women’s game — made the first kick to Marta prior to the game. There were 18 total substitutions with each player on both rosters getting minutes.