Earthquakes bust the Union with 2-1 victory in Philly

Share All sharing options for: Earthquakes bust the Union with 2-1 victory in Philly 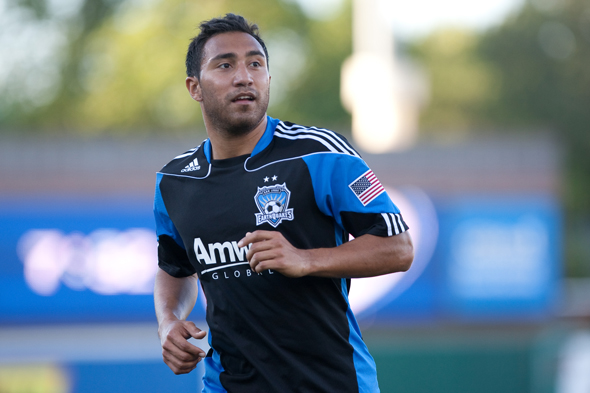 Second half substitute Arturo Alvarez scored the late game winner for the Earthquakes in a 2-1 victory over the Philadelphia Union. Photo: Kelley L. Cox, isiphotos.com

The San Jose Earthquakes pulled out an improbable 2-1 victory over the Philadelphia Union at a nearly sold out PPL Park Saturday evening. After falling behind 1-0 on a 14th minute goal from Fred, the Quakes evened the score in first half stoppage time through a Cornell Glen tap-in before getting the game winner in second half stoppage time from an Arturo Alvarez gem.

The Union had the majority of possession on the day, and struck early to put the Quakes defense further back on the field when Fred took a nice pass from Danny Mwanga and coolly beat Jon Busch to the near post. Philly continued to press throughout the half, and nearly doubled their lead on a nice volley from Fred in the 37th minute that shot agonizingly along the goal mouth before going out for a goal kick.

Completely against the run of play, the Earthquakes equalized in the 45+1th minute after a nice hustle play from Chris Wondolowski. Chasing down a long ball from Jason Hernandez along the left side that looked headed for a goal kick, Wondo raced past the defense to catch up to the ball and deftly cut a pass back into the penalty area. Glen was there at the top of the six-yard box to calmly slot the ball into the back of the net to tie the game at 1-1.

The second half saw the Union continue to dominate possession in front of the Quakes area. Sebastian LeToux proved to be the most energetic for the home side, as he sliced and diced the Quakes defenses time and again to create several scoring opportunities. Fortunately, goalkeeper Busch was up to the challenge, and he parried away each of LeToux's attempts to restore the Union lead.

As the game approached second half stoppage time, the Union found themselves with a free kick on the right side of the penalty area. With every Quake helping on defense, they managed to deflect the free kick and gain the ball. Bobby Convey took the ball into space and found a racing Alvarez near the midfield line. With one defender to beat and 50 yards to goal, Alvarez streaked down the field before getting the ball onto his preferred left foot just at the top of the area. His low shot to the left post, beat an advancing Chris Seitz and gave the Quakes the stoppage time lead.

A late yellow card foul from Ramiro Corrales gave the Union one last chance to equalize deep into stoppage time, but the free kick went straight into the wall, and the official blew his whistle to signal full time.

The victory was the Earthquakes first since May, and was another valuable three points earned on the road. The Union surely must feel they deserved more from their efforts, but the Quakes did what they needed to do to steal the points at the end.