Share All sharing options for: Gold Pride extend lead atop WPS table with 3-2 win over Freedom 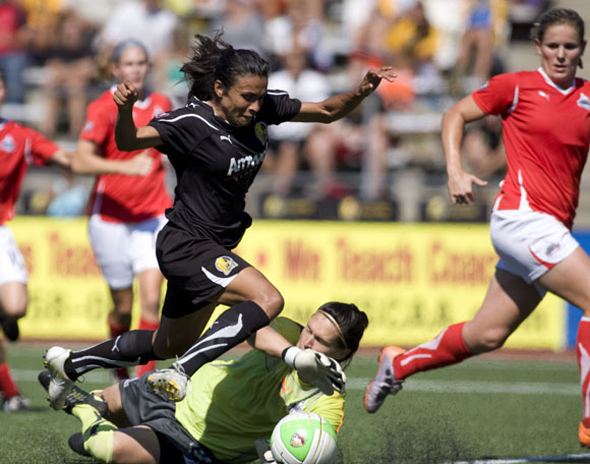 Marta scored twice, and Solveig Gulbrandsen netted the third to give the Pride a 3-0 lead in the 70th minute. DC raced back to cut the Pride lead to one, but it wasn't enough as the Pride (9-3-1, 28 points) topped the Freedom (4-4-5, 17 points) to extend its first-place lead.

After the Freedom possessed the ball for the better part of 12 minutes, the Pride strung some passes together which led to the first goal of the game in the 13th minute.

Christine Sinclair played a perfectly-placed through ball into space for Marta who ran onto it just outside the box. Marta cut back and sent a square ball to Kim Yokers who played a one-touch back-heel pass to an overlapping Sinclair. Freedom defender Beverly Goebel took down Sinclair in the box, and the Pride were rewarded a penalty.

Marta took the kick for the Pride who, as a team, was 0-2 in penalty tries this year. However, Marta calmly placed it in the net with her left foot, past Freedom keeper Erin McLeod, for the 1-0 lead.

Washington pushed for the equalizer by sending in long balls from the midfield and, in the 27th minute, beat the Pride offside trap. Lene Mykjaland had only keeper Brittany Cameron to beat but Kandace Wilson showed her speed, catching up to the Freedom striker and shoulder-checking her to the ground to win possession.

And the Freedom had another golden opportunity at Cameron but couldn't even threaten the first-time WPS starter. French international Sonia Bompastor got behind the Pride defense, ran onto a lofted ball and hit a left-footed volley that sailed high and wide.

Gold Pride regained control of their possession-style game and produced the best chance of the half in the 44th minute.

Camille Abily, controlling a lot of play in her offensive central midfield role, sent a through ball into the box, targeting Sinclair, who quickly took a touch before finding Marta alone at the top of the box. Marta put the ball on her left foot and hit a low liner for the far post, but the all star keeper McLeod was able to thwart the try with a clutch kick save.

Gold Pride took the 1-0 lead into the locker room for halftime.

Gold Pride opened things up in the second half with a great chance for first-time starter Yokers to get her first goal of the 2010 season.

Sinclair boomed a kick downfield out of desperation with three Freedom defenders draped over her. Sinclair's desperation turned into a quality scoring chance, however, when Marta sprinted onto the 50-50 ball. The Brazilian international found Yokers who shot one low but McLeod got behind it.

And in the 55th minute, the Pride continued its pursuit of breaking the game open to no avail. Marta played a ball into space that Ali Riley ran onto. With McLeod chasing after the ball, Riley tried to power it by her with no luck. And just before the ball went out for a goal kick, Riley kicked it back to Sinclair.

Sinclair turned and played it to an open Marta, who dummied the ball through her legs to Abily, who took a shot at an open goal, but the Freedom defense recovered to kick it away.

Marta, who continued to play well throughout the game, coming off a player of the week performance (2G, 1A in 4-0 win at Atlanta) took a loose ball in the midfield and streaked down the field before being robbed of a goal in the 55th minute. But McLeod couldn't make another remarkable save 10 minutes later.

In her third golden opportunity in the run of play for Marta, it proved to be a charm. Sinclair took a ball at the left edge of the box and lofted a ball into her fellow striker by the penalty stripe. Marta corralled it with her left, cut right around McLeod, and slid it into the open net with her left for a 2-0 Pride lead.

Gold Pride extended its lead to three goals five minutes later. After McLeod gaffed a play, giving the ball to Tiffeny Millbrett's feet way out of position, Millbrett lofted a ball to the open net that was cleared off the line for a corner.

On the ensuing corner, Marta played a short ball to Abily who lofted a cross to Solveig Gulbrandsen. Fighting off her defender, the Norwegian international (who will be leaving the club after the July 17 match) headed it into the goal for a 3-0 lead in the 70th minute.

Washington tried to make a game of it, trimming the Pride's lead with goals in the 80th and 90th minutes. First it was Lene Mykjaland who ran onto a Brittany Bock cross, slamming it home cutting the lead to 3-1. Then Nikki Marshall outran the Pride defense to a 50-50 ball before beating Cameron to narrow the deficit to 3-2.

But it was too little, too late for the Freedom Gold Pride held onto the ball to close out the remaining minutes of stoppage time and went home with the 3-2 victory.