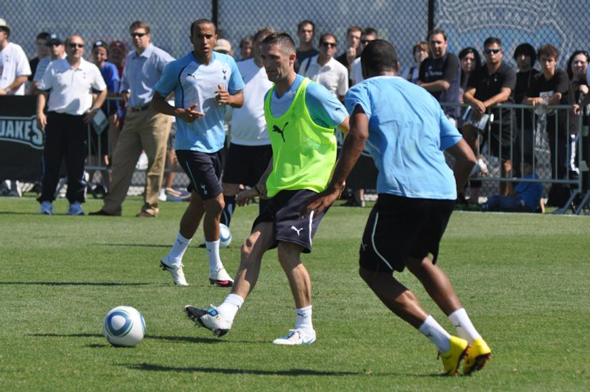 On a glorious sun-splashed morning at the San Jose Earthquakes Nutrilite Training Facility -- situated adjacent to the proposed new stadium site -- partner club Tottenham Hotspur conducted the first training session of their preseason U.S. tour. Head coach Harry Redknapp and his staff had his players trained in front of an enthusiastic audience of over 1000 local soccer supporters, and a few Quakes players as well.

With the players going through stretching exercises, abbreviated field 8 v. 8 scrimmages, and a training-ending crowd-pleasing finishing drill, the fans in attendance enjoyed an opportunity to see Spurs up close and personal. Of the throng of fans holding posters and clutching Sharpies awaiting a chance to get an autograph or two, many were decked out in Earthquakes jerseys, with some donning the Tottenham kit.

A large and vocal fan contingent wore the red-and-white checkerboard kits of Croatia and waved their country's flag as they watched national team heroes Vedran Corluka, Niko Kranjcar, and Luka Modric practice in San Jose. All the Tottenham players seemed to relish the attention over the two-hour training session and were gracious with their time as they signed autographs for over 30 minutes after practice to all who lined the field to watch them.

For many, it was a chance to see Premier League players in person, perhaps for the first time. Some of the youngsters in the crowd seemed most impressed by the speed of the players in the scrimmages. Others appeared more bemused by the whole affair, especially at the site of San Francisco 49ers Alex Smith and Joe Staley, joining near the end of the session to try their luck at finishing drills and spot kicks. 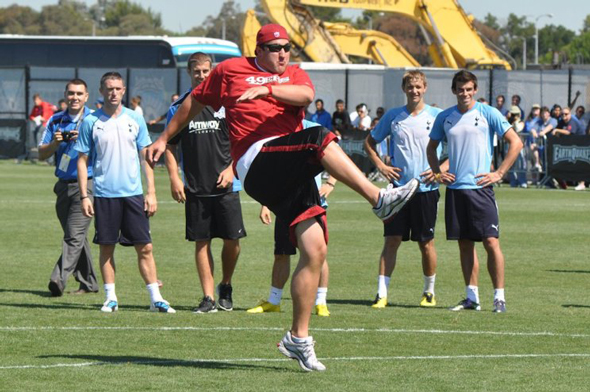 But for all, it was a wonderful opportunity to represent their local club, the San Jose Earthquakes, and show Tottenham the importance of MLS in the soccer community. Most soccer aficionados catch the Premier League on television each weekend, but for live soccer they head to Buck Shaw Stadium to cheer on the Quakes. Head coach Harry Redknapp welcomed the chance to bring his team to San Jose and shared some positive thoughts after Spurs training on the future of the game in the States.

"I think there are so many good young players in the U.S. and the talent pool is immense," said Redknapp. "You see that now in the World Cup, where I thought the US did very well. There are some good players here, and I think it is only a matter of time before the US becomes a real force in world soccer."

So much of that starts by having a successful domestic soccer league. Redknapp knows something about soccer in America -- he was a player, then a coach with the Seattle Sounders of the NASL back in the 1970s. He shared that even then he could see the potential of young American players, but that the opportunities were lacking for them to make the jump to elite international level.

"I spent some good time in Seattle," said Redknapp, "and I took some young American players with me back home to England where they did fantastic. But they came back here and there was no where for them to go to learn and progress. Still, the talent was here to be sure." 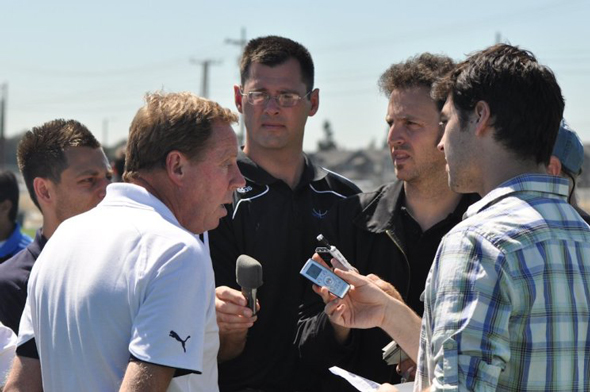 With MLS in its 15th year of existence, the development opportunities for the domestic player have dramatically improved. However, Redknapp did warn about a major problem he saw back in the NASL that he hopes won't be repeated in MLS -- chiefly, the signing of aging superstars from overseas.

"As the MLS gets stronger and you get the right types of players," cautioned Redknapp, "the most important thing is that the people you bring over are the right types of players. You need good professionals that can come over and work with the younger players. You don't want guys coming over to take the money and then show no interest in American soccer. They need to encourage the young players and be role models that they can learn from."

MLS man-of-the-moment Thierry Henry was presented as an example by Redknapp as a player that would be a big positive for the New York Red Bulls and the league as a whole.

"Thierry Henry is a fantastic player," exclaimed the Spurs coach. "He's one of the greatest players ever to grace the Premier League in England, and a great guy off the field as well. He'll be a great asset to MLS. He is a class guy and fantastic footballer."

Tottenham goalkeeper Carlo Cudicini was also keenly aware of the Frenchman's arrival to the U.S. He concurred with his head coach about the newest MLS designated player.

"Henry will have a great impact on the MLS," shared the Italian goalkeeper. "He is a great player with success wherever he played. He has helped his teams win many trophies. He has a great experience, and it will be great for the younger players to see him play. He will be a great ambassador for the league." 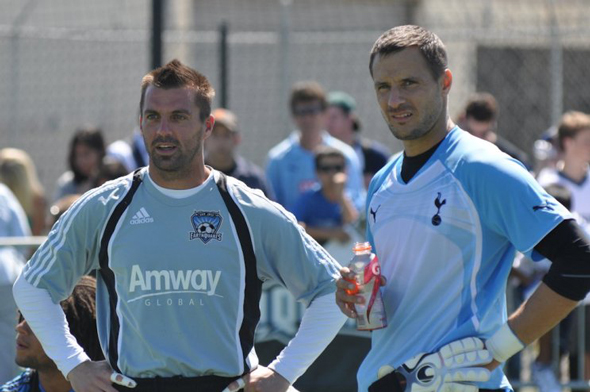 When asked if he would consider a move to MLS, Cudicini remained diplomatic. At nearly full fitness after a long recovery from injuries suffered in a motorbike accident late last year, the goalkeeper still hoped to make an impact this season for Spurs. Any plans to play in the U.S. will have to wait for now.

"The MLS has always been a league I've looked to," said Cudicini. "I love the way Americans love sports, not just soccer. I really admire the American sports fans. So maybe one day, I would. I am 37 years old now, so I am not young anymore, but you never know."

A full healthy and motivated Cudicini could very much be an asset to MLS, but his skills have definitely diminished from his glory days at Chelsea. Still, players of his character can be valuable as teachers and role models of the sport to young American players. With the profile of MLS expanding overseas, and the recent success of the U.S. Men's National Team at the World Cup Finals fresh in people's minds, perhaps more players in or near their prime will make the trip to the U.S.

"MLS is a league that is coming on well, and you can see from the World Cup that the US did very well," said Cudicini. "You see more and more American players coming to Europe to play in challenging leagues. MLS is definitely a league that is getting better and better and you are now seeing good players from Europe going there as well."

Another Spur with a well known pedigree is Irish international Robbie Keane. Back with the club after a successful loan spell at Scottish power Celtic, Keane trained vigorously to start the preseason. After performing some highlight reel shots during the end-of-training finishing drill, Keane spoke about MLS and soccer in the U.S.

"I think the league has certainly grown," Keane said. "It helps when you've got the U.S.A. in the World Cup. They had a decent tournament and they've got some good players there so I think over the years it's just going to keep growing."

Keane, were he to make a move to MLS, would immediately make a huge impact on the league through his ability and experience. The 30-year old goal scoring maestro remained a bit coy when asked about the possibility of plying his trade in MLS.

"I would consider the idea sure," smirked the Irishman, "but I'm happy for the moment in the Premiership. In a few years time when I get older, then maybe..."

Tottenham Hotspur faces the San Jose Earthquakes this Saturday at Buck Shaw Stadium. Kick off is scheduled for 1 p.m. and will be nationally televised on ESPN.

Special thanks to David Crawford for the photographs used in this article. His excellent gallery from Tottenham's training session can be found at fanbase.com