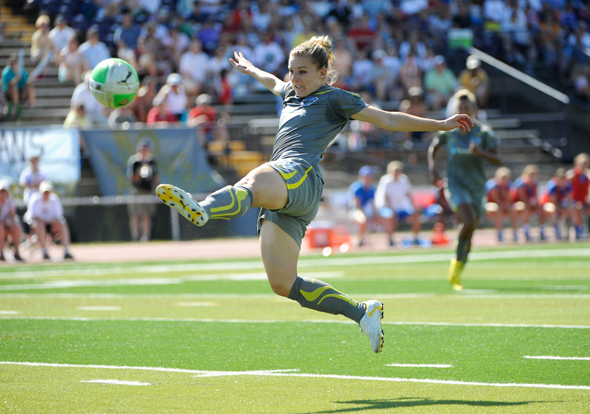 FC Gold Pride will need to find a way to contain WPS Player of the Month for June, Amy Rodriguez, when they face Philadelphia this Saturday. Photo: Howard C. Smith, isiphotos.com

FC Gold Pride will go for a stranglehold of the Women's Professional Soccer standings on Saturday at their home field of Pioneer Stadium on the campus of Cal State University-East Bay in Hayward, Calif. Squaring off with the first-place Pride (9-3-1, 28 points) are the second-place Philadelphia Independence (6-4-3, 21 points).

"FC Gold Pride has proved to be the measuring stick for WPS this year and we play them three times so we have to figure out their strength's and weaknesses and prepare accordingly," said Independence coach Paul Riley. "They have a very potent strike force and if we don't contain their forward line we won't get a result."

In the clubs' first meeting, the Gold Pride gave Philadelphia its first home loss of the season, trouncing them to a tune of 3-1 on June 13 in which all-star strikers Christine Sinclair (1) and Marta (2) tallied all the goals.

But Philadelphia's Amy Rodriguez, who didn't factor in the loss to the Gold Pride, has been arguably the hottest player in WPS since then, receiving player of the month honors in June, recording five goals and two assists in five games.

Unfortunately for the Independence, they'll be shorthanded this weekend -- maybe more so than the Gold Pride. While the Pride will be without regular starters Kelley O'Hara, Shannon Boxx, Nicole Barnhart and captain Rachel Buehler, Philadelphia will be without Lori Lindsey, Heather Mitts and Rodriguez.

"This week (in preparation), we assumed who we thought they would put in certain positions to replace those players who are missing," said Gold Pride coach Albertin Montoya. "We're going to play a system that will suit us for this game. We did the best we could do to prepare for what they're going to throw at us."

Philadelphia's missing players will take away much of their offensive production. They will, however, be fortunate to have regular starting keeper Karina LeBlanc in uniform, as well as their entire starting back line; Gold Pride, despite their absences, will still be with the likes of Sinclair, Marta, Camille Abily, Solveig Gulbrandsen (playing in her final game with the Pride) and Ali Riley, among others.

Gold Pride, without its four US women's national team players, was able to win its game last Sunday at home over the Washington Freedom, 3-2, in which Brittany Cameron got her first start and win as a WPS keeper.

"We never had any questions in our mind that she would come in there and do a spectacular job," said Montoya of his backup keeper. "Brittany is a leader in the back, and that's what we need."

Meanwhile, Philadelphia is coming off a bye week in which they took advantage of the rest.

"The rest time has been fantastic for our group and we are refreshed and raring to go for the second half of the season," said Riley. "We have enjoyed tremendous energy this week and I hope it turns into a good result for us on Saturday."

Having all this talent is something coach Montoya put together in preparation for these times when players would be called up for national team duties, especially when Montoya is constantly changing formations that best match-up with the Pride's opponent.

"We made sure we have soccer players, and intelligent players that could figure things out," said Montoya. "Whether we're going to play a 3-5-2 or a 4-4-2 (the coaching staff has done a good job at) making sure players understand their responsibility on the field ... we have players that can adapt."

That's why the Pride is the team to beat through the midway point of the season. Riley has conceded first place to the Pride, but even with his club's second-place standing, feels they'll need to scratch and claw to make sure they make it into the postseason, and it begins on Saturday against the Pride.

"I have challenged the players this week to raise their level over the next few games," said Riley, "as we play most of our closest foes."

Kickoff on Saturday at Pioneer Stadium is at 7 p.m.