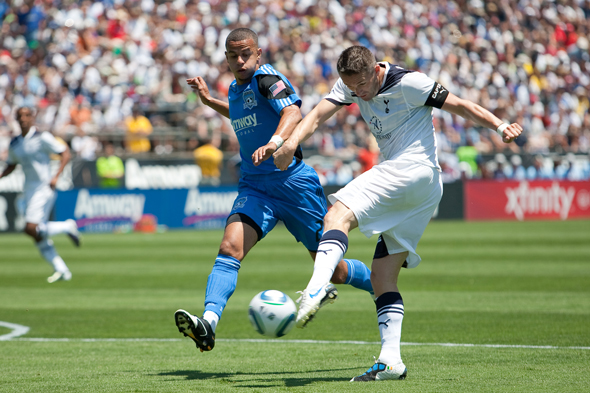 (Santa Clara)  Tottenham Hotspur came out Saturday afternoon to stretch their legs in the Santa Clara sunshine, playing a free-flowing exhibition against the San Jose Earthquakes that ended in a goalless draw.

Both teams got what they wanted out of the exercise: a sellout crowd, a clear, cloudless day, and (almost) no injuries. With a minimum of hard tacking, the game offered plenty of back and forth action despite the lack of scoring, and the largest crowd in Buck Shaw Stadium history, 10,712 was happy with the effort from both sides.

Tottenham coach Harry Redknapp said that the heat, 86 degrees at kick off, was "different than what we're used to, for sure, but it was good to get (us) fit."

"It's only our second game," Redknapp said. "The opposition made us work. They moved the ball, and I liked the way they played around the box. (San Jose showed) good ability. They passed the ball well, and made it difficult for us."

"I thought, on a hot day, it was played in good spirit." San Jose coach Frank Yallop said. "I think both teams tried to create chances and score goals. It's funny that it ended 0-0; we had 15 or 16 shots, and decent chances."

All 19 Earthquakes who dressed for the match saw action, and the boys in blue held their own against a club preparing not only for a Premier League season, but European Champions League play as well.

For San Jose, all the headlines were happening off the field. Rookie center back Ike Opara did not dress to ensure that his hamstring will be fit for Thursday's night match in Los Angeles. Meanwhile, it was announced that Chris Leitch was hurt and would miss Thursday's game, and that Eduardo had re-injured his thigh in training, and will have to wait several more frustrating weeks to break into the Earthquakes lineup.

The Spurs' line up was greeted with cheers by the sun splashed crowd. Despite missing several players recovering from World Cup duty, the Tottenham starting eleven included some famous names: including Robbie Keane, Jermaine Jenas, Gareth Bale, and Carlo Cudicini.

Tottenham appeared to get on the scoreboard in the 11th minute; Jenas slipping a sharp cross through the San Jose defense for Keane to slide into goal at the right post, but the play was ruled offside.

Keane also missed a couple of scoring chances from close range, unable to get on the end of a Kyle Naughton cross in the first half, and heading Gareth Bale's cross well high in the second.

On the day San Jose had as many chances as Tottenham, forcing Cudicini to make six saves to keep the game level. Ramiro Corrales' 25 yard drive had the Spurs ‘keeper stretching to punch it away in the 23rd minute.

In the 33rd minute, Cornell Glen cut inside from the left wing, dribbling around three Spurs players before firing from 15 yards, forcing Cudicini to get down to make a quality save.

"I though Bobby Convey and Ramiro Corrales were excellent in the first half," Yallop said. "They really drove our team on."

"It was a good example of what we as a team can do," Bobby Convey said. "(Spurs) are obviously in the third week of their preseason, so they're not at full strength, but I though we did well. We held the ball, we possessed the ball a lot.  If we can play like that against them, it shows we can play against anyone in MLS."

The second half didn't have quite the energy as the first, as the heat and numerous substitutions (7 for San Jose, 5 for Tottenham) took their toll. In the 53rd  minute, Arturo Alvarez took a throw in on the right wing and danced to the corner of the penalty area before letting fly with a left footed shot that Cudicini handled well.

Tottenham received a scare in the 67th minute when Gareth Bale went down in the San Jose penalty area after colliding with Omar Jasseh while clearing the ball. Bale hurt his left foot on the play, but was able to finish the match.

Jasseh, showing a lot of energy during his  45 minutes at left midfield, later received a yellow card for bringing down Luka Modric with a reckless tackle, the only caution of the match.

"I gave my players a bit more expression than I normally give them," coach Yallop said. "I wanted to find out, in a game like this, can they do it? And they can."

"What I liked about us today, is that we weren't overawed," Yallop said. "We should play well at home, but I think we weren't nervous, we weren't edgy. I liked the way we went about it. We weren't scared, and we played."

After wrapping up training in San Jose next Tuesday, Tottenham will travel to New York to face Thierry Henry and the Red Bulls, then play Sporting Lisbon before returning home.

The Earthquakes return to MLS action Thursday night, traveling to Los Angeles to take on the league-leading Galaxy in a match televised nationally on ESPN2 and ESPN Deportes.