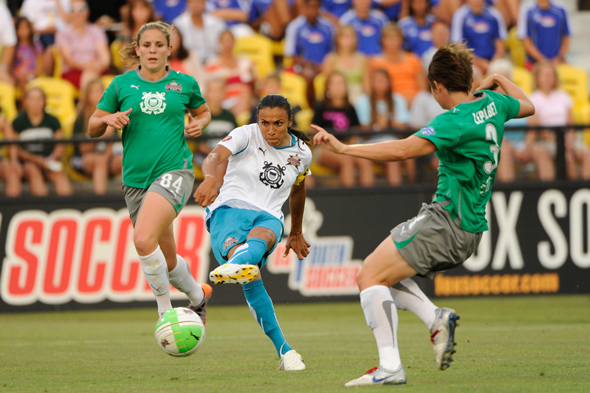 Thirty-six of the world's best women's soccer players met on Wednesday, June 30, at KSU Soccer Stadium in Kennesaw, Ga., for the 2010 WPS All-Star Game and it was the FC Gold Pride all stars that shined the brightest.

Marta, captain of the Marta XI squad, coached by FC Gold Pride's Albertin Montoya, took over the game early, scoring in the seventh and eighth minute to give her club an early 2-0 lead. It's her explosive play against the best of the best that shows why she is last season's WPS MVP and the FIFA World Player of the Year four times running.

"Before I played professionally, I always dreamed of playing for the Brazilian national team, and I always dreamed to be playing at such a high level," said Marta through a translator. Marta won the All-Star Game MVP award for her two-goal performance.

"We want to represent the Bay Area as best we can," said Sinclair. "With Marta and I scoring, hopefully we did that, but this is just to put a show on for the fans."

Also taking in the festivities on the field for the Pride were keeper Nicole Barnhart (a late addition to the roster, replacing the injured Sky Blue FC keeper Karen Bardsley who broke her collarbone during training) and defender Rachel Buehler for Marta XI; Kelley O'Hara and Shannon Boxx played on Abby XI.

"I'm extremely proud of them," said Montoya of his Pride players' success at the game. "They're just incredible team players -- obviously they're excellent individuals -- but that's why we've been so successful this year, because of how good of teammates they are, putting the team ahead of themselves, and that's what happened (Wednesday night)."

Marta and Wambach, as captains of the all-star squads, picked their starting XI in a playground style pick-em event held in downtown Atlanta on Monday, June 28. The experience for the Gold Pride was one they'll always remember.

"It's just a blast," said the Canadian national team striker Sinclair. "Here you are playing with some of the best players in the world; we were joking that (Marta XI) was the United Nations cause we had people from all over the place and it was just so much fun playing with players you normally don‘t get to play with."

Marta XI was made up of many international WPS players, while Abby XI consisted of mostly domestic players, in what made for an interesting, unplanned twist. And while the players were hoping they were giving the 4,610 fans at KSU Soccer Stadium a good show, the players -- and coaches -- were equally impressed with the fans, and facility.

"Oh my gosh, this place is amazing. I think everyone that is not on the Atlanta Beat is envious of the setup they have here," said Sinclair. "The field's amazing; the fans are amazing; the locker room facilities are world class; and I think there's something the rest of the league can look at and try to copy."

"It's my first time here, and (KSU Soccer Stadium) is unmatched," said Montoya. "I haven't seen a facility this incredible. It's perfect for the women's game -- not too big. And the field is one of the best we're going to play on this year; the locker rooms ... I got lost in there ... with all the things they provide for the players, and that's how it should be.

"Hopefully over time our league will have a few more stadiums like this around the country," Montoya concluded.

Gold Pride was also represented in the stands, with its entire roster in Atlanta for the week in preparation of its weekend tilt with the Beat. On Wednesday, they may have been the loudest fans in the stadium.

"We could hear them (cheering), but I think it's because you got Marta, one of the best players in the world," said Montoya. "They start supporting her, and supporting our team and it was great to see."