Share All sharing options for: San Jose Earthquakes midfielder Bobby Convey disappointed at not being selected to MLS All-Star team 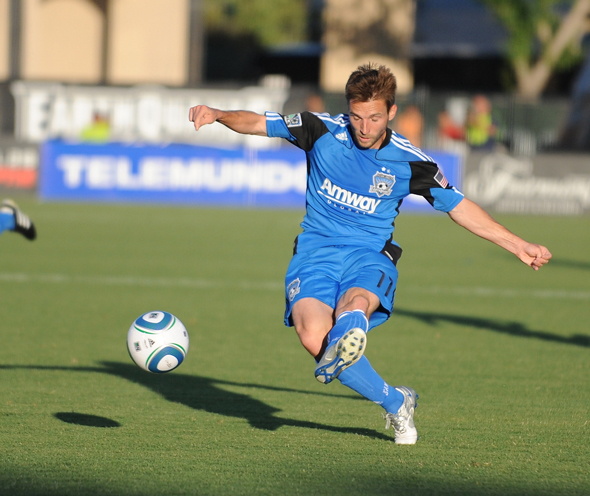 San Jose Earthquakes midfielder Bobby Convey, overlooked for selection to the MLS All-Star team, shows the form that has him second in the league in assists. Photo: Joe Nuxoll, centerlinesoccer.com

The San Jose Earthquakes have followed up two disappointing seasons with a strong 2010 MLS campaign. As it stands now, if the season were to end today, their current record would entitle them to one of the eight MLS Cup playoff berths heading into the postseason. The reasons for the successful turnaround from prior years are many, but chief among them is the team MVP-quality play from midfielder Bobby Convey.

So those that follow the Earthquakes carefully were surprised when the complete roster was announced for next Wednesday's MLS All-Star game in Houston against Manchester United and Convey was not on the list. His initial exclusion from the Starting XI -- a group that is voted on by the fans, players, coaches and media -- could be excused due to San Jose not being a big-market MLS city. However, not being named by All-Star coach Bruce Arena as a substitute? Even Convey didn't see that coming.

"I honestly don't know what to say," Convey told Center Line Soccer after getting the bad news. "All I can say is I'm second in the league in assists, and as a team we have completely turned it around from last year and to be in playoff contention. To be fifth in the league in points and not have one person on the All-Star team is pretty bad. For me it is obviously disappointing."

While Arena is not solely responsible for selected the 13 additional players to the All-Star roster -- commissioner Don Garber gets to make two picks of his own -- the relationship he shares with Convey going back to their time together on the U.S. Men's National Team was expected to work in the midfielder's favor. After all, Convey is arguably in better form now than at any time during the lead up, and including, the 2006 World Cup.

"Bobby Convey is having the best season of his career," said Greg Lalas of MLSsoccer.com. "(Convey's) playing with a confidence he hasn't expressed in years. It is in 2010 in San Jose that he is reaching his full potential as an attack-minded winger. This is the Convey we all imagined we'd see -- if he'd stayed healthy -- blazing down the left wing in South Africa."

The ability to construct a 23-man roster that includes every worthy player is a near impossible task, but some of those that did get invited to face Man U. perhaps were not as qualified as Convey.

"You see teams we are way ahead of and they have two guys from their team," said Convey with a hint of frustration. "If it was an ‘all-star' team I would be bothered about it, but it is not necessarily an all-star team this year when you see guys make it that played 4 games and 6 games, so of course it is disappointing."

Aside from Jamie Moreno -- a player being rewarded not for the 2010 season, but a career that spans back to the inaugural MLS season in 1996 -- a couple of the players that Convey alludes to as being the most out of place on the squad are perhaps Shalrie Joseph and Brad Davis. Unfortunately, as has often been the case with previous All-Star games, statistics are not the only measure for being selected.

"I wouldn't say it was a snub against Bobby (Convey)," explained Earthquakes head coach Frank Yallop. "It is just choices by the fans, and Bruce (Arena) chooses the subs. Many a good player has been overlooked for the All-Star team in the past. If you are not selected there is nothing you can do about it. Still, he has played well for us."

Perhaps changes will need to be made to the 23-man roster in the week leading up to the All-Star game, and maybe Convey will still get the invite to travel to Houston. Players may drop from the team due to injuries or decide they want to concentrate on their club teams. Additionally, in an unusual provision in the league's Collective Bargaining Agreement, MLS will announce the selection of 9 players later this week as "inactive" All-Stars, opening up the possibility that Convey and other Earthquakes could still be recognized.

"If you are second in the league, the entire league, in assists," defended Convey, "and (Chris) Wondolowski is third or fourth in scoring, we have completed changed this season. Last year we had only one win at this time, and now this season we have six. It's pretty bad that no one on our team is going to be in the all-star game."

However, first up for he and the Earthquakes is a trip to Los Angeles to face the Galaxy tomorrow night. With Arena patrolling the opponent bench, might Convey see this as a good opportunity to show the coach what he will be missing on his All-Star team?

"It's definitely a motivation (to play in front of All-Star coach Bruce Arena) to see what we can do," Convey explained. "If we have a good performance it definitely shows we're serious. We may not be one of the bigger teams in the league; we are a smaller market, so that probably goes against everybody here. It will be good motivation to go against LA and do well."

Whether Convey takes his deserved place on the MLS All-Star roster, and is suited up to face Manchester United in Houston a week from today, is still to be determined. In the meantime, the Earthquakes and their supports will look ahead to the bigger picture -- a second half run toward the MLS Cup playoffs. In that endeavor, Convey is ready to lead the way.