Share All sharing options for: Gold Pride deliver a 4-0 Beat-down to Atlanta 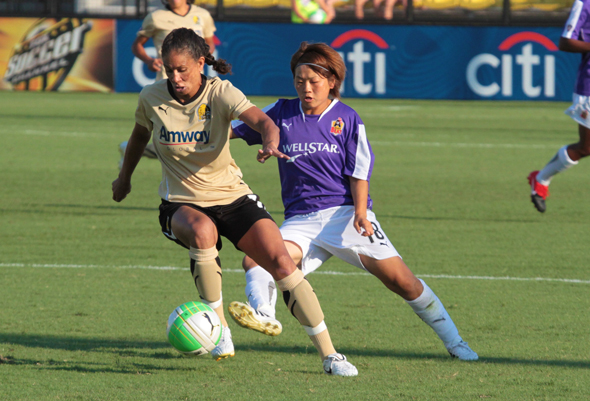 FC Gold Pride didn't mess around in its game with the Atlanta Beat. Just 40 seconds into the match, Christine Sinclair got out of her recent slump but sliding a shot past Hope Solo for a 1-0 lead.

Atlanta defense misplayed a ball, Tiffeny Milbrett ran onto the 50-50 ball in the box, but Solo came out to block her shot. Marta got the rebound about 15 yards from goal and played a square ball to Sinclair who freed up her right foot before slotting it in the side netting.

Shannon Boxx had a good strike on goal in the ninth minute for the Pride, hitting a strike first-time off a blocked Marta shot. However, Boxx's shot went just over the crossbar and out for a goal kick.

Atlanta's first chance at goal didn't come until the 16th minute when Mami Yamaguchi fired a shot from outside the box. It wasn't a problem for Pride keeper Nicole Barnhart however, who caught it with ease.

Three minutes later, the Beat made a quick counterattack after dispossessing Marta. Lori Chalupny took the ball up the left flank before cutting middle and switching fields to a wide open Leigh Ann Robinson. Robinson played a square ball to Yamaguchi in the box but her shot on net was weak and gobbled up by Barnhart.

Yamaguchi continued to pressure the Pride goal, taking a blocked Eniola Aluko shot and hitting it first time at goal. This time, Yamaguchi got all of the ball, firing it past Barnhart, but clanging it off the bar and out, keeping the Pride on top, 1-0.

Marta teamed up with Atlanta-native Kelley O'Hara in the 28th minute, with O'Hara getting behind the defense before being tripped up in the box. The ball ricocheted back to Sinclair who nailed a shot from 10 yards out but Solo was able to make a remarkable save, keeping the Beat within one.

But just two minutes later, Marta was fed into the box by O'Hara, and she was able to finish. Marta outraced the speedy Tina Ellertson, promptly faked her out of her boots, took a touch and hit a right-footed shot past Solo, off the low part of the crossbar and in for a 2-0 lead in the 30th minute.

With the 2-0 lead, the Pride were already in the driver's seat to getting a crucial road victory, but in the 33rd minute, their chances heightened when Kia McNeil was sent off with a straight red card for jumping into Barnhart cleats up. With McNeil's red card, the Pride played the final 57 minutes a man up.

Solo made another great save, keeping the Beat's hopes up, in the 39th minute. Kiki Bosio took a quick throw in to Marta, and the Pride had a three-v-two in the box. Marta switched the fields and O'Hara ripped a shot that Solo made a diving save on.

In Wednesday night's All-Star Game, Marta scored off Hope Solo twice. She had a chance for a second goal on Saturday in the 41st minute but Solo wouldn't budge. Marta beat Atlanta's defense to the loose ball flicked into space by Sinclair and was one on one with Solo. After a bevy of fakes, Marta unloaded her shot, but Solo was up to the task.

At the half, the Pride, thanks to goals by two of their WPS All-Star strikers, took a 2-0 lead into the locker room.

Up a man for the entire second half with a 2-0 lead, the Pride played more of a possession game, not really going for goal all that often. Atlanta, down in goals, and players, looked to be conceding the win, and played without a sense of urgency.

In the 59th minute, however, they did make a run at goal. Lori Chalupny got a through ball into the Pride 18-yard box, but was quickly shut down by Candace Chapman and the Beat were dispossessed.

Atlanta made another push for the Pride goal, again spearheaded by Chalupny. This time, in the 68th minute, Chalupny fet a through ball looking for Yamaguchi, but put too much heat on the pass and Barnhart was able to come off her line and grab the 50-50 ball.

Ali Riley made a dangerous tackle on the Beat's Yamaguchi, giving Atlanta a direct free kick from about 25 yards out in the 71st minute. Aya Miyama took the free kick, bending it over the Gold Pride wall and heading for the upper-90 but Barnhart leaped and deflected the ball off the crossbar and out for a corner that amounted to nothing.

Gold Pride got its first chance of the second half in the 80th minute. After the Beat cleared a free kick, the Pride regained possession and found O'Hara on the right flank. O'Hara sent a shot at goal that Solo made a diving save on, but the rebound went right to Sinclair. Her shot, however, was blocked out for a corner, keeping the score, 2-0 in the Pride's favor.

Gold Pride sealed the deal in the 86th minute. Play was halted on a Yamagughi hand ball just outside the Pride box. Buehler tapped the free kick to Barnhart who sent a ball long that went over everyone. Marta ran onto the ball, faked out Solo and slid it into the open net for a 3-0.

For good measure, the Pride scored again in the 89th minute. Boxx played a great through ball into Sinclair who, instead of shooting at net (one on one with Solo), elected to pass to O'Hara, who pounded in the Pride's fourth goal, which it would take to victory.